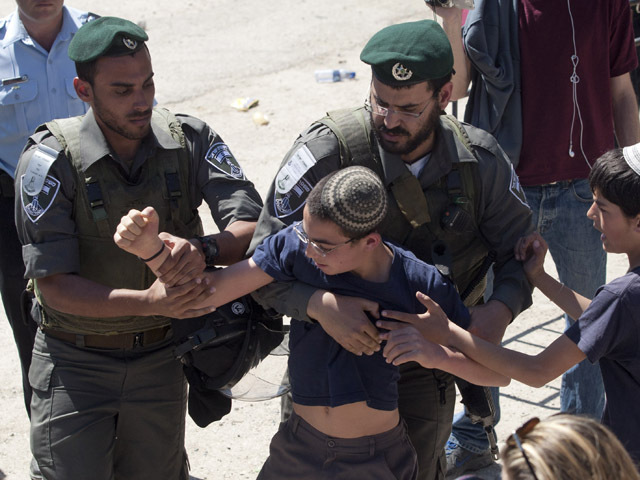 (AP) HEBRON, West Bank - Israeli security forces swiftly evicted dozens of Jewish settlers from an illegally occupied building in this volatile West Bank city on Wednesday, ending a weeklong standoff that had threatened to spill over into broader violence.

The raid caught the settlers off guard. Only a day earlier, Prime Minister Benjamin Netanyahu had moved to block the eviction order. Settler supporters in Netanyahu's hard-line government condemned the surprise raid, a key political ally threatened to quit the coalition and settler leaders vowed retaliation.

"He is expelling us from our property and land," said David Wilder, spokesman for Hebron's tiny, ultranationalist settler community. "We have no doubt, we will be back in that building. It belongs to us."

Hebron, the traditional burial site of Abraham, the shared patriarch of both Jews and Muslims, is the only place where Jews live in the heart of a Palestinian city. Arab-Israeli violence there dates back decades, and clashes are frequent.

About 850 settlers now live in Hebron in heavily guarded enclaves among 180,000 Palestinians. Hundreds of Israeli soldiers enforce a rigid separation between the two sides.

The settlers seized the home in an overnight raid last Thursday, claiming they had purchased it from a Palestinian landowner. But the military subsequently ordered them to leave the building because they had not received proper approval to live there.

After Netanyahu's call for a legal review of the matter on Tuesday, it appeared the evictions would be on hold. But government officials said Netanyahu's attorney general determined the home should be cleared out immediately.

Hundreds of police ringed the apartment building around midday on Wednesday. Settler leaders said about 70 people moved into the building last week. But only 15 or so, including children, were inside when the raid was launched, police spokesman Micky Rosenfeld said.

He said an eviction order was ripped up by one of the people inside, but otherwise there was no resistance.

Defense Minister Ehud Barak, who oversees the military occupation of the West Bank, promised to "continue to act to uphold the law and democracy while safeguarding the state's authority over its citizens."

Authorities were still investigating whether the house was legally purchased as the settlers claim, Barak said.

Barak heads a small, centrist faction in a government coalition that is otherwise dominated by hard-line parties sympathetic to Jewish settlers, who are intent on cementing Israel's control over the West Bank.

Foreign Minister Avigdor Lieberman, who heads nationalist Yisrael Beitenu party, said the decision to remove the settlers from the Hebron house "shakes the stability of the coalition and harms the ability for all parts of the government to live with each other."

Hebron settlers are among the most militant in the West Bank, territory they believe God promised to the Jews. The specter of an eviction had conjured up fears that settlers would rampage against security forces and Palestinians alike as they did after past evictions.

After Wednesday's raid, one of the most militant settler leaders, Baruch Marzel, warned of retaliatory attacks.

The raid came shortly after Netanyahu announced new moves to try to save unauthorized settler construction in the West Bank from demolition.

Netanyahu said he asked the attorney general to find a way to save the unauthorized Ulpana outpost from its Supreme Court-ordered demolition. Five apartment buildings are to be razed by May 1.

Netanyahu said he also plans to supply the necessary approvals to legalize three other enclaves settlers built without government authorization.

About 500,000 Jews have moved to the West Bank and east Jerusalem since Israel captured the territories in the 1967 Mideast war.

Palestinians want both territories as the heart of their hoped-for state and see all settlement there as undercutting their aspirations to statehood. The international community opposes all settlement construction.

Settlements in occupied territory have been the key sticking point since Netanyahu became prime minister three years ago.

Negotiations have been largely frozen during that time, though Netanyahu is to hold a rare meeting with Palestinian Prime Minister Salam Fayyad after the Jewish Passover holiday ends in late April, officials on both sides said.

Palestinian officials said Fayyad would present a letter asking to resume peace talks based on several conditions that Netanyahu has rejected in the past. They include basing border talks on the lines Israel held before capturing the West Bank, east Jerusalem and Gaza Strip in 1967 and recognizing east Jerusalem as the capital of a future Palestinian state.

Israel withdrew from Gaza in 2005 though it still controls its land crossing with the territory and blockades its coast.

In other developments, the Israeli military shot dead a Palestinian man who approached the Gaza Strip's border with Israel overnight. The military said it suspected he was a militant. There was no word on the man's identity.