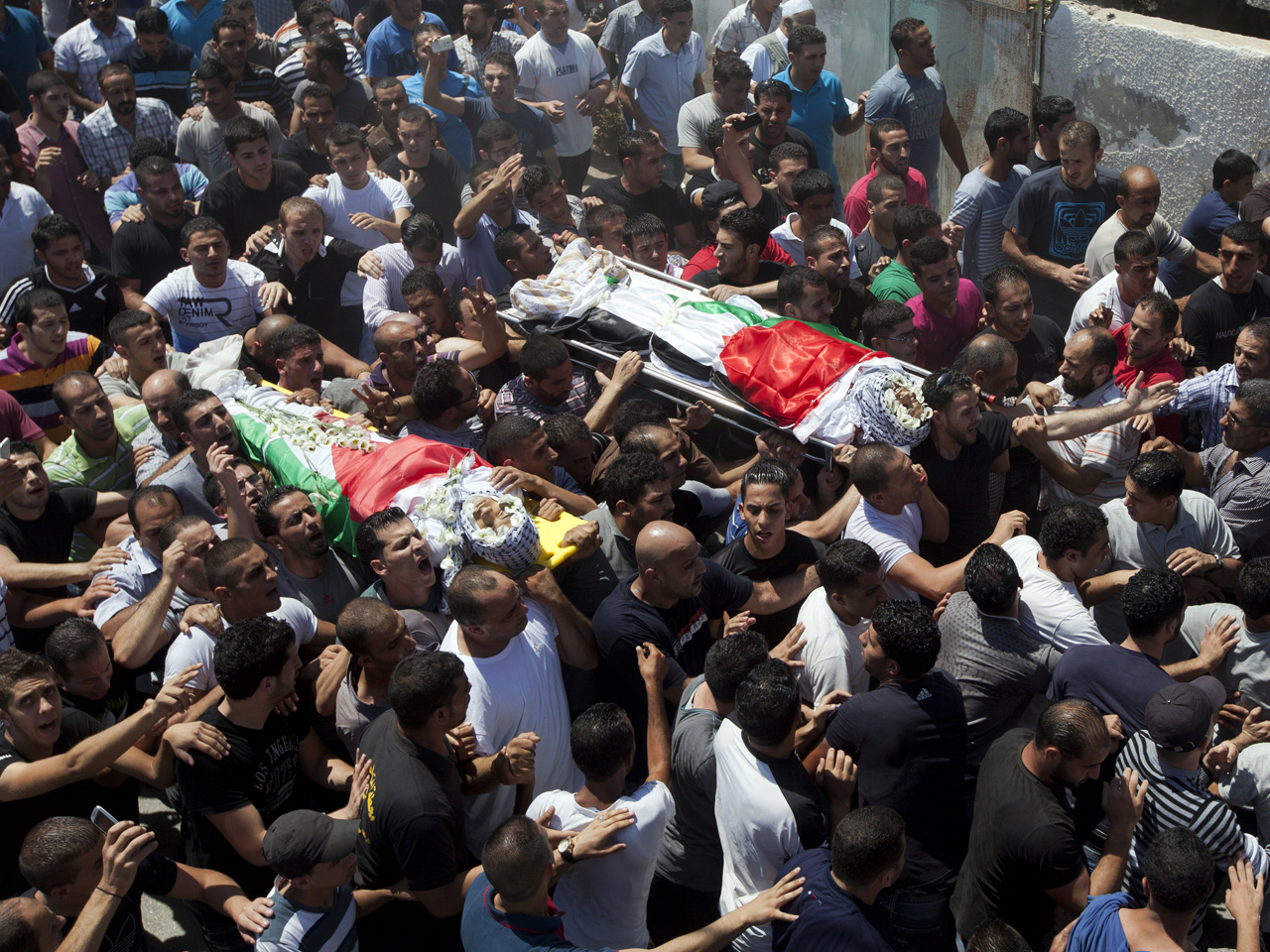 QALANDIA REFUGEE CAMP, West Bank Palestinian officials said they called off a planned round of peace talks Monday after Israeli soldiers killed three Palestinians -- including a United Nations aid worker -- during clashes following an arrest raid in the West Bank.

But in comments that suggested the meeting had gone ahead as planned, State Department deputy spokeswoman Marie Harf said that "no meetings have been canceled. We've been clear that the two parties are engaged in serious and sustained negotiations."

The violence, the deadliest incident in the area in years, dealt a new blow to U.S.-led peace efforts, which resumed late last month after a nearly five-year break. Palestinian officials have accused the Israelis of stonewalling and using the process as a cover to build new Jewish settlements. The deaths of Palestinians further soured the atmosphere.

It was not known when talks will resume, but Palestinian officials said the break was expected to be brief. They spoke anonymously as they were not authorized to talk to media.

Monday's clashes broke out when Israeli Defense Forces (IDF) entered the Qalandia refugee camp, just outside of Jerusalem, on an overnight arrest raid. Shai Hakimi, a spokesman for the paramilitary border police, said hundreds of Palestinians poured into the streets and hurled firebombs, concrete blocks and rocks at officers.

The Israeli military said soldiers rushed to the scene to provide backup and opened fire after they felt their lives were in "imminent danger."

An official at a Ramallah hospital confirmed three deaths and more than a dozen wounded. He spoke on condition of anonymity because he was not authorized to talk to the media.

According to a statement released by Chris Gunness, a spokesman for the United Nations Relief and Works agency in the Palestinian territories (UNRWA), staffer Rubin Zayed was on his way to work and was not engaged in the violence when he was shot fatally in the chest.

A senior U.N. official privy to the global body's internal investigation into the incident told CBSNews.com on Tuesday that, according to two eyewitnesses, Zayed, a 34-year-old father of four, was unarmed when the Israeli forces shot him in the chest.

According to the U.N. official, who spoke to CBSNews.com on the condition of anonymity to discuss the on-going investigation, there was "absolutely no question" that Zayed wasn't involved in any violence when he turned a corner on his way to work and a bullet went straight through his chest.

"As soon as he appeared in eye-shot of the IDF patrol, they literally shot him in the chest," said the official, calling it "hugely significant that an unarmed worker who was showing no involvement in any violence at all was shot dead."

The official said the incident "illustrates the overwhelming and disproportionate use of force" routinely employed by Israeli security forces in the occupied Palestinian territories.

According to eyewitnesses interviewed by UNRWA, the Israeli forces "opened fire randomly" on Palestinians in the camp during the melee, even shooting indiscriminately into the windows of homes that opened during the clashes.

The U.N. official said 12 people remained hospitalized after the shooting, five of them in critical condition.

Asked by CBS News about the allegations on Tuesday, an Israeli military source would say only that the defense forces own review "suggests that all three of the individuals that died from injuries were actively engaged in the violent riot against IDF forces as they apprehended a terrorist."

Hatim Khatib, whose brother Youssef was arrested in the raid, told The Associated Press that undercover troops dressed in civilian clothes arrived at their home at 4:30 a.m. looking for the brother.

"After half an hour we started hearing shooting from the soldiers inside our house, and then people started throwing stones at them," he said.

Youssef was arrested after he returned from morning prayers at 7:00 a.m., he said.

He said he didn't know why his brother was the only one arrested but said Youssef had spent time in Israeli jail for throwing rocks and was released three years ago. The Israeli military would not say why he was wanted.

The violence drew fierce Palestinian condemnations. "Such a crime proves the need for an urgent and effective international protection for our people," Prime Minister Rami Hamdallah said in a statement.

Shortly afterward, Palestinian officials said that a planned round of peace talks had been called off. They said the Palestinians were protesting the day's violence, and were also upset by an Israeli announcement Sunday that it was pushing forward with new settlement construction in east Jerusalem.

The Palestinians object to construction in the West Bank and east Jerusalem, the lands they claim along with the Gaza Strip for their future state. Israel captured all three territories in 1967. It was not immediately known when talks would resume.

A Palestinian official said the talks have gotten off to a rocky start, with the sides still arguing over the agenda.

The Palestinians want discussions to focus on security issues and the border between Israel and a future state of Palestine. The official said the Israelis have insisted on limiting talks only to security matters. He spoke on condition of anonymity because both sides have promised U.S. Secretary of State John Kerry to keep the details of the negotiations secret. Israeli officials declined comment.

Kerry is expected to meet Israel's prime minister, Benjamin Netanyahu, in Rome on Sept. 8 to help push negotiations forward, according to Israeli and Palestinian officials.

The State Department said it was still seeking details on the deadly clashes but that both sides should move forward with talks and exercise restraint.

"These incidents underscore exactly why a final status agreement is even more important to address these issues at the negotiating table and why we're working so hard to help the two parties do that," said Harf.