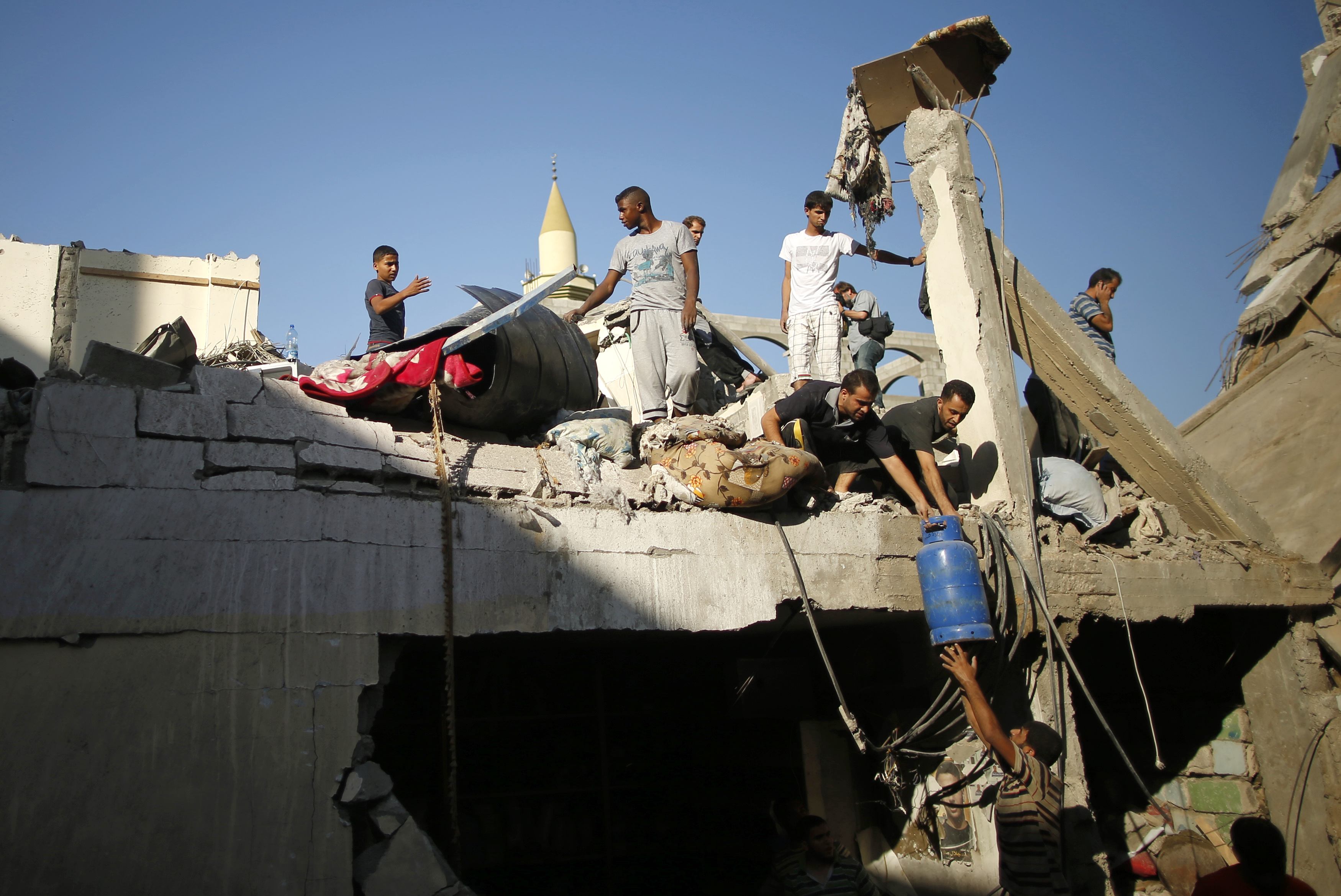 GAZA CITY, Gaza Strip -- An Israeli airstrike in Gaza killed three senior commanders of the Hamas military wing on Thursday, the group said, in what is likely to be a major blow to the organization's morale and a significant achievement for Israel's intelligence agency.

Israel said Abu Shamaleh had been the top Hamas commander in southern Gaza, overseeing fighters there during the current war. Attar was in charge of weapons smuggling into Gaza and the construction of attack tunnels, the Israeli military said.

In 2006, Attar was involved in the capture of an Israeli soldier, Gilad Schalit, through such a tunnel, said the statement. It did not refer to Barhoum.

The Rafah attack came just a day after an apparent Israeli attempt to kill the top Hamas military leader, Mohammed Deif, in an airstrike on a house in Gaza City.

Deif's wife and an infant son were killed in that strike, but the Hamas military wing, the Izzedine al-Qassam Brigades, said Deif was not in the targeted home at the time and was alive.

The back-to-back targeting of top Hamas military leaders came after indirect Israel-Hamas negotiations in Cairo on a sustainable truce broke down.

As talks ran aground on Tuesday, Gaza militants resumed rocket fire on Israel, even before the formal end of a six-day truce at midnight that day.

Since then, Hamas and other groups have fired dozens more rockets, and Israeli aircraft have struck dozens of targets in Gaza, a sign that prospects for a resumption of the Cairo talks are slim.

Despite the crisis, Palestinian President Mahmoud Abbas was holding talks in Qatar on Thursday with the top political leader of Hamas in exile, Khaled Mashaal, and the emir of Qatar. Before the collapse of the truce talks, Abbas had planned to use the meetings in Qatar to urge Mashaal and his Qatari backers to support an Egyptian cease-fire plan.

Hamas has since rejected the Egyptian proposal, saying it contained no specific commitments by Israel to ease the border blockade of Gaza. The blockade had been imposed by Israel and Egypt after the violent Hamas takeover of Gaza in 2007.

Hamas leaders said they could not return to Gaza from Cairo with a deal they feared would simply restore the closure regime that was in place before the start of the latest round of fighting on July 8. The border restrictions prevent most Gazans from traveling outside the crowded coastal strip and bar most exports.

Over the past six weeks, more than 2,000 Gaza residents have been killed and about 100,000 left homeless, according to figures by the U.N. and Palestinian officials. Israel lost 67 people, all but three of them soldiers.

It was not clear if Thursday's targeted killing of the three Hamas leaders will prompt a change in the group's strategy or diminish its ability to fire rockets. Israel estimated that Hamas had about 10,000 rockets before the war and that it lost about two-thirds of its arsenal.

Thursday's airstrike on the house in the Tel Sultan neighborhood of Rafah was carried out shortly before 3 a.m.

Gaza police said a number of Israeli aircraft were involved, and that at least 12 missiles hit the four-story building. The Israeli military declined comment on the report.

In addition to the Hamas operatives, three others were killed, including a resident of the house and two neighbors, according to Palestinian health official Ashraf al-Kidra.

At least six people, including four children and a 27-year-old man, were killed in three other airstrikes across Gaza, according to al-Kidra.

Israel also hit at smuggling tunnels along the Gaza border with Egypt and at agricultural lands west of Rafah in the latest airstrikes.

The military said 18 rockets and mortars were fired from Gaza since midnight Wednesday, compared to more than 210 over the previous 30 hours.

One Israeli was seriously injured when a mortar hit south of the southern city of Ashkelon on Thursday, it said.

"We are determined to continue the campaign with all means and as is needed," he said, his defense minister by his side. "We will not stop until we guarantee full security and quiet for the residents of the south and all citizens of Israel."

The Egyptian Foreign Ministry expressed "deep regret" over the breaking of the cease-fire. It said in a statement Wednesday that it "continues bilateral contacts" with both sides aimed at restoring calm and securing a lasting truce.

The Egyptian compromise proposal called for easing the Gaza blockade but not lifting it altogether or opening the territory's air and seaports, as Hamas has demanded.

While the plan does not require Hamas to give up its weapons, it would give the Western-backed Abbas, whose forces were ousted by Hamas from the Gaza Strip, a foothold back in the territory, running border crossings and overseeing internationally backed reconstruction.