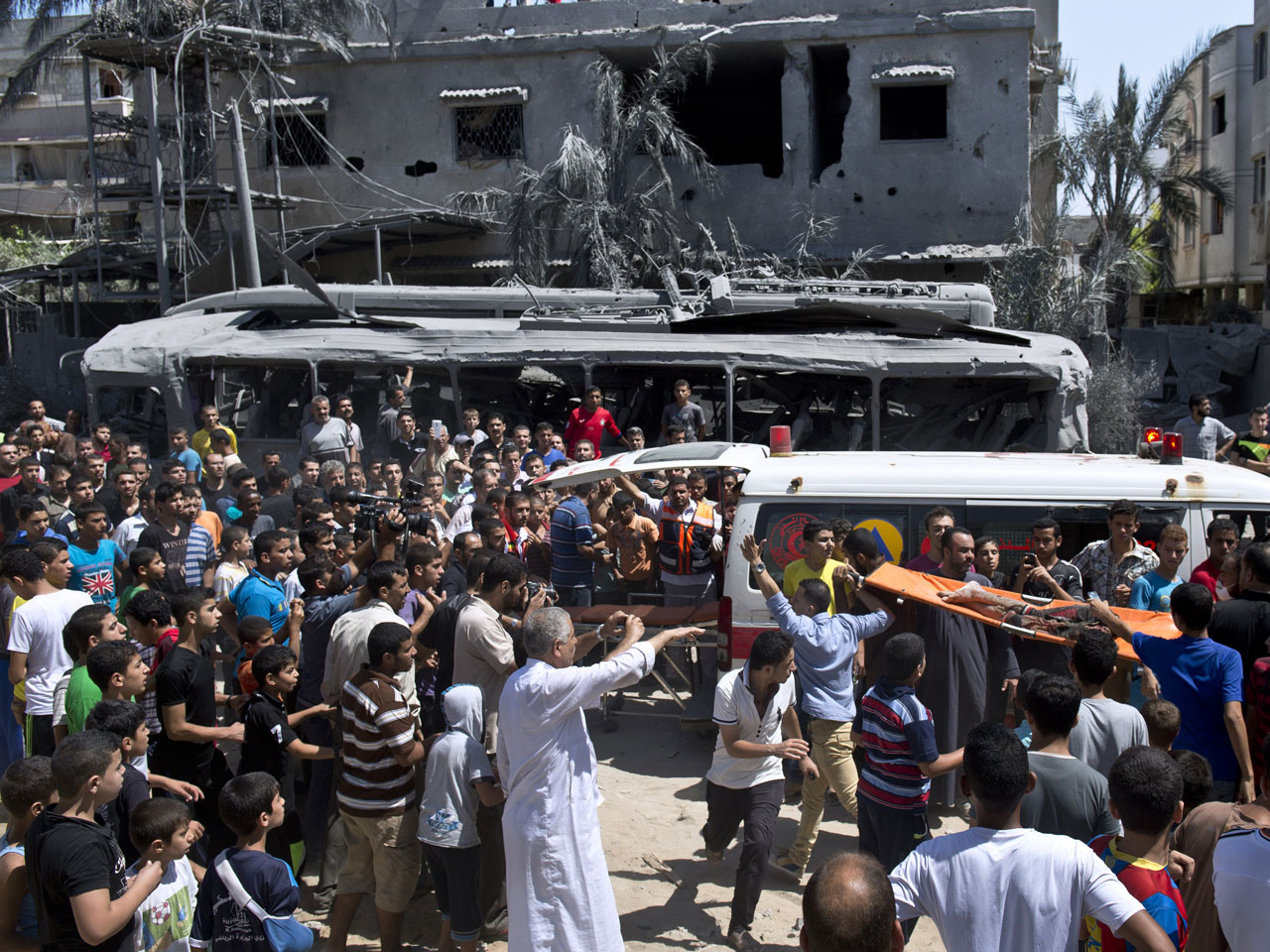 The airstrike on a home where Mohammed Deif's family members were staying - and the tough talk from Prime Minister Benjamin Netanyahu - came after the collapse of cease-fire talks in Cairo on Tuesday.

In a nationally televised address, Netanyahu showed little willingness to return to the negotiating table after six weeks of war with Hamas.

"We are determined to continue the campaign with all means and as is needed," he said, his defense minister by his side. "We will not stop until we guarantee full security and quiet for the residents of the south and all citizens of Israel."

More than 2,000 Palestinians have been killed in the fighting, most of them civilians, according to U.N. and Palestinian medical officials. Sixty-seven people have died on the Israeli side, all but three of them soldiers.

A six-day temporary truce collapsed into heavy fighting after Egyptian-mediated talks broke down without an agreement on an extended cease-fire. Hamas has demanded an end to an Israeli-Egyptian blockade of Gaza. Israel has demanded that Hamas disarm.

Palestinian militants launched dozens of rockets into Israel, while Israel carried out numerous airstrikes across Gaza. One airstrike on a Gaza City house killed Deif's 7-month-old son and one of his wives.

After remaining quiet for most of the day Wednesday, Hamas officials announced that Deif was not in the targeted home at the time and was still alive. Deif has survived multiple assassination attempts, lives in hiding and is believed to be paralyzed from previous attempts on his life.

Abu Obeida, the spokesman for Hamas' military wing, said Israel was "unable to get to our commander Deif," adding that he will "lead the army that will enter to liberate the holy al-Aqsa mosque" in Jerusalem.

Asked whether Deif had been targeted, Netanyahu said: "The leaders of terror organizations are legitimate targets. No one is immune."

The house belonged to a family of known Hamas supporters. In footage taken after the strike, rescue workers were seen searching for survivors in the rubble where the building once stood.

Thousands of people attended the funeral for Deif's family, with a relative carrying the body of his son, shrouded in a white burial cloth. Mourners chanted "revenge" during the procession.

Since the truce collapsed, at least 22 Palestinians have been killed and more than 120 wounded, Gaza Health Ministry official Ashraf al-Kidra said.

The Israeli military said that it carried out nearly 100 airstrikes on Gaza targets, and that Palestinians had fired more than 140 rockets at Israel since the truce fell apart. About 2,000 reserve soldiers who had been sent home two weeks ago were called up for duty again Wednesday, the military said.

Air raid sirens wailed in southern Israeli cities Wednesday morning, warning of incoming rockets from Gaza. There were no reports of injuries, though a piece of a rocket that was intercepted near Tel Aviv fell on a busy road on Tuesday night.

Israel ordered the reopening of public bomb shelters within 50 miles (80 kilometers) of Gaza.

In the talks, Hamas sought an end to a crippling Israeli-Egyptian blockade imposed when it seized power in Gaza in 2007, while Israel wanted guarantees that the Islamic militant group would disarm.

On Wednesday, the Egyptian Foreign Ministry expressed "deep regret" over the breaking of the cease-fire. It said in a statement that it "continues bilateral contacts" with both sides aimed at restoring calm and securing a lasting truce that "serves the interest of the Palestinian people, especially in relation to the opening of the crossings and reconstruction."

An Egyptian compromise proposal calls for easing the blockade but not lifting it altogether or opening the territory's air and seaports, as Hamas has demanded.

While the plan does not require Hamas to give up its weapons, it would give Western-backed Palestinian President Mahmoud Abbas, whose forces were ousted by Hamas, a foothold back in Gaza running border crossings and overseeing internationally backed reconstruction.

The Gaza blockade has greatly limited the movement of Palestinians in and out of the territory of 1.8 million people, restricted the flow of goods into Gaza and blocked virtually all exports.

Israel says the blockade is needed to prevent Hamas and other militant groups from getting weapons. Critics say the measures amount to collective punishment.