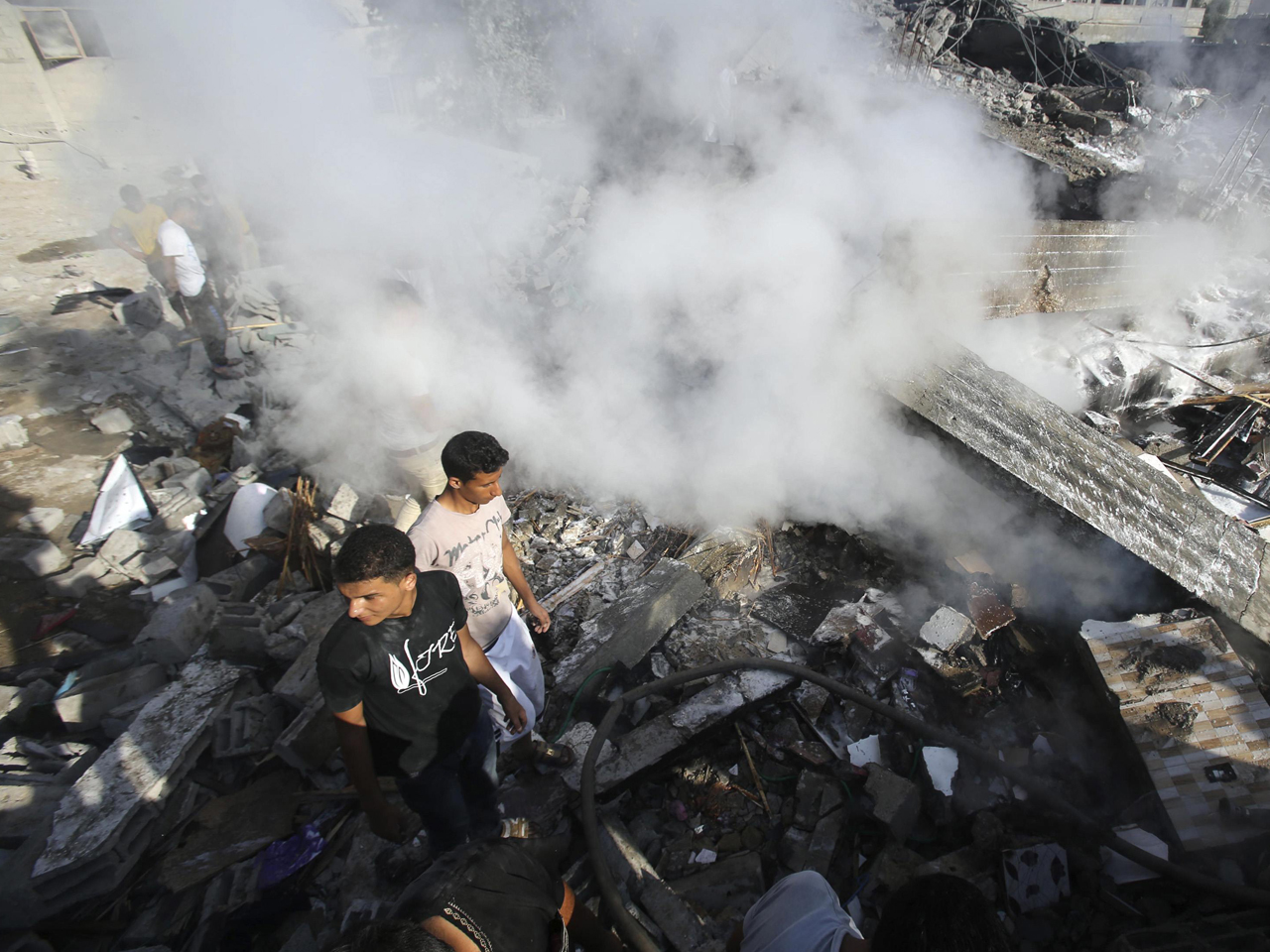 GAZA CITY, Gaza Strip -- Palestinian militants launched dozens of rockets and Israel responded with airstrikes on Wednesday after Egyptian efforts to mediate a lasting truce in the monthlong Gaza war collapsed in a hail of fire a day earlier.

One of the Israeli airstrikes appeared to have targeted the home of Mohammed Deif, the elusive military chief of the Hamas Islamic militant group, who has escaped numerous Israeli assassination attempts in the past. There was no indication that Deif himself was home at the time of the strike.

Three people -- two women and a two-year-old girl -- were killed in an airstrike on the house in Gaza City, Gaza Health Ministry official Ashraf al-Kidra said. In Cairo, Moussa Abu Marzouk, a senior Hamas leader, said the dead included the wife and a child of Deif. There was no immediate confirmation from Hamas leaders in Gaza.

Israel has not formally commented on the strike but local media quoted an anonymous official as saying it was meant to hit Deif.

Yaakov Peri from the centrist Yesh Atid party, a former director of Israel's security service, said he doesn't have any details about Deif but that his house would have only been hit for a reason.

"If there was intelligence information that Mohammed Deif was not at home then the house would not have been blown up," he told Army Radio.

"With the assumption that Israel was behind this, it shows its intelligence capabilities...and it is an important indication that no head of the Hamas military wing is immune to a targeted killing," he said.

He said a security cabinet meeting would be held Wednesday afternoon to discuss developments.

Rabah Al-Dalou, the owner of the house where Deif's family members were killed, told the Associated Press there were still people missing under the rubble.

"I have some family members missing: my wife, and my two sons, also a girl and a boy are missing from the neighbors' family, they are still under the rubble and haven't been removed yet," he told AP Television News.

The fighting resumed Tuesday when Gaza militants fired rockets at Israeli cities just hours before a temporary cease-fire was set to expire, prompting Israel to withdraw its delegation from Cairo and launch retaliatory airstrikes. Since then at least 10 Palestinians have been killed and 68 wounded, Gaza Health Ministry official Ashraf al-Kidra said.

The Israeli military said it carried out some 60 airstrikes on Gaza targets, and that Palestinians had fired at least 70 rockets at Israel since the temporary truce collapsed. About 2,000 reserve soldiers who had been sent home two weeks ago when fighting seemed to have simmered down were called up for duty again Wednesday, the military said.

The breakdown in talks and the resumption of violence marked a bitter ending to nearly a week of Egyptian-led diplomacy meant to end the war, which has reduced entire Gaza neighborhoods to rubble and claimed more than 2,000 lives, mainly Palestinians.

The violence left the Egyptian mediation efforts in tatters and raised the likelihood of a new escalation in a war that has already claimed more than 2,000 lives, most of them Palestinians. Palestinian negotiators said the talks were finished.

Twenty-one people were wounded in a separate airstrike that hit a building that houses offices of Hamas' Al-Aqsa TV station, al-Kidra, of the Hamas run Gaza Health Ministry, said.

There were no reports of injuries, though a piece of a rocket that was intercepted near Tel Aviv fell on a busy road Tuesday night.

Egyptian security officials said Cairo was still pressing the two sides to agree on a cease-fire. They spoke on condition of anonymity because they were not authorized to speak to the press.

More than 2,000 Palestinians, most of them civilians, have been killed since the war began on July 8, according to Palestinian and U.N. officials, and tens of thousands of people have been left homeless.

Israel says the number of militants killed was much higher, and it blames Hamas for causing civilian casualties by staging attacks from residential areas. Sixty-four Israeli soldiers, two Israeli civilians and a guest worker from Thailand have also been killed.

Hamas is seeking an end to a crippling Israeli-Egyptian blockade tightened when it seized power in Gaza in 2007, while Israel wants guarantees that the Islamic militant group will disarm.

In nearly a week of indirect talks, Egypt appears to have made little headway in resolving the differences. Late Monday, it secured a 24-hour extension to a temporary truce to allow more time for a last-ditch attempt to reach a longer-term deal.

On Wednesday the Egyptian Foreign Ministry expressed "deep regret" over the breaking of the cease-fire. It said in a statement that it "continues bilateral contacts" with both sides aimed at restoring calm and securing a lasting truce that "serves the interest of the Palestinian people, especially in relation to the opening of the crossings and reconstruction."

An Egyptian compromise proposal calls for easing the blockade, but not lifting it altogether or opening the territory's air and seaports, as Hamas has demanded.

While the plan does not require Hamas to give up its weapons, it would give Western-backed President Mahmoud Abbas, whose forces were ousted by Hamas in 2007, a foothold back in Gaza running border crossings and overseeing internationally-backed reconstruction.

Abbas' involvement would minimize friction with Israel and allow large amounts of international aid to flow into Gaza for reconstruction.

The disagreements have focused around the lifting of the blockade, with Hamas pushing for far more dramatic concessions than Israel is willing to offer.

The Gaza blockade has greatly limited the movement of Palestinians in and out of the territory of 1.8 million people, restricted the flow of goods into Gaza and blocked virtually all exports.

Israel says the blockade is needed to prevent Hamas and other militant groups from getting weapons, but critics say the measures have amounted to collective punishment.

The latest round of Gaza fighting was precipitated by Israel's arrest of hundreds of Hamas members in the West Bank in the aftermath of the abduction and killing of three Israeli teenagers in June. Their deaths were followed by the slaying of a Palestinian youth in Jerusalem in what was a likely revenge attack.