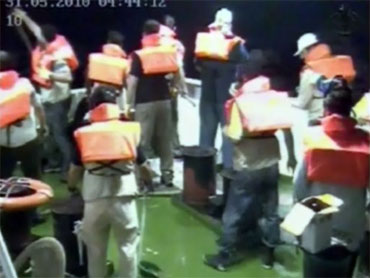 Israel's military is using video confiscated from people on the Gaza-bound aid flotilla to justify opening fire during its deadly raid on the ships, drawing sharp criticism Thursday from foreign correspondents who say some of the footage was shot by journalists.

The military allowed some journalists to board vessels used in the raid, and several dozen reporters were on board the flotilla's six ships as well. Video of the operation is playing a major role in Israel's and pro-Palestinian activists' efforts try to push their version of events.

Israel says the commandos resorted to force only after activists attacked them with knives, crowbars and clubs, as well as two pistols wrested from soldiers. Activists who had set sail for Gaza with 10,000 tons of aid, hoping to break Israel's 3-year-old blockade of Gaza, say the commandos fired first.

The Foreign Press Association, which represents hundreds of journalists in Israel and the Palestinian territories, demanded Thursday that the military stop using the captured material without permission and identify the source of the video already released.

"The Foreign Press Association strongly condemns the use of photos and video material shot by foreign journalists, now being put out by the (military) spokesman's office as 'captured material'," the FPA said in a statement. It said the military was selectively using footage to back its claims that commandos opened fire only after being attacked.

Videos released by the army have shown the commandos' descent onto the ship and then their clash with the activists.

The "captured" footage was filmed on board the ship during the operation. One video shows commandos in a boat beside the Mavi Marmara, with activists apparently spraying jets of water at them and then a large flash - what the army says is a stun grenade launched at the soldiers.

Another video shows a man being interviewed, saying that he wants to become a martyr. A microphone bearing the logo of Iran's state-run Press TV points up at him.

Army spokeswoman Avital Leibovich said there was "a certain chance" the footage was filmed by journalists, but that most was filmed by activists. She said no material was confiscated. She said it was found on the vessel after activists were cleared off by the army.

The activists on the flotilla hoped to break Israel's blockade of the Gaza Strip, imposed after the militant Hamas group violently seized power in the territory three years ago.

Israel says the blockade is meant to keep weapons out of Gaza and to put pressure on its Hamas rulers. But weapons and other goods continue to reach Gaza through underground tunnels with Egypt, and many Gazans blame Israel, not Hamas, for their hardships.

One of the nine people killed in the Israeli raid on an aid flotilla Monday was a 19-year-old man with dual U.S.-Turkish citizenship, a U.S. State Department official said.

The official identified the victim as Furkan Dogan, who was believed to have been residing in Turkey.

The official spoke on condition of anonymity because the matter has not been officially confirmed by the U.S. government.

The official said the victim had been shot but it was not clear who shot him. He was among eight of the dead being mourned at a funeral in Istanbul Thursday.

Mourners in Istanbul hoisted coffins Thursday to cheers of "God is great!" as they honored the slain activists. The father of the lone American killed praised his teenage son as being a martyr for a just cause.

"I feel my son has been blessed with heaven," he said. "I am hoping to be a father worthy of my son."

Some 10,000 people prayed Thursday outside Istanbul's Fatih mosque before eight Turkish and Palestinian flag-draped coffins lined up in a row in a traditional service for the dead. Eight Turks along with Furkan were honored, ranging in age from over 60 to 19. A ninth victim, a Turkish man, was having a service on Friday.