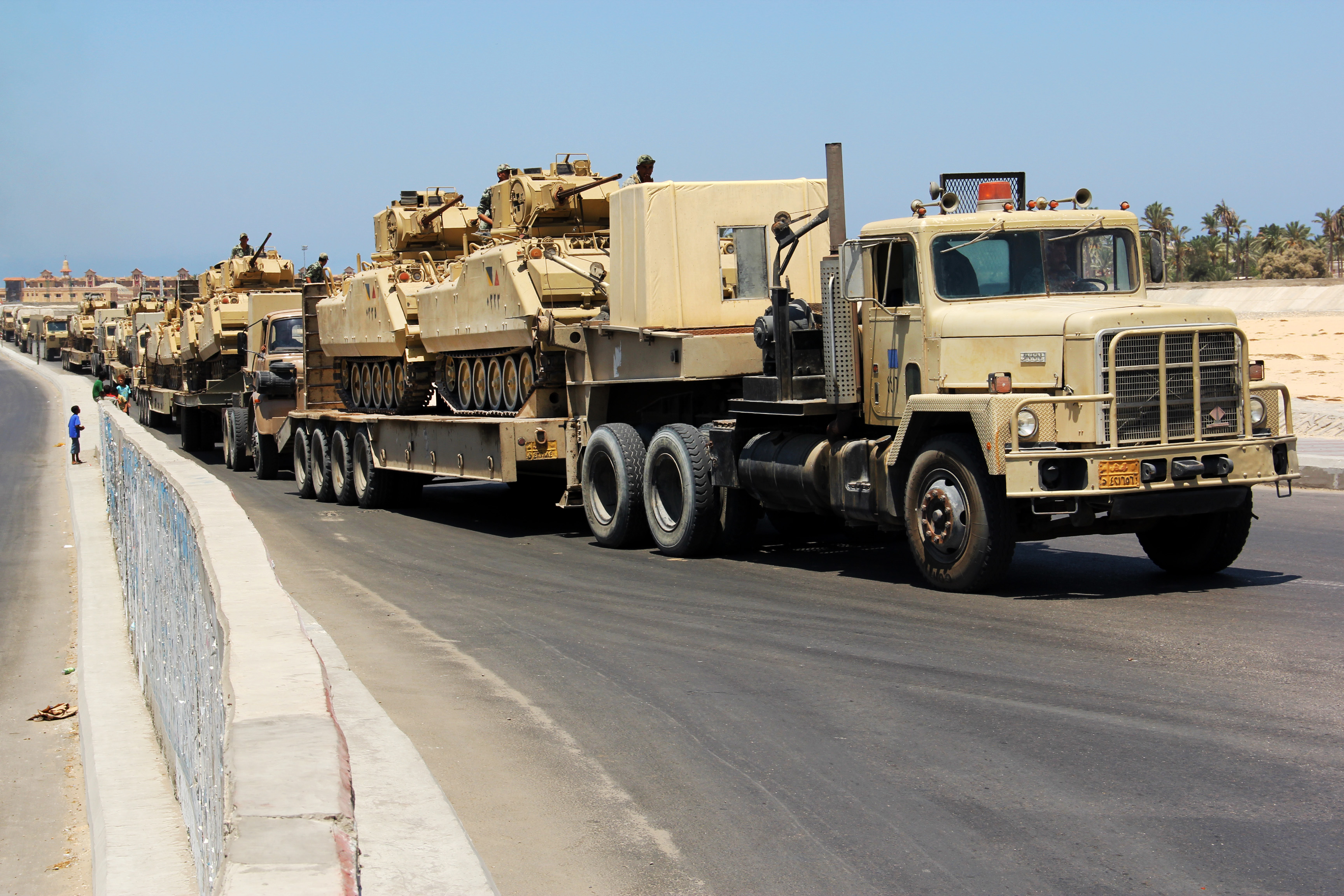 (AP) JERUSALEM - Israeli officials said Tuesday that Egypt is violating the historic 1979 peace treaty between the two countries by deploying tanks in the demilitarized Sinai desert near the Israeli border.

The officials said they have relayed their objections to the Egyptians directly and through American mediators. An Egyptian border official confirmed that his Israeli counterparts had voiced concerns.

Egypt has been building up its military presence in the lawless area since Islamic militants there attacked an army post on Aug. 5 and killed 16 soldiers.

Under the peace accord, Egypt was only allowed to have lightly armed policemen in the zone along the border with Israel. Limited numbers of tanks were permitted only in a zone on the far western side of the peninsula, within 30 miles of the Suez Canal.

Israel, which also views the Islamic militants as a threat, agreed last year to exceptions to the treaty allowing Egypt's military to deploy troops with heavier weaponry into the most sensitive zone of eastern Sinai close to the border.

Egyptian troops moved in after the Aug. 5 attack, backed by armored personnel carriers and attack helicopters, in coordination with the Israelis. However, the Israeli officials alleged that the deployment of heavier M60 battle tanks went further than agreed and violated the accord. The Israelis say they should have been consulted.

The Israeli and Egyptian officials spoke on condition of anonymity because they weren't authorized to brief reporters.

The peace accord has been a cornerstone of regional stability for three decades, allowing Israel to divert its resources away from the Egyptian border and focus on its fronts with Lebanon, Syria and the Palestinian territories. It was Israel's first peace agreement with an Arab state.

The fundamentalist Islamic group has said Egypt will continue to abide by the accord but repeatedly called for changes in the treaty's limits on troops in Sinai, seen as humiliating.

The Israeli officials said the new tank deployment does not pose a direct threat to Israel, but they fear that Egypt is trying to set a precedent for future modifications in the peace deal. Morsi also recently sacked Egypt's military chief, removing a key figure in what has historically been a close security relationship with Israel.

An Egyptian security official confirmed that some M60 tanks are now located in the Sinai near the port of El-Arish. He said the vehicles are there solely to protect the city, which is roughly 30 miles from the Israeli border. The exact number of the tanks was not immediately known.

Egyptian presidential spokesman Yasser Ali denied receiving any complaints from Israeli. "Security Sinai is among Egypt's national security priorities, and nothing can stand in front of this," he said.

When asked if this means Egypt can send troops regardless of Israeli's approval or objection, he declined to answer.

But an Egyptian intelligence official confirmed a meeting with his Israeli counterparts to discuss the issue. "We sat together. They said, `We are worried about the military presence in Sinai," the official said.

The peace accord permitted "no more than one division (mechanized or infantry) of Egyptian armed forces" within 30 miles of the Suez Canal. El-Arish is well beyond that radius.

Eli Shaked, a former Israeli ambassador to Cairo, said it's a joint Israeli and Egyptian interest to keep the Sinai quiet, so he didn't expect the issue to turn into a major crisis. "In the final analysis, the Egyptian military is coordinating with Israel, but I cannot say for certain when that is done or how," he said.