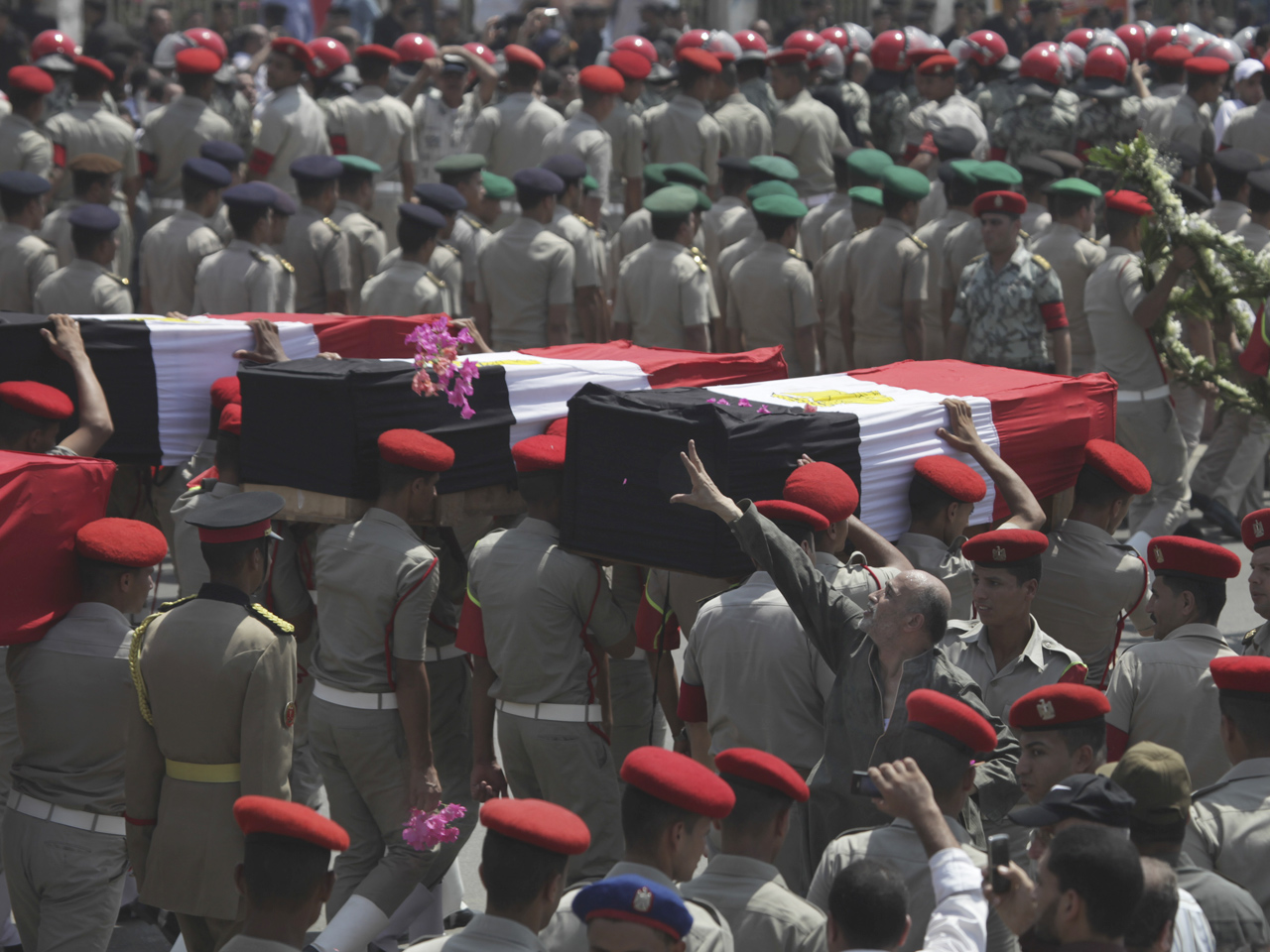 (AP) CAIRO - Egypt on Tuesday buried the 16 soldiers killed by suspected Islamist militants near the borders with Gaza and Israel, as pressure built on Egypt's president not to ease restrictions on the Palestinian territory and to seek amendments in the peace treaty with Israel to allow more Egyptian troops on the border.

The funeral ceremonies were disrupted by pro-military hecklers who chanted slogans against President Mohammed Morsi of Egypt's Muslim Brotherhood and Gaza's Hamas rulers. Both Islamist groups condemned the killings, but the deadly attack is likely to prevent any relaxation of security along the border and fuel Egyptian fears of Palestinian militancy spilling across.

Mourners prayed for the dead at a mosque in an east Cairo suburb. Then the coffins, wrapped in Egypt's red-white-and-black flag, were taken to a nearby square where a military ceremony led by Defense Minister Hussein Tantawi was conducted.

The military has said that 35 gunmen attacked an Egyptian border post Sunday, killing the 16 before commandeering an armored vehicle they later used to try to storm across the border into Israel. It has accused Palestinians from Gaza of aiding the gunmen by firing mortar shells at a nearby border post just as they were attacking.

Many blamed the limitations in the Egypt-Israel peace deal for leaving the Sinai Peninsula with limited protection. The 1979 treaty restricts the number of troops and type of weapons Egypt can deploy, especially in the border area.

At the time, Israel insisted on the limits in exchange for giving up control of the Sinai, a wide buffer zone between Israel and Egypt. Since violent Islamic extremists began gaining strength there after the fall of longtime President Hosni Mubarak last year, Israel has approved sending additional Egyptian forces to the Sinai, above the treaty limits.

Israeli Foreign Minister Avigdor Lieberman said Tuesday that Israel gave permission for an extra 3,500 Egyptian troops to be sent in.

According to the treaty, only peacekeeping forces and Egyptian civil police are allowed into the border area. There are no limits on the number of police, who can be armed with assault rifles.

In 2005, Israel agreed to allow Egypt to deploy 750 troops to act as border guards after Israel's withdrawal from Gaza Strip.

"The national (political) forces stressed during its meeting with the president the necessity of reconsidering the military and security arrangements in order to achieve full Egyptian sovereignty on the land of Sinai," said Mohammed el-Beltagi, a senior member of the Muslim Brotherhood who attended the meeting.

Morsi's spokesman Yasser Ali told reporters, "the state respects international accords but at the same time serves the interest of the nation and the Egyptian citizens."

Israel has been concerned that the Brotherhood, which is traditionally hostile to Israel, might move to cancel the treaty.

The attackers were believed to be part of a low-level Islamist insurgency that has been active in Sinai for a decade, and which is allied with al-Qaida-inspired groups of militants in both Gaza and Sinai.

Morsi's Muslim Brotherhood and Gaza's Hamas come from a different Islamist political tradition than the al-Qaida-inspired militants. Hardcore military backers among the mourners nonetheless appeared to hold them responsible for the deaths.

"The Brotherhood and Hamas are one dirty hand," some chanted.

With animosity against the Brotherhood riding high, Morsi did not attend the funeral. His spokesman Ali said that the president, who is accompanied by a security detail, did not want his presence to impede "popular participation." The president had visited the scene of the attack the day before.

Prime Minister Hesham Kandil did attend the funeral and was heckled by mourners. Some pelted him with shoes, while others held their shoes high, pointing their soles at him in a gesture of contempt, before he was whisked away by aides.

Kandil is not a Brotherhood member, but he is a devout Muslim said by some media reports to be sympathetic to the group.

Several vehemently anti-Muslim Brotherhood and pro-military television personalities and politicians have tried to use the attack to rally people behind their public campaign against Morsi.

Morsi has sought to reverse ousted leader Hosni Mubarak's hardline policy toward Hamas, promising to ease the hardship endured by Gaza's 1.6 million residents as a result of years of siege by Mubarak's Egypt and his Israeli allies.

The new president has promised to open the Rafah border crossing - Gazans' only gateway to the outside world - round the clock and allow goods to move to and out of the coastal territory. With their shared enmity for Israel, Morsi and Gaza's rulers had appeared ready to strike an enduring alliance.

But Sunday's attack and the Egyptian military's assertion of Palestinian involvement may already have undermined that prospect. If Morsi maintains close ties with Hamas now, he could come under criticism for prioritizing the Brotherhood's agenda over the nation's interests.