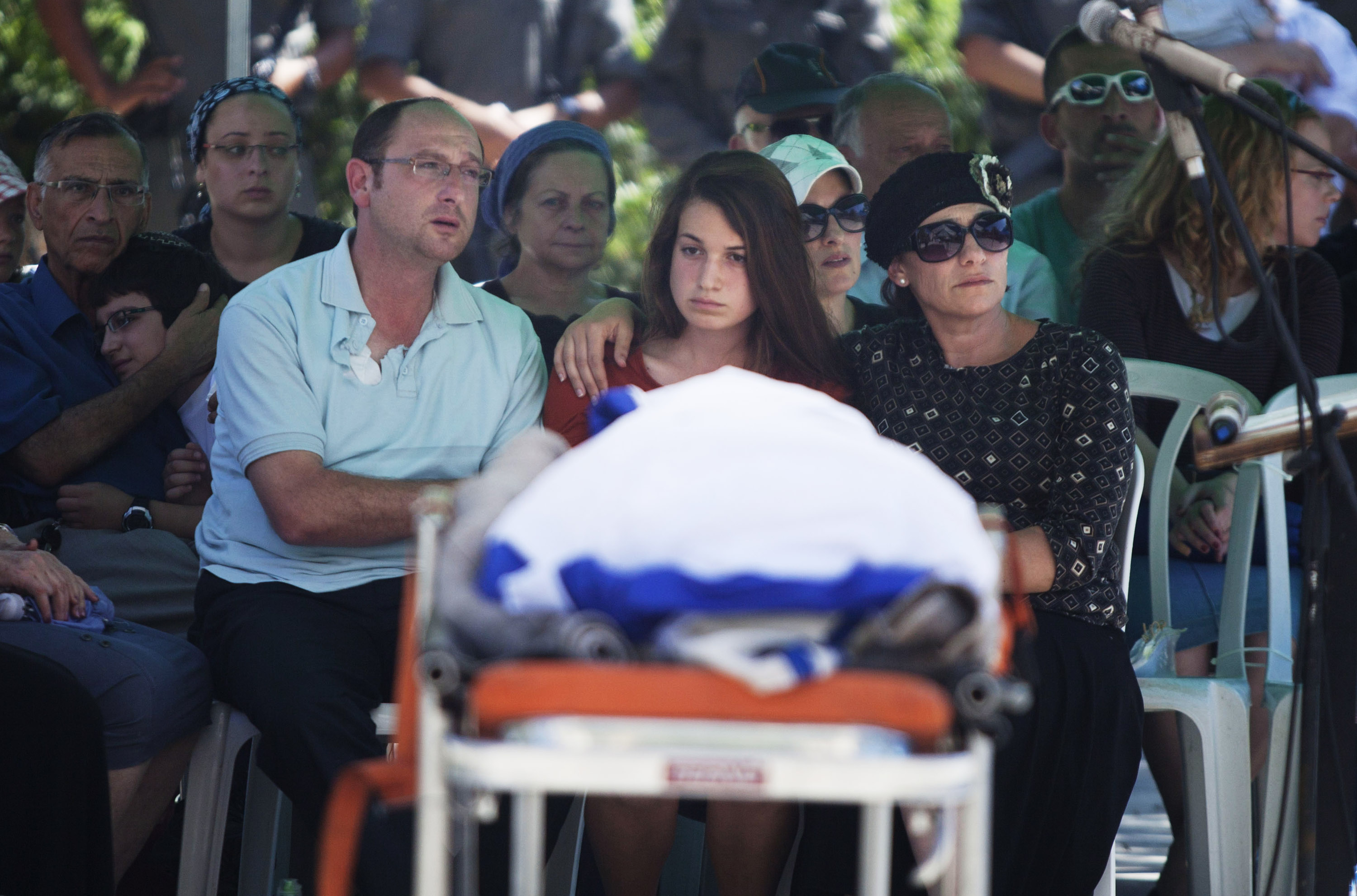 JERUSALEM -- Israeli media on Tuesday published a recording of an emergency call made to police by one of the three teenagers who was later found dead in the West Bank shortly after the abduction.

"They kidnapped me," a voice, believed to be Gilad Shaar, can be heard saying. Another male voice is then heard, shouting, "head down." Police confirmed the recording is authentic. Hotline workers initially dismissed the call as a hoax, delaying the rescue efforts for several hours, and several workers have been disciplined for the mishap.

The deaths of Shaar, 16, Eyal Yifrah, 19, and Naftali Fraenkel, a 16-year-old with dual Israeli-American citizenship, have prompted angry calls for revenge and Prime Minister Benjamin Netanyahu convened his security Cabinet for an emergency meeting to discuss a response to the killings, hours after airstrikes targeted dozens of suspected Hamas positions in the Gaza Strip.

Tens of thousands of mourners converged Tuesday in central Israel for a funeral service for three teens after a two week search and crackdown on the Hamas militant group, which Israeli leaders have accused of abducting and killing the young men.

Israeli troops also shot dead a Palestinian man in the West Bank, where the teens disappeared on June 12. Israel has accused the Hamas militant group of carrying out the abduction, and Netanyahu has warned "Hamas will pay."

The three young men were buried side by side in the central Israeli town of Modiin. Mourners arrived in large convoys of buses arranged for the ceremony. Netanyahu and President Shimon Peres were among the speakers to eulogize the youths, whose bodies were wrapped in blue and white Israeli flags and laid on stretchers. Hundreds of people also participated in separate memorial services in the hometowns of the three teens.

"Recently, the people of Israel went through a great trauma," said Shirel Shaar, Gilad's younger sister. "We are living as if we are in a movie, whose ending is as bad as can be," she said. "I don't have a brother anymore."

"We are burying a child today, a child who could have been the child of anyone of us," said Finance Minister Yair Lapid. "Therefore he is indeed the child of each and every one of us."

Israeli officials say the three were abducted while hitchhiking home from the Jewish seminaries where they were studying near the West Bank city of Hebron.

Hamas has praised the kidnappings but not confirmed or denied Israeli allegations that it was involved.

Their disappearances prompted the army to launch its largest ground operation in the West Bank in nearly a decade, dispatching thousands of troops to search for them and arresting nearly 400 Hamas operatives. The search came to a sad end on Monday afternoon when the bodies were found buried under a pile of rocks in a field north of Hebron.

The crackdown on Hamas in the West Bank has been accompanied by a spike in rocket fire out of the Hamas-controlled Gaza Strip. Overnight Tuesday, Palestinian militants fired eight rockets into Israel, the army said. The Israeli air force carried out airstrikes on 34 targets, including a Hamas compound, the military said. Palestinian officials said four people were wounded.

In the West Bank, Israeli troops shot and killed a 20-year-old Palestinian man during a raid in the northern town of Jenin. Israel said the man had thrown a grenade at the troops. But his family said he had been carrying eggs home for a predawn meal before the daylight fast for the Ramadan holiday.

Israeli authorities have released few details on the abduction, or the search for the teens. On Tuesday, Israeli media published a recording of an emergency call made to police by one of the teens shortly after the abduction.

"They kidnapped me," a voice, believed to be Shaar, can be heard saying. Another male voice is then heard, shouting, "head down." Police confirmed the recording is authentic. Hotline workers initially dismissed the call as a hoax, delaying the rescue efforts for several hours, and several workers have been disciplined for the mishap.

Israel has not yet decided how it will respond to the deaths of the youths. Netanyahu's Security Cabinet held a stormy, three-hour meeting late Monday but was unable to agree on a response. It was to meet again on Tuesday.

The Israeli daily Haaretz said that Defense Minister Moshe Yaalon had proposed building a new settlement in the West Bank in memory of the teens. Another Cabinet minister, Naftali Bennett, proposed a large-scale military operation in Gaza and to begin using the death penalty against Palestinian militants.

Israel is also reportedly considering the deportation of senior Hamas members from the West Bank to Gaza, where they would face tight travel restrictions and be separated from their families.

In Jerusalem, several hundred right-wing Israeli youths, many of them skullcap-wearing Orthodox Jews, marched through a main road, screaming for revenge. Police escorted the crowd, which briefly blocked Jerusalem's light rail service, as it made its way toward the city center.

The Security Cabinet was scheduled to meet later Tuesday after the funerals to continue its debate.

Thousands of Israelis have died in wars and militant attacks over the years, and Israel has grappled with the abduction of soldiers and civilians in the past. But the ages of the victims, and the fact that they were unarmed civilians, struck a raw nerve.

Israel has said two well-known Hamas operatives from Hebron are the primary suspects. The men, Marwan Qawasmeh and Amer Abu Aisheh, have not been seen since the teens went missing, and military officials said the search for them would continue.

Israeli soldiers blew up a door of Abu Aisheh's home in Hebron early Tuesday, said an Israeli military official, speaking on condition of anonymity due to protocol. AP photos show extensive damage to one side of the house.

Despite the public uproar, Netanyahu's options could be limited.

After a two-week crackdown on Hamas in the West Bank, few major targets remain there. Hamas had already been weakened by seven years of pressure by Israel and the forces of Western-backed Palestinian President Mahmoud Abbas.

Israel could turn its attention toward the Gaza Strip, where it has been battling a surge in rocket fire since the teens went missing.

Israel also might consider stronger political action. The crisis has escalated already heightened tensions between Israel and the new Palestinian government, which is headed by Abbas but backed by Hamas.

Hamas, an offshoot of the region-wide Muslim Brotherhood, is deeply rooted in Palestinian society. The movement's political goal is an Islamic state in all of historic Palestine, including the territory that now makes up Israel.

Netanyahu has called on Abbas to end his alliance with Hamas, saying he cannot be serious about peace while cooperating with a group sworn to Israel's destruction. Israel and its Western allies consider Hamas, which has killed hundreds of Israelis in suicide bombings and other attacks, a terrorist group.

Netanyahu's spokesman Mark Regev called on Abbas "to break his alliance with these killers."

"This atrocity, this murder of innocent teenagers on their way home from school, is a clear example. It demonstrates that Hamas has not changed. It remains a vicious, vile terrorist organization that targets every Israeli civilian man, woman and as we've seen, children as well," he said.