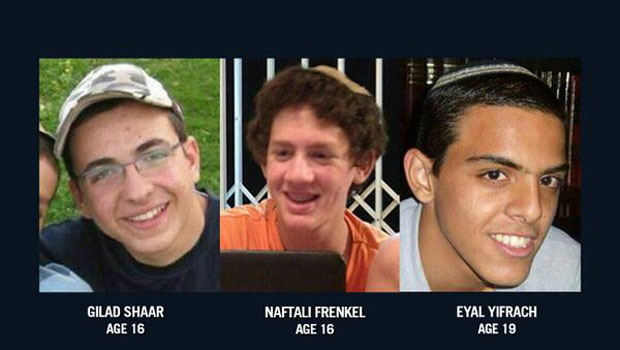 JERUSALEM -- The Israeli military found the bodies of three missing teenagers on Monday, just over two weeks after they were abducted in the West Bank, allegedly by Hamas militants. The grisly discovery culminated a feverish search that led to Israel's largest ground operation in the Palestinian territory in nearly a decade and raised fears of renewed fighting with Hamas.

Israeli Prime Minister Benjamin Netanyahu vowed tough action. "Hamas is responsible, and Hamas will pay," he said in a statement, adding the teenagers "were kidnapped and murdered in cold blood by human animals."

Israel said Tuesday it had carried out a series of airstrikes on targets in the Hamas-controlled Gaza Strip, but indicated those were in response to rocket attacks on Israel.

Eyal Yifrah, 19, Gilad Shaar, 16, and Naftali Fraenkel, a 16-year-old with dual Israeli-American citizenship, disappeared while hitchhiking home near the West Bank city of Hebron late at night on June 12 and were never heard from again. Despite the dangers, hitchhiking is common among Israelis traveling in and out of Jewish settlements in the West Bank. The teens had been studying at Jewish seminaries in the West Bank.

The military and the Shin Bet security agency announced late Monday that the bodies had been found. "The bodies are currently going through forensic identification. The families of the abducted teens have been notified," the army said. Lt. Col. Peter Lerner, a military spokesman, said the bodies were found "under a pile of rocks" near the village of Halhul, just north of Hebron.

Binyamin Proper, who was among the civilian volunteers that found the bodies, told Channel 2 TV that a member of the search party "saw something suspicious on the ground, plants that looked out of place, moved them and moved some rocks and then found the bodies. We realized it was them and we called the army."

U.N. Secretary-General Ban Ki-moon condemned the murders of three teens, calling them a "heinous act by enemies of peace."

Israel's U.N. Ambassador Ron Prosor told CBS News' Pamela Falk that the "people of Israel cannot - and will not - tolerate these acts of terrorism."

"Israel's leaders have been very clear: we are prepared to take all necessary measures to protect our citizens from Hamas terror," Prosor said. "Those who target Israelis with terrorism today will pay a very heavy price tomorrow."

Israel accused Hamas of being behind the abductions and launched a frantic manhunt throughout the West Bank, arresting nearly 400 Hamas operatives in the process. Last week, Israel identified two well-known Hamas operatives as the chief suspects.

"The two main terrorists involved are Marwan Kawasma and Amer Abu Aysha, two Hamas operatives from Hebron who became suspects immediately following the kidnapping," the IDF said in a statement.

The two men remained on the run late Monday.

The search for the teens captured the nation's attention. The Israeli media delivered round-the-clock updates on the search, and the mothers of the three teens became high-profile figures as they campaigned for their sons' return. Israelis held daily prayer vigils, including mass gatherings attended by tens of thousands of people at the Western Wall, the holiest prayer site in Judaism, and in a downtown square in Tel Aviv.

News of their deaths prompted a spontaneous outpouring of grief among Israelis. Friends and neighbors rushed to the homes of the families in the Israeli towns of Nof Ayalon and Elad, and the West Bank settlement Talmon, while supporters lit memorial candles. "All of Israel bows its head today," said President Shimon Peres.

Netanyahu was huddling with his Security Cabinet, a group of senior government ministers, late Monday debating a response.

"Murderers of children and those who direct them cannot be forgiven. Now is a time for actions, not words," Naftali Bennett, a member of the group, wrote on his Facebook page ahead of the meeting.

Early Tuesday, Israel carried out an especially intense series of airstrikes in the Gaza Strip, saying it had struck 34 targets across the Hamas-controlled territory. The military said the airstrikes were a response to a barrage of 18 rockets fired into Israel since late Sunday.

"The IDF will continue to act in order to restore the peaceful living to the civilians of the state of Israel. The Hamas terror organization and its extensions are solely responsible for any terror activities emanating from the Gaza Strip," said Lt. Col. Peter Lerner, a military spokesman.

There were no further details on the targets, but in recent weeks Israel has repeatedly targeted launch sites and weapons storage areas in similar attacks. There were no immediate reports of casualties.

Israel has not publicly provided any evidence proving Hamas involvement, and it is not clear whether the kidnappers received orders from higher-ups or acted on their own. The group praised the kidnappings, but never claimed responsibility.

"Netanyahu should know that threats don't scare Hamas, and if he wages a war on Gaza, the gates of hell will open on him," he said.

Netanyahu's spokesman, Mark Regev, said Israel would step up its calls for Palestinian President Mahmoud Abbas to dissolve the unity government he recently formed with the backing of Hamas.

Abbas has condemned the kidnappings, and his forces coordinated closely with Israel during the search for the teens. But he has so far refused Israeli calls to end the unity government, which ended a seven-year rift with Hamas. The Palestinian president called an urgent meeting of the Palestinian leadership to discuss the events, his spokesman Nabil Abu Rdeneh said.

Abbas says his new Cabinet is committed to his political program seeking peace with Israel. Hamas is not part of his government, but has lent its backing from the outside.

The unity deal ostensibly ended seven years of Hamas rule in Gaza. But the militant group remains in firm control of the seaside territory.

Jewish leaders across the world condemned the deaths of the young men. Ron Lauder, president of the World Jewish Congress, said the killings "must spur the world into action" against Hamas.

The U.S.-based Simon Wiesenthal Center called on President Barack Obama to pressure Abbas to break up his alliance with Hamas. "President Obama must tell the Palestinian people that peace and Hamas are mutually exclusive," the group said in a statement.