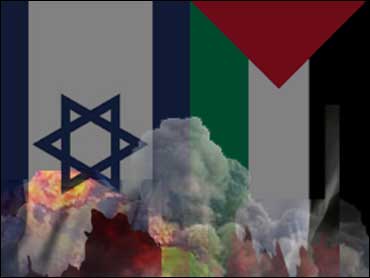 Israel moved closer to invading Gaza, saying Thursday it had wrapped up preparations for a broad offensive after Palestinian militants fired about 100 rockets and mortar shells across the border in two days.

Israel's foreign minister brushed off a call for restraint from Egypt's president, and Israeli Prime Minister Ehud Barak made a direct appeal to Gaza's people to pressure their leaders to stop the barrages. But the attacks showed no signs of ending. By nightfall, three rockets and 15 mortar shells had exploded in Israel.

Olmert issued his appeal in a rare interview with the Arabic language satellite channel al-Arabiya, saying Israel would not hesitate to respond with force if the attacks continued.

Thursday's rocket fire was far less than the barrage of 80 rockets the previous day, and there were no reports of injuries. But Israeli leaders said the continued fire - the most intense since Egypt brokered a cease-fire last June - was unacceptable.

One of the mortar shells landed at Israel's passenger crossing with Gaza just as a group of Palestinian Christians was going through on their way to the West Bank town of Bethlehem for Christmas celebrations, the military said. Another rocket exploded after nightfall in an industrial park south of the coastal city of Ashkelon, police said.

Egyptian President Hosni Mubarak invited Israeli Foreign Minister Tzipi Livni to Cairo to discuss the possibility of renewing the truce, which expired Friday. But by the time Livni arrived, she was in no mood to discuss a cease-fire, and she dismissed Mubarak's pleas for restraint.

"Enough is enough," she said afterward. "When there's shooting, there's a response. Any state would react that way."

In Israel, Defense Minister Ehud Barak warned that "whoever harms the citizens and soldiers of Israel will pay a heavy price."

He did not elaborate. But defense officials, speaking on condition on anonymity because they were discussing classified information, said the Israeli operation would likely begin with surgical airstrikes against rocket launchers and continue with a land invasion. Harsh weather conditions are hampering visibility and complicating air force missions, so the operation won't be launched until the skies clear, they added.

Another complication is national elections set for Feb. 10. Both Barak and Livni are running for prime minister, and they are under heavy pressure from opposition leader Benjamin Netanyahu to act. Netanyahu, who advocates tough action against Palestinian militants, is the front-runner in the election, according to opinion polls.

Despite the tough talk, Israel has been reluctant to embark on an offensive liable to exact heavy casualties on both sides. Gaza's militants operate in crowded civilian areas, and past invasions have not halted the barrages.

The barrages have caused no casualties over the past two days, but there has been property damage, and tens of thousands of Israelis near Gaza have been instructed to stay indoors. TV newscasts have been showing panic-stricken children.

Israel left Gaza in 2005 after a 38-year occupation, but still controls its border crossings, blockaded for months in an effort to pressure militants to halt their fire. Islamic Hamas militants seized control of Gaza in June 2007, after routing security forces loyal to Western-backed Palestinian President Mahmoud Abbas.

Despite the rocket fire, Israel's Defense Ministry said late Thursday that it would open two cargo crossings Friday to allow a limited amount of vital supplies to enter. Israel's policy is to avoid a humanitarian crisis there, while keeping up the pressure.

In the West Bank, Abbas visited Hebron, the area's largest city, for the first time since he took office in 2005. Israeli forces control a section in the middle of the city to protect about 500 Jewish settlers living in several enclaves. Hebron is home to about 170,000 Palestinians.

Abbas demanded that the settlers get out. "Hebron is ours, and they have to leave if they want peace," he said.

Also Thursday, an Israeli military court sentenced the leader of a Palestinian group to 30 years in prison for participating in anti-Israel attacks.

Ahmed Saadat is the leader of the Popular Front for the Liberation of Palestine. The PFLP took responsibility for killing Israeli Cabinet minister Rehavam Zeevi at a Jerusalem hotel in 2001. Saadat was acquitted of planning the assassination, but sentenced for other attacks, the military said.

In neighboring Lebanon, meanwhile, Lebanese army officers said troops discovered seven rockets set up with timers that were on the verge of firing near the border with Israel. They said troops were dismantling the Katyusha rockets.

They would not say if the rockets were directed toward Israel. They spoke to The Associated Press on condition of anonymity because of military rules.

The militant group Hezbollah has a large rocket arsenal, but has rarely used them against Israel since their 2006 war. Last year, a previously unknown militant Islamic group fired two rockets into Israel.