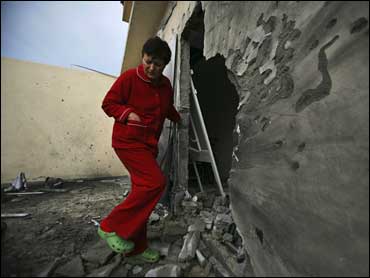 Israel's top security official warned Sunday that Gaza militants can hit more Israeli cities with longer-range rockets, on a day when rockets exploded in border towns and a coastal city after an Israel-Hamas truce expired.

Only one Israeli was lightly wounded in the barrage of 19 rockets and three mortars by nightfall. But after a weekend of heavy rocket attacks, Israel's government threatened to strike back hard.

One rocket exploded in Ashkelon, a city of 120,000 on the Mediterranean coast. In the past, Israel has responded harshly to attacks on Ashkelon.

Yuval Diskin, the head of the Shin Bet security service, warned Israel's Cabinet that Hamas now has rockets that can reach the larger city of Ashdod farther north up the Mediterranean coast and even the outskirts of Beersheba, 30 miles to the east. Such attacks would increase the likelihood of an Israeli invasion of Gaza.

"The scenarios are clear, the plans are clear, the determination is clear, and so are the ramifications of each of the steps, Israeli Prime Minister Ehud Olmert said at his Cabinet's weekly meeting. "A responsible government is not happy to go to war, but does not evade it."

The government has been under heavy pressure to react to the rocket fire, but the military has so far been wary of doing so for fear of casualties. In the past, large operations have not succeeded in stopping the rockets.

Israel carried out two airstrikes Sunday aimed at rocket launchers in Gaza, the military and Palestinian officials said. No one was hurt. Militants typically prepare rockets for launch and then fire them from cover a safe distance away.

At Sunday's meeting, several Cabinet ministers suggested retaliation, including some who advocated a large-scale invasion to topple the Hamas regime in Gaza.

Foreign Minister Tzipi Livni said, if elected prime minister Feb. 10, she would do so.

"The Hamas government in Gaza must be toppled, the means to do this must be military, economic and diplomatic," she said. "Whenever they shoot at Israel, Israel must respond."

"We cannot accept the current situation," said Defense Minister Ehud Barak, according to a participant in the meeting. "In order to return to a calm like six months ago, we will probably need a wide-scale operation."

The participant spoke on condition of anonymity according to government guidelines.

Israeli officials said diplomats have begun garnering international support for an offensive in Gaza. The officials, speaking on condition of anonymity because the talks are not public, said the goal was to avert hostile declarations and U.N. resolutions if Israel invades Gaza.

A truce between Israel and Gaza's Hamas rulers expired on Friday after six months. The truce had frayed since early November, and rocket fire at Israeli towns has been increasing steadily in recent days.

Hamas spokesman Ismail Radwan blamed Israel for the collapse of the truce and said Palestinian factions would "respond to any aggression against our people."

On Sunday, one rocket scored a direct hit on a house in the town of Sderot, scattering rubble and furniture inside. "Everyone is traumatized," the house's owner, Maya Aviar, told AP Television News.

No one was injured in that attack, but the Israeli military said a worker at a farming community near Gaza was lightly wounded in a separate rocket hit. Another rocket exploded in an industrial zone in Ashkelon, a city of about 120,000 people 10 miles north of Gaza.

The Palestinian Islamic Jihad took responsibility for Sunday's rocket fire. Abu Ahmad, a spokesman for the group, said Israeli citizen would "not sleep peacefully as long as Gaza children are not enjoying water, electricity, medicine and peace."

Israel has largely kept the crossings into Gaza closed in response to the rocket fire, a move that has caused shortages of fuel and basic goods in the territory of 1.4 million Palestinians.