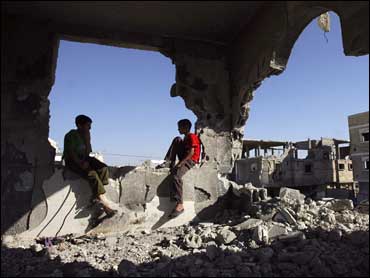 Guns went quiet as a six-month truce between Israel and Gaza Strip militants took effect early Thursday, marred only by widespread skepticism about its ability to hold.

The cease-fire, which Egypt labored for months to conclude, also obliges Israel to ease a punishing blockade that has driven ordinary Gazans even deeper into destitution and confined them to their tiny seaside territory.

A day of intense Palestinian rocket and mortar fire and Israeli air reprisals on Wednesday underscored just how fragile the agreement would be. Shortly before the truce took hold, a Hamas militant was killed in an Israeli air strike in central Gaza that the military said targeted a rocket squad.

Hamas, the Islamic militant group that has ruled Gaza for the past year, reported that the Israeli navy fired four shells into the waters off Gaza City minutes after the truce began. But the shells fell about 500 yards from shore and there were no apparent targets in the area, witnesses reported, suggesting the shells might have been fired as part of a military drill. The military had no immediate comment.

More than two hours into the truce, there were no other reports of fire. In Gaza and in Israel, the cease-fire dominated radio talk shows Thursday morning.

But, reports CBS News correspondent Robert Berger, both sides doubt the truce can hold. "Hamas refuses to recognize the Jewish state and is committed to armed resistance, so Israel fears the group will dig in for the next round of violence," says Berger.

Israeli government spokesman Mark Regev put a fine point on the mistrust. "If we see Hamas using this period of quiet just to rearm and regroup, all bets are off. There will not be an understanding."

Berger reports the cautionary rhetoric was no more optimistic from the Palestinian side. "We are going to do everything we can to support it, in spite of all the doubt we have that Israel will commit itself to the cease-fire," said Jamal Nazzal, a spokesman for the Fatah government in the West Bank.

Although each side has expressed skepticism over the other's commitment to the accord, the hope is that it will avert an Israeli military invasion of the coastal strip meant to quell rocket and mortar squads.

"Expectations are low with regard to the completion of the Middle East roadmap" before the end of Mr. Bush's tenure, said Falk. "But there is some hope that the Egypt-brokered cease-fire and the Turkey-brokered talks between Israel and Syria can help avert a major conflict in the region this summer."

Tal Mahatzili of the southern Israeli farming community of Nir Oz said she was afraid the tranquility Thursday morning was "the quiet before the storm."

"If I could believe our neighbors had stopped their hostile activities, washed their hands at 6:05 and went to the local library to draft a peace proposal, then I would say, "Wow,' and heave a sigh of relief," she told Israel Radio. "To my great regret, I'm afraid the malevolent activities across the border won't stop."

Eman Mahmoud, a 22-year-old Gaza university student, dreamt of a return to normalcy.

"I want to be able to sleep without the sound of shelling or warplanes. This is the most important thing to me," she said. "We have been living a nightmare. ... I am not sure how long it is going to last, but my dream is that this calm will continue."

In an email to reporters, Hamas' military wing declared itself "completely and comprehensively" committed to the truce. But it warned that the cease-fire was not a "free gift to the occupiers" and that Hamas gunmen were ready to "launch a military strike that will shake the Zionist entity state" if Israel did not abide by all its cease-fire commitments.

Israeli government spokesman Mark Regev said Israel would "fully implement all its commitments" under the agreement, but added, "Our eyes are open, we are closely following what the other side is doing."

In the first stage of the Gaza deal, which took effect at 6 a.m. Thursday (2200 Wednesday, Eastern), militants are to halt their attacks on Israel, and Israel is to cease its raids.

If the quiet holds, Israel will ease its blockade of Gaza on Sunday to allow the shipment of some supplies to resume. A week later Israel is to further ease restrictions at cargo crossings, which in recent months have been closed to all but humanitarian aid and restricted fuel supplies.

In a final stage, negotiators are to tackle Hamas' demand to reopen a major border passage between Gaza and Egypt and Israel's insistence that Hamas release an Israeli soldier it has held for two years.

"We in Hamas are committed to this calm and are interested in making it succeed," Hamas spokesman Sami Abu Zuhri said shortly before the truce went into effect. "The ball is now in Israel's court."

"I believe there will be quiet in (Israel's) south," he said in a speech Wednesday to philanthropists. But, quickly downplaying expectations, he instructed his military "to prepare for any operation, short or long, that might be necessary" should the truce break down.

A cease-fire in November 2006 lasted only weeks before unraveling.

Egypt acted as middleman for the current deal because Israel, like much of the international community, shuns Hamas for refusing to recognize Israel or renounce violence.

The immediate halt of hostilities is likely to prove to be the easy part of the deal. Israel's point man on the truce talks, Defense Ministry official Amos Gilad, said late Wednesday that Gaza's main gateway to the outside world, the Rafah crossing with Egypt, would not reopen unless Israeli Cpl. Gilad Schalit were released. But Hamas' military wing said Thursday that Schalit "would not see the light" unless hundreds of Palestinian prisoners were freed.

Israel has balked at releasing some of the militants Hamas wants released because they were involved in fatal attacks on Israelis.

Rafah was snapped shut after Hamas violently wrested control of Gaza a year ago from security forces loyal to moderate Palestinian President Mahmoud Abbas, who now rules only in the West Bank. Although Rafah lies on the Gaza-Egypt border, Israel has had the power to idle it because Europeans monitoring the passage require Israeli security clearance to operate. That clearance has not been given since the Hamas takeover.

The Hamas Interior Ministry sent an email to reporters Thursday saying 260 Palestinians who had been stranded in Egypt after seeking medical treatment there had crossed back into Gaza through Rafah overnight. It said 5,517 Gazans, including students and Palestinians with residency abroad, have applied to leave if Rafah is opened. "We expect very good news in the next few days," the ministry said - hinting at a temporary opening to allow those people to leave.