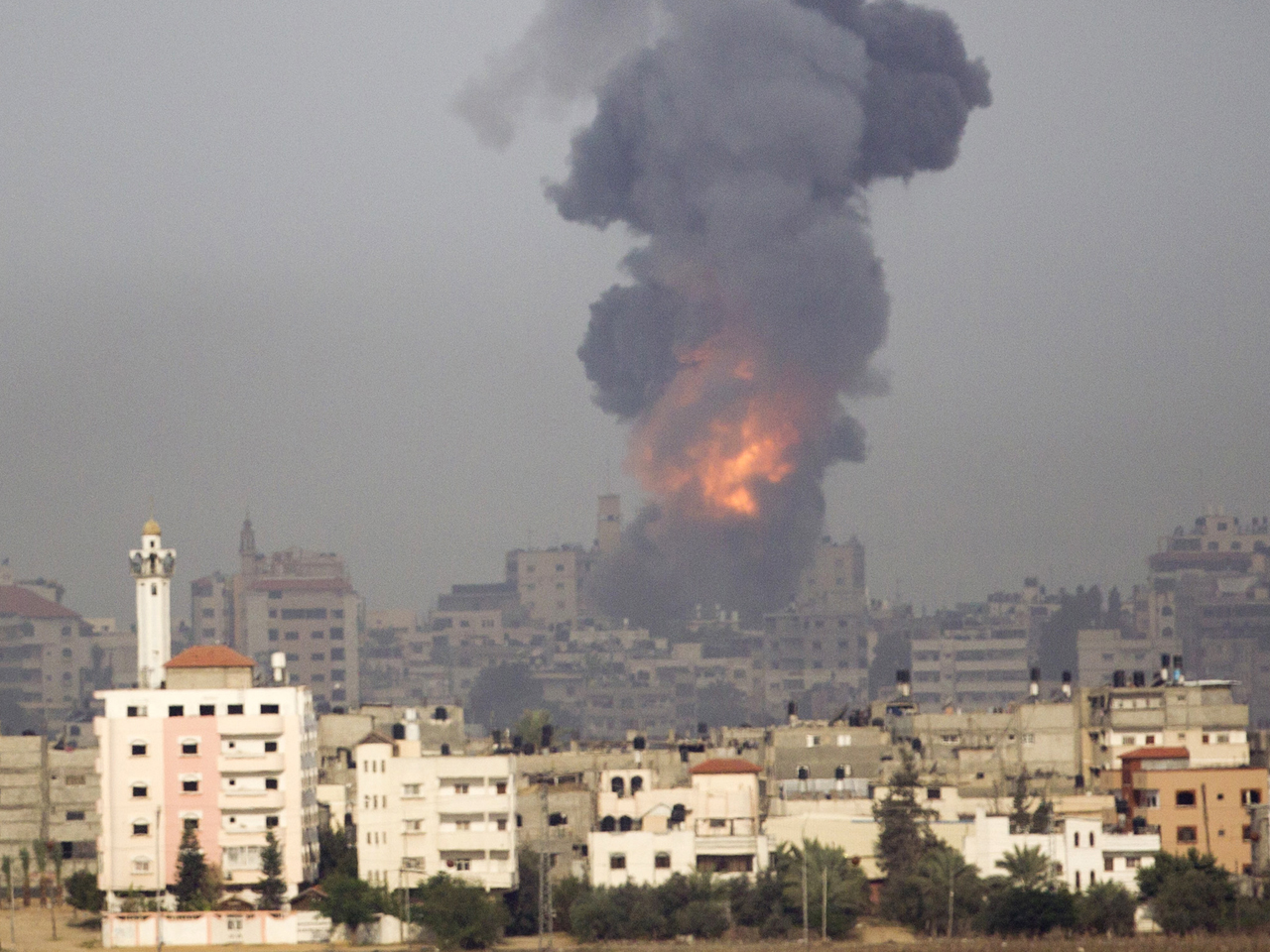 Footage from Associated Press Television News shows a plume of smoke emanating from an Iron Dome battery deployed in Tel Aviv followed by a flash of light overhead as the rocket is intercepted. People huddled along Tel Aviv's beachfront boardwalk cheered Saturday as the interception took place.

Israel says its Iron Dome system has intercepted nearly 250 rockets since a round of fighting broke out on Wednesday.

Correspondent Allen Pizzey reports that, despite vague talk of a cease-fire, Hamas managed to hit a southern Israeli city with four rockets, and retaliation continued unabated.

A massive explosion rocked the Gaza City soccer stadium this morning and speculation was that the target was a rocket launching site. The Israeli bombing campaign expanded into other areas and included the government infrastructure. The cabinet headquarters was flattened.

There were reports of civilians among the casualties. At least half of the Palestinians killed in the conflict so far have been civilians, including at least eight children and a pregnant woman.

The new attacks, which Gaza officials say left 10 dead, followed an unprecedented rocket strike aimed at the contested holy city of Jerusalem that raised the stakes in Israel's violent confrontation with Palestinian militants and extended the battlefield.

President Obama spoke with Israeli leaders on Friday night reiterating Israel has a right to defend itself. He also spoke to Egyptian leaders who are trying to diffuse the conflict.

Israeli troops and armor amass along the border with Gaza. Roads have been sealed off and Israeli cabinet has approved to call-up as many as 75,000 reservists setting the stage for a possible ground invasion.

Today the Israeli military deployed a battery of its so-called Iron Dome anti-missile system in Tel Aviv, Pizzey reports. Four are already operational in the south. The idea is they detect and intercept missiles in the air. Such is their success rate that three more have been rushed into production.

Militants, undaunted by the heavy damage the Israeli attacks have inflicted, have unleashed some 500 rockets against the Jewish state, including new, longer-range weapons turned for the first time this week against Jerusalem and the Tel Aviv heartland. Following those attacks, the military deployed an Iron Dome rocket defense battery in central Israel on Saturday. The system, devised precisely to deflect the Gaza rocket threat, was deployed two months earlier than planned, the Defense Ministry said.

Ten people, including eight militants, were killed and dozens were wounded in the various attacks early Saturday, Gaza health official Ashraf al-Kidra said. In all, 40 Palestinians including 13 civilians and three Israeli civilians have been killed since the Israeli operation began.

The violence has widened the instability gripping the Mideast. At the same time, revolts against entrenched regional regimes have opened up new possibilities for Hamas. Islamists across the Mideast have been strengthened, bringing newfound recognition to Hamas, shunned by the international community because of its refusal to recognize Israel and renounce violence.

A high-level Tunisian delegation, led by Foreign Minister Rafik Abdessalem, drove that point home with a visit to Gaza on Saturday. The foreign minister's first stop was the still-smoldering ruins of the three-story office building of Gaza's prime minister, Ismail Haniyeh of Hamas.

"Israel has to understand that there is an international law and it has to respect the international law to stop the aggression against the Palestinian people," Abdessalem told The Associated Press during a tour of Gaza's main hospital, Shifa, later Saturday. He said his country was doing whatever it can to promote a cease-fire, but did not elaborate.

It was the first official Tunisian visit since Hamas's violent 2007 takeover of the territory. Egypt's prime minister visited Friday and a Moroccan delegation is due on Sunday, following a landmark visit by Qatar's leader last month that implied political recognition.

President Obama spoke with Israeli leaders on Friday night reiterating Israel has a right to defend itself. He also spoke to Egyptian leaders who are trying to diffuse the conflict.

The Israelis insist everything is Hamas' fault. "We are only interested in one thing - not in capturing territory, not in military victory on the battlefield. We want to bring peace and quiet," said Israeli government spokesman Mark Regev.

Israel had been incrementally expanding its operation beyond military targets but before dawn on Saturday it ramped that up dramatically, hitting Hamas symbols of power. Israeli defense officials, speaking on condition of anonymity to discuss confidential decisions, said military chief Lt. Gen. Benny Gantz personally ordered the scope of the airstrikes to be increased.

Haniyeh's three-story office building was flattened by an airstrike that blew out windows in neighboring homes. He was not inside the building at the time.

"Hamas responded to the Zionist aggression and hit them in the depth of their land," he said, referring to rockets aimed Friday at Jerusalem and Tel Aviv.

Another airstrike brought down the three-story home of a Hamas commander in the Jebaliya refugee camp near Gaza City, critically wounding him and injuring other residents of the building, medics said.

Missiles smashed into two small security facilities and the massive Hamas police headquarters in Gaza City, setting off a huge blaze that engulfed nearby houses and civilian cars parked outside, the Interior Ministry reported. No one was inside the buildings.

The Interior Ministry said a government compound was also hit while devout Muslims streamed to the area for early morning prayers, although it did not report any casualties from that attack.

Air attacks knocked out five electricity transformers, cutting off power to more than 400,000 people in southern Gaza, according to the Gaza electricity distribution company. People switched on backup generators for limited electrical supplies.

In southern Gaza, aircraft went after underground tunnels militants use to smuggle in weapons and other contraband from Egypt, residents reported. A huge explosion in the area sent buildings shuddering in the Egyptian city of El-Arish, 30 miles away, an Associated Press correspondent there reported.

The Israeli military said more than 800 targets have been struck since the operation began.

The widened scope of targets brings the scale of fighting closer to that of the war the two groups waged four years ago. Hamas was badly bruised during that conflict, but has since restocked its arsenal with more and better weapons, and has been under pressure from smaller, more militant groups to prove its commitment to fighting Israel.

The attack aimed at Jerusalem on Friday and two strikes on metropolitan Tel Aviv showcased the militants' new capabilities, including a locally made rocket that appears to have taken Israeli defense officials by surprise. Both areas had remained outside the gunmen's reach before.

Just a few years ago, Palestinian rockets were limited to crude devices manufactured in Gaza. But in recent years, Israeli officials say, Hamas and other armed groups have smuggled in sophisticated, longer-range rockets from Iran and Libya.

Israeli Prime Minister Benjamin Netanyahu met in emergency session with Cabinet ministers Friday and they approved mobilizing up to 75,000 reservists, more than doubling the number authorized earlier this week. That would be the largest call-up in a decade. At a parking lot in central Israel, uniformed reservists waited to board buses. One prayed, covered in a Jewish prayer shawl.