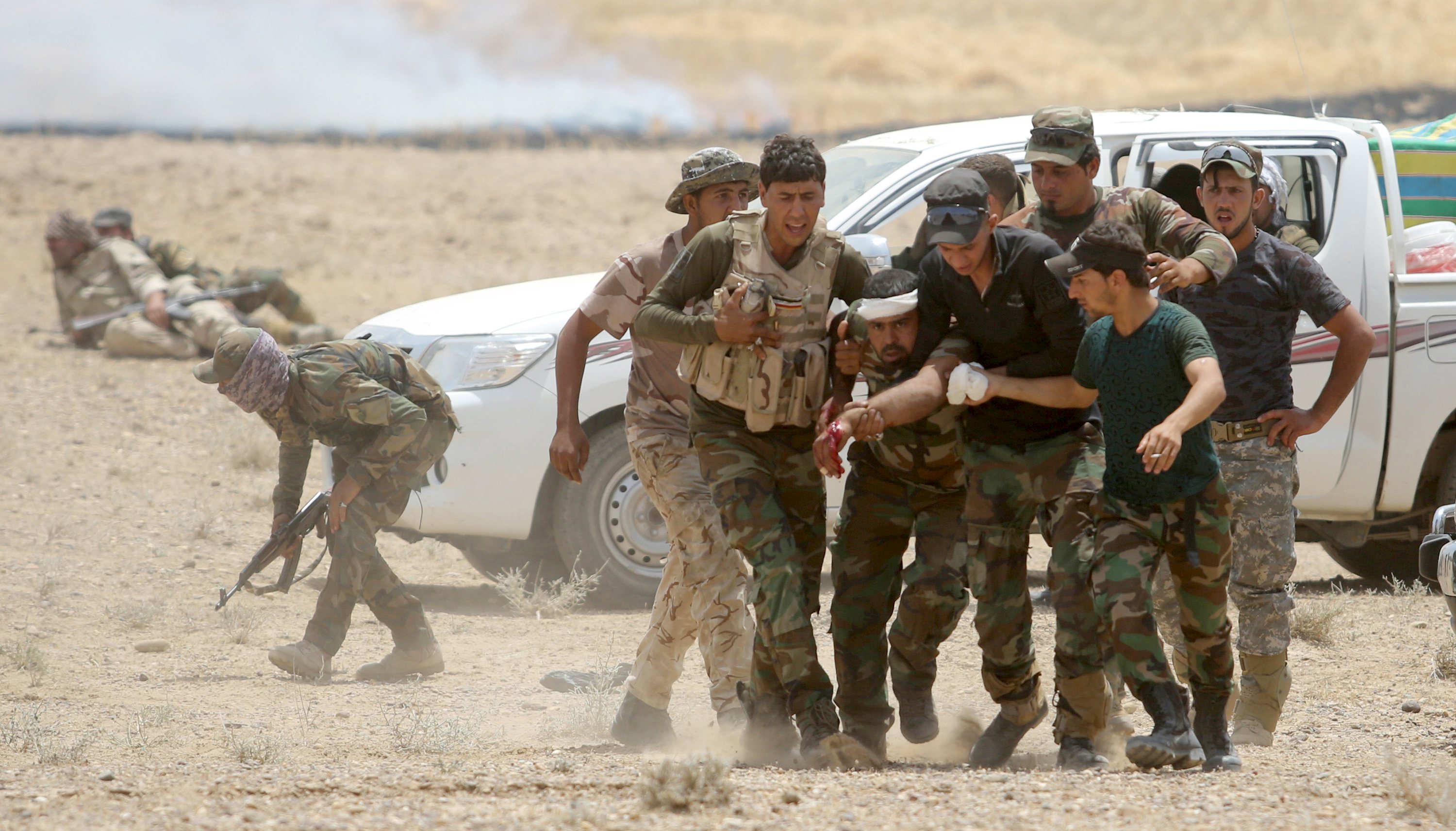 The attack on a police station in the Tharthar area north of the ISIS-held provincial capital, Ramadi, caused a large secondary explosion in an ammunition depot, the officials said. Another 63 security forces members were wounded in the attack.

Hospital officials confirmed the casualties. All officials spoke on condition of anonymity because they are not authorized to brief the media.

The loss of Ramadi prompted Iraqi Prime Minister Haider al-Abadi to order Shiite militiamen into the vast Sunni province, which was an insurgent hotbed during the eight-year U.S. military presence.

Ramadi is still in ISIS hands, CBS News correspondent David Martin reports. There has been no real counter offensive as of yet. Iraqis have cleared a road around to the west of Ramadi so they are now marshalling forces both to the east and west of the city.

The Shiite militiamen have played a key role in pushing the Sunni ISIS group back elsewhere in Iraq, but have also been accused by rights groups of carrying out revenge attacks against Sunni citizens, charges denied by militia commanders.

ISIS and other Sunni extremists view Shiites as apostates deserving of death.

Meanwhile, The United Nations mission to Iraq said Monday that more than 1,031 people were killed and another 1,648 were wounded in violence across the country last month.

The U.N. figures showed that 665 civilians and 366 members of the Iraqi security forces were killed in May. Baghdad was the worst affected province with 343 killed and 701 wounded. But, the UNAMI statement excluded deaths from ongoing fighting in Anbar, due to problems in verifying the "status of those killed." The figures also leave out insurgent deaths.

In announcing the latest casualty figures, the U.N. mission said that military action alone is not enough to defeat ISIS and called for a power-sharing among Iraq's ethnic and sectarian groups.

""For any military gains to be sustainable, the government of Iraq must adopt a set of confidence-building measures toward disaffected communities, enabling them to assume a share in governing their matters," said Jan Kubis, the United Nations Secretary-General's Special Representative for Iraq.

Also, Lise Grande, the U.N. humanitarian coordinator for Iraq, said the United Nations is launching an appeal for 500 million dollars to support critical humanitarian assistance in Iraq. The appeal will be launched next Tuesday in Brussels at the European Parliament.

"We are doing this because the humanitarian operation, which is currently reaching millions of people desperately in need, has run out of money. If we don't get money in now, if we don't secure financing, programs all across the country are going to be closing in the next weeks and months," said Grande during an interview with The Associated Press.

Internal fighting has displaced more than 2.7 million people inside Iraq, including 110,000 who fled from renewed fighting in and around Ramadi in the past two weeks.

Many of these are living with other families, inside mosques or in makeshift camps around the western periphery of Baghdad. Meanwhile, there are hundreds of thousands more displaced Iraqis in the northern Kurdish regions.