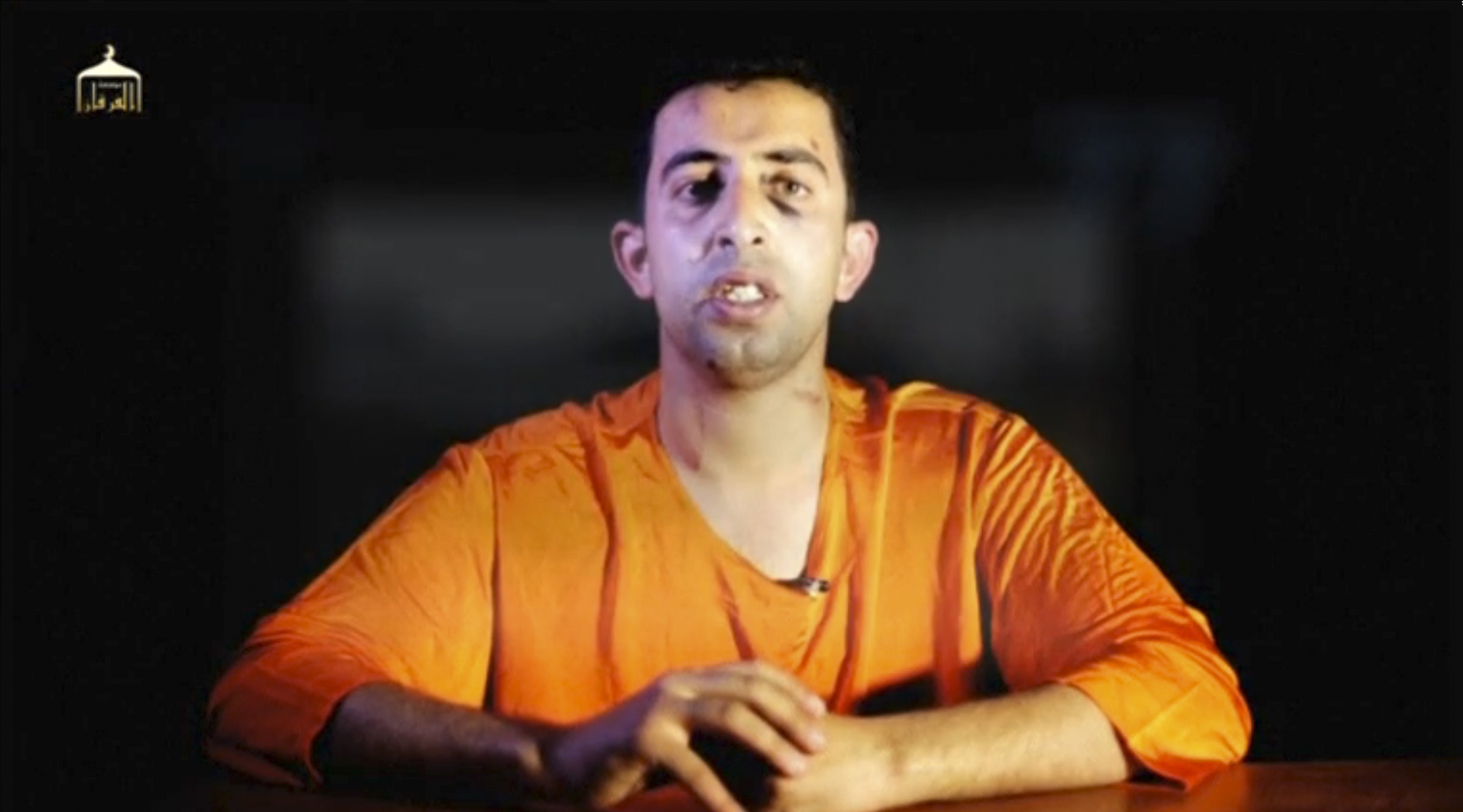 AMMAN, Jordan -- A video released online Tuesday purportedly showed a Jordanian pilot captured by the Islamic State of Iraq and Syria (ISIS) in Syria being burned to death by his captors following a weeklong drama over a possible prisoner exchange.

CBS News was not immediately able to confirm the authenticity of the video but the Jordanian government confirmed on Tuesday that the pilot had been killed.

Jordan threatened a harsh response to the killing of Lt. Muath Al-Kaseasbeh, 26, who fell into the hands of the militants in December when his F-16 crashed near Raqqa, Syria, the de facto capital of the group's self-styled caliphate. He was the only pilot from the U.S.-led coalition to have been captured to date.

The 20-minute-long video was released on militant websites, bore the logo of the extremist group's al-Furqan media service, and featured the slick production and graphics used in previous Islamic State videos.

The video included purported images of the pilot showing signs of having been beaten, including a black eye. At the end of the video he is purportedly shown wearing an orange jumpsuit. He stands in an outdoor cage as a masked militant lights a line of fuel leading to it.

The video threatened other purported Jordanian pilots by name.

King Abdullah II of Jordan, who is in Washington, spoke on Jordan TV, urging all Jordanians to unite. Confirming the pilot's death, the king said "it's the duty of all of us to stand united and show the real values of Jordanians in the face of these hardships."

However, in the pilot's home village of Ai, violent protests erupted and a local government office was set on fire. Witnesses said the situation was tense and riot police were patrolling the streets.

At a tribal meeting place where the pilot's relatives have waited for weeks for word on his fate, family members wept when receiving word of the pilot's death. Outside, hundreds of people later took to the streets, chanting: "There is no god but God and the martyr is beloved by God."

The video appeared aimed at pressuring Jordan to leave the coalition that has been battling to roll back ISIS. Jordan's king, a close Western ally, has portrayed the campaign against the extremists as a battle over values, but the airstrikes against fellow Muslims are not popular in Jordan.

Jordanian government officials have said they country's continued participation in the coalition is assured, despite the hostage crisis. Officials said the killing of the pilot would only toughen Jordan's stance.

"The Jordanian response to the assassination of the hero pilot, Muath al-Kaseasbeh, will be strong, decisive and swift," government spokesman Mohammed al-Momani said in a statement carried by the official news agency Petra.

The army spokesman, Mamdouh al-Ameri, said that "our punishment and revenge will be as huge as the loss of the Jordanians."

The fate of the two captives had been linked but a video of Goto's purported slaying released Saturday made no mention of the pilot.

In response to demands by militants, Jordan's government had said in recent days it was willing to trade Sajida al-Rishawi, an al-Qaeda prisoner, for the pilot, but that it wanted proof of life first. Al-Rishawi faces death by hanging in Jordan for her role in triple 2005 hotel bombings that killed 60 people.

One Jordanian official said al-Rishawi , who has been held since 2006, will be executed Wednesday.

An audio message last week, purportedly from ISIS, said the pilot would be killed if al-Rishawi was not released Thursday, without actually proposing a swap.

U.S. President Barack Obama said if the video is found to be authentic it would be "just one more indication of the viciousness and barbarity of this organization."

"It will redouble the vigilance and determination on the part of the global coalition to make sure that they are degraded and ultimately defeated," he told reporters during an event at the White House.

Obama later issued a statement offering condolences, saying the pilot's "dedication, courage, and service to his country and family represent universal human values that stand in opposition to the cowardice and depravity (of ISIS)."

"The Secretary-General urges all governments to strengthen their efforts to combat the scourge of terrorism and extremism within the bounds of their human rights obligations," a spokesman said.

ISIS, which controls around a third of Syria and neighboring Iraq, has released a series of grisly videos showing the killing of captives, including two American journalists, an American aid worker and two British aid workers. Other videos and images show the killing of scores of captured Syrian and Iraqi soldiers. Tuesday's was the first to show a captive being burned alive.

David L. Phillips, a former State Department adviser on the Middle East, said he believes the brutal killing of the pilot could backfire, antagonizing Sunni Muslims against ISIS, including Sunni tribes in Iraq.

"They need to have a welcome from Sunni Arabs in Anbar Province (in Iraq) to maintain their operations," said Phillips, director of the Program on Peace-building and Human Rights at Columbia University.

He said the extremist group's recent military setbacks may have fueled the killings. "They need to compensate for that with increasingly gruesome killings of prisoners," he said.

In Washington, Abdullah met privately with members of the Senate Foreign Relations Committee. The panel's chairman, Sen. Bob Corker, R-Tenn., offered condolences to the king at the start of the meeting.

Jordan has made clear that the hostage crisis will not prompt it to leave the U.S.-led military coalition against ISIS.

Experts are divided over whether Jordan faces a greater threat from extremists outside its borders or from those within. In recent months, there have been signs of greater support for ISIS' ideas among Jordan's young and poor. Last year, the government intensified a crackdown on IS sympathizers and the al Qaeda branch in Syria.

Currently, about 220 Jordanians are in prison because of alleged ties to such groups, including 30 who are serving terms from three to five years, said Marwan Shehadeh, an expert on militant groups.