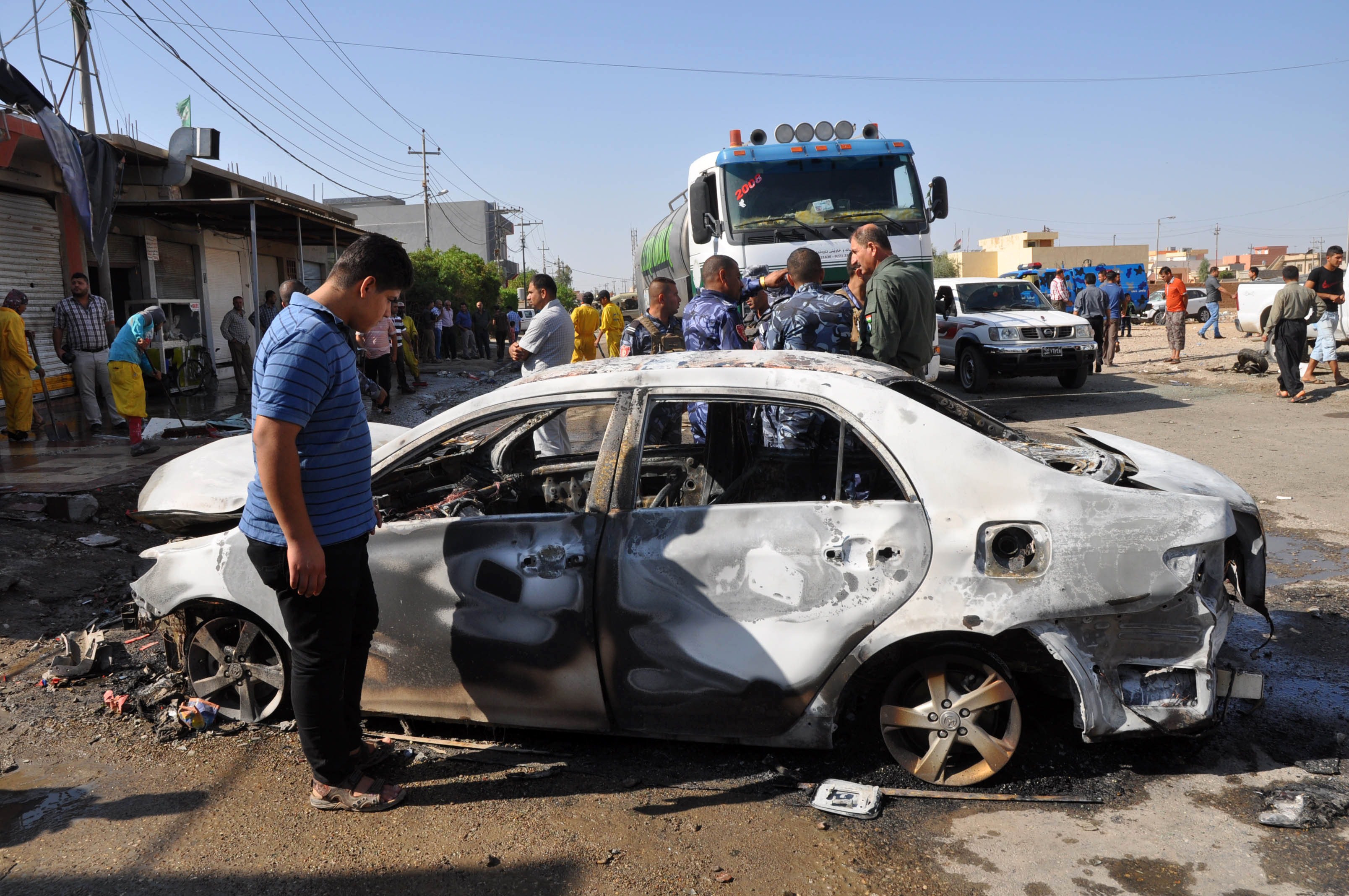 BAGHDAD -- Militants of the Islamic State of Iraq and Syria (ISIS) on Monday captured a military training camp in western Iraq, inching closer to full control of the restive Anbar province, as a spate of deadly bombings shook Baghdad, hitting mostly Shiite neighborhoods and leaving at least 30 dead.

The attacks, which came as Iraqi Shiites marked a major holiday for their sect with families crowding the streets in celebration, raised new concerns that the Sunni militant group is making gains despite U.S.-led coalition airstrikes.

British Foreign Secretary Philip Hammond, on a visit to Iraq, warned that the airstrikes will not be enough to defeat the extremist group and stressed that the Iraqi security forces would have to do the "heavy work on the ground."

But Iraqi troops, overstretched and overwhelmed by ISIS' summer blitz that seized large swaths of territory in western and northern Iraq, continued to come under pressure Monday in the western Anbar province, where militants seized an Iraqi military training camp.

The camp, near the town of Hit that fell to the insurgents earlier this month, was overrun in the morning hours after clashes with Iraqi soldiers who were forced to abandon the camp and withdraw from the area, two Anbar officials told The Associated Press, speaking on condition of anonymity because they were not authorized to talk to the media. Town residents confirmed the camp's fall, speaking to the AP also on condition of anonymity, fearing for their own safety.

ISIS touted its conquest of the camp in a statement Monday. The statement could not immediately be verified but it was posted on militant websites commonly used by the group.

In Baghdad, which has largely been spared the violence seen in other parts of Iraq amid ISIS' onslaught, bombings killed at least 30 people and wounded scores more Monday.

The attacks, hitting three Shiite-majority neighborhoods, came as many Iraqi Shiites families took to the streets to celebrate the Eid al-Ghadeer holiday, which commemorates the Shiite Imam Ali, the Prophet Muhammad's cousin and son-in-law and the sect's most sacred martyr.

Inside Baghdad itself, there are ISIS sleeper cells that carry out almost daily bombings and assassinations, CBS News correspondent Elizabeth Palmer reported.

An Iraqi officer told CBS News that the U.S.-led airstrikes are helping to clear an ISIS-free buffer zone around the city, where there are Iraqi boots on the ground. In fact, there are 60,000 men assigned to defend the capital, and CBS News correspondent David Martin reports that there are 12 teams of American advisers deployed with the Iraqi brigades. The estimate is that the Iraqi army will fight for the capital and there is no real concern that Baghdad is in imminent danger, Martin says.

Still, questions remain as to whether the Iraqi are disciplined enough to put up a sufficient fight if ISIS launches a major offensive.

In the eastern Habibiya district, police said 15 people died and 34 were wounded when a suicide bomber rammed his explosive-laden car into a police checkpoint. Earlier in the day, a car bomb struck near a bus stop in northern Baghdad, killing 11 and wounding 22. And in the sprawling district of Sadr City, a bomb hidden in a vegetable cart killed four and wounded 18.

Hospital officials confirmed the casualties. All spoke on condition of anonymity because they were not authorized to talk to media.

No one immediately claimed responsibility for the attacks but the ISIS fighters say they have a foothold inside Baghdad and have claimed several large-scale bombings in the city in the past months, particularly in the Shiite stronghold of Sadr City.

In Anbar, the capture of the Iraqi military camp came despite the U.S. airstrikes campaign. The U.S. military, which withdrew its forces from the country in late 2011 after more than eight years of war, first launched the airstrikes in early August to help Iraqi and Kurdish ground forces fight back and retake ground lost to the Islamic State group.

The strikes in Iraq were followed in September by the first U.S.-led airstrikes in Syria, where ISIS has captured much of the country's east, declaring a self-styled caliphate on the territory under its control straddling the Iraqi-Syria border.

Since then, more than a dozen countries have entered the fight, providing air power, weapons or humanitarian assistance to more than a million Iraqis displaced by the militants' offensive.

The British government joined the U.S.-led aerial campaign on Sept. 30 but has refused to join the campaign in Syria, where the Americans have been joined by a coalition of Arab partners. The use of foreign ground troops in the battle against ISIS, however, has been frowned upon, both by the Iraqi government and by foreign governments providing assistance.

"We always understood that our campaign alone was not effective to be decisive in turning the tide against ISIL," Hammond added, using an alternate acronym for the militant group. "But it has halted the ISIL advance, it has forced ISIL to change its tactics and it is degrading their military capabilities and their economic strength, their ability to exploit oil revenues, for example."

The U.S. military said Sunday it conducted an airstrike southwest of Hit, destroying a militant armored vehicle. It said another airstrike southeast of Hit targeted an armored personnel carrier. Airstrikes were also conducted near the Iraqi cities of Ramadi and Kirkuk, U.S. Central Command said.

Meanwhile, the U.N. Office for the Coordination of Humanitarian Affairs said Monday that as many as 180,000 people have been displaced in Anbar because of the fighting in recent days around Hit and Ramadi, the provincial capital.

U.N. estimates "suggest that 75 percent of people from Hit, out of an original population of 300,000, have now fled the town," according to Farhan Haq in New York.

Thousands are "still on the move, many in trucks along the highway and are in urgent need of life-saving assistance including food, water and shelter," he added.