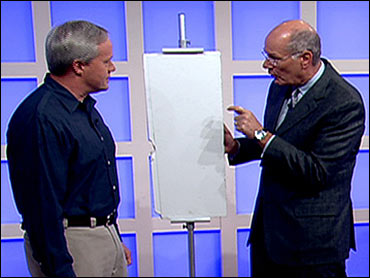 A growing number of Americans are facing a calamity that comes, literally, from within the walls of their homes.
It's estimated that as many as 60,000 houses nationwide, primarily in Southern states and California, were built using contaminated drywall -- also known as wallboard -- in the last several years. That drywall is now beginning to rot.

On The Early Show Friday, home improvement expert Danny Lipford explained that the building boom appears to have been at least partly to blame.

"Everything was so busy back in '03 and '04," he told co-anchor Harry Smith, "they just couldn't keep up with the production of regular drywall. ... They had to start bringing it in from China. That's when the problem started."

On The CBS Evening News Thursday, chief investigative correspondent Armen Keteyian reported that, " chief investigative correspondent Armen Keteyian, " Normally, drywall is made purely from the stone-like mineral gypsum. ... But health officials now suspect at least some of the Chinese product was contaminated with dangerous chemicals, chemicals that have not only damaged homes, but also raise unknown health risks."

Acceptable drywall and the suspicious kind are identical. So how can you that the stuff inside your home's walls may be defective?

"(Odor) is one of the ways you can tell if you have a problem," Lipford says. "If your house stays closed up and you open the doors and you smell that rotten egg smell, you may have a problem with it. ... Sulfur given off by that is creating that smell."

Why is that a problem?

"It's very corrosive to copper," Lipford says. "You have so much copper in your house. Life your refrigerator coil (behind it). And in the air conditioning, electrical service, all of that. When you look at (the copper in those visible places in your house)), it should be a copper color. If it's a dark color, then you may have a problem with the sulfur given off by the drywall."

In addition, the only way to test to see if your drywall is problematic, Lipford says, "is to take a small piece to a lab and see if the sulfur content that's in the drywall is higher than it should be for indoor use like that. And that's when you can really tell."

"If you do have the stuff in your house, Lipford continued, "Unfortunately, there's not much you can do. You can't encapsulate it with paint or anything like that. You have to remove every bit of drywall and then start looking at the things that have been corroded. Those have to be removed too. It's not a good situation."

Also, Lipford points out, "Most insurance companies are denying any coverage on this."

And so, he noted, "Class action suits are popping up all everywhere all over the country right now."

For much more on this, from Lipford, click here.

60 Minutes traveled to China in 2019, where the future of the giant panda species depends on round-the-clock care of its tiniest cubs

The powerful letter "Emily Doe" wrote to address Brock Turner went viral around the world. Here she reads the words herself

The sexual assault survivor also tells "60 Minutes" why she thinks the legal system picks apart victims like her, rather than finding the truth