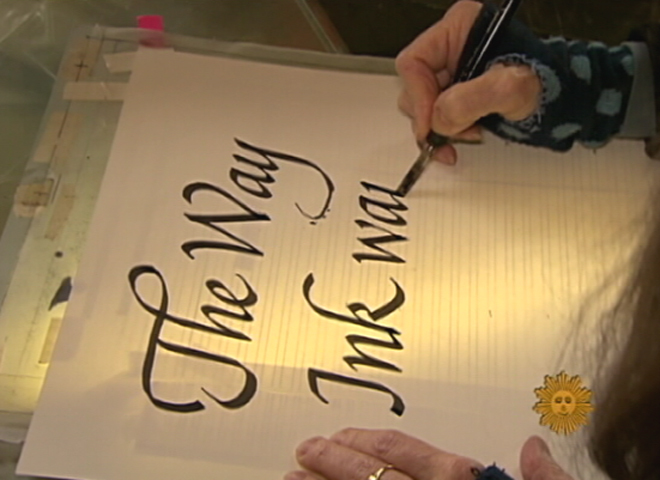 Generations of school kids learned penmanship; whether future generations will learn to write their ABC's by hand at ALL, however, is very much in doubt. Our Cover Story is reported now by Tracy Smith:

Remember this? If it's been a while since you felt the excitement (or the pain) of putting pen to paper, spend a few moments with Krista Walther's kindergarten class in Upper Arlington, Ohio.

"This is not something that you can leave out - you have to teach these fundamental letter formations, or else the kids are really going to struggle," she said.

"You can see so much meaning and passion in their penmanship. You know, even if it's, you know, all in capitals and a mix, it makes you smile."

Handwriting is still an essential skill for kids. But in the world beyond school - the one filled with computers and cell phones and you-name-it - we're losing our grip on penmanship.

It's not that we're not writing. We send 294 billion e-mails, and nearly five billion text messages EVERY DAY.

But for adults, the tactile, personal art of handwriting has pretty much been reduced to shopping lists and credit card signatures.

Tamara Plakins Thornton, a history professor at the State University of New York at Buffalo says that's an old story. "That goes back to the typewriter, actually. It doesn't go back to the computer. We haven't used handwriting the way we used to use handwriting for well over 100 years."

She said handwriting was an issue even in the time of the pilgrims.

"First, you have to recognize that not everybody could write," Thornton said. "And then even more strangely, there were people who could read but not write. The two skills were taught separately and understood to have separate purposes."

In the 1700s and 1800sm, if your handwriting was good enough, you could actually make it a career.

"There were professional penmen - professional writing masters who would produce penmanship tour de forces as a kind of calling card: 'This is what I can do,'" she said.

Platt Rogers Spencer was the first American penman to create a national model for handwriting - and it was a fancy one.

"Spencerian was very fussy and time consuming. You had to get the shading just write," said Thornton. "So, it was slow."

We know Spencerian today as the script used in the Coca-Cola logo. But that's about all.

Because the arrival of the typewriter in the late 19th century presented enormous competition for handwriting, a new man took up the challenge: A.N. Palmer.

Thornton called him "the penmanship emperor of the 20th century."

The Palmer method, like the Spencerian method, is big on physical discipline. It's big on drill work - regimentation that Palmer believed would do more than just create good handwriting, it could make model citizens.

Moreover, handwriting was seen not just as the product of good habits, but of your character itself.

And that gave rise to graphology - handwriting analysis.

It was all the rage, particularly in the early 1900s. There were even graphology columns in magazines, to which readers could submit their handwriting to find out their true self.

One example read: "I can see great deal of narrow mindedness, some priggishness, considerable self satisfaction…"

And get this: before the 1920s, students weren't taught to write in print. They ONLY learned cursive.

So, Abraham Lincoln never printed? "He would not have printed," said Thornton.

And learning script took a lot of time.

"We recommended back then - and most teachers did - about 30 to 45 minutes of direct instructions for handwriting and handwriting practice," said Kathleen Wright, the national product manager for Zaner-Bloser, one of the largest handwriting instruction companies.

Wright says they've had to adapt to all the subjects crammed into a student's schedule.

"We realize that that's an unreasonable amount of time, so we've simplified it to about 15 minutes of direct instructions a day," she said.

Today, children start with print, then move on to a cursive, in lessons that have been whittled down over the years from 45 minutes a day to 15 minutes.

Steve Graham, a literacy expert at Vanderbilt University, said, "The script that we teach kids today is simple and efficient. Americans are all about efficiency - getting it down without having to think about it."

Graham says that just as computers are a technology, so are pencils and paper.

"So, are pen and pencils still the most practical technology we have?" asked Smith.

"Well, they're clearly the simplest," said Graham. "They're the cheapest. And in many ways, the most portable, 'cause you can take them anywhere. Are they the most effective, is a different question. Kids who write on word processors over time have better quality writing."

"So, if kids just bypassed handwriting altogether and started on keyboards, would they suffer?" asked Smith.

"Probably not," said Graham. "You want to be able to make your text legible, and you want to be able to do it quickly, okay? It also can help you learn new words if you trace them or write them out. But if you're asking, 'Does it help you become a better thinker?' there's no evidence that that's the case."

Others disagree with Graham, citing studies that show that for kids, handwriting is more effective than typing for stimulating memory and language skills.

And with computers still scarce in some classrooms - and keyboards a poor fit for kids' hands - all agree: penmanship counts.

And Graham isn't ready to write off good penmanship yet. He says good handwriting does matter.

"If your text is readable, but hard to read, then people form judgments about the credibility of your ideas, based upon your handwriting," he said.

Does our legibility get better as we get older?

No, said Graham. "What happens is you tend to peak around fourth grade. And as you write more, what happens is, you've got to increase your speed."

Some of us are reminded of that 4th grade peak the hard way. When then-British Prime Minister Gordon Brown wrote a letter of condolence to the mother of a soldier killed in Afghanistan, his sloppy hand and spelling errors so incensed her, she released the letter to the press, causing a penmanship scandal.

And most of us don't give OUR OWN handwriting glowing reviews. A Sunday Morning poll finds that while 8 out of 10 of us write at least some of the time, only 18% call their own handwriting "excellent."

Noted calligrapher Margaret Shepherd has written two books encouraging readers to step away from the mouse, and pen handwritten notes.

Shepherd says you shouldn't be concerned about the quality: "Your handwriting is good enough. It doesn't have to be something from a medieval monastery.

"The worst handwriting, the plainest paper, the generic stamp, all that is still way ahead of the best, trickiest, cutest little e-mail," she said. "They're not even in the same category."

After all, so much of our national history has been written by hand … and our personal history, too.

"Whenever I come across a letter of my mother's, it's like I hear her voice, she's in the room with me," she said.

"And for communications between you and someone you really value, a handwritten letter is just awesome. It's a fabulous storage and display device.

"It's much better than a digital file."

And even these fourth graders, still struggling with how to form those cursive capitals, seem to "get" that handwriting has a place.

When asked why handwriting matters, one girl said, "Well, because you can't just have a computer everywhere you go unless you have, like, a laptop. You can't, like, lug it everywhere."

One boy was more practical: "Maybe sometimes if you're like, maybe if you're like stranded on an island or something, then you'll know how to write."

​Q & A with Garrett Morris
Thanks for reading CBS NEWS.
Create your free account or log in
for more features.
View CBS News In
CBS News App Open
Chrome Safari Continue
Be the first to know
Get browser notifications for breaking news, live events, and exclusive reporting.