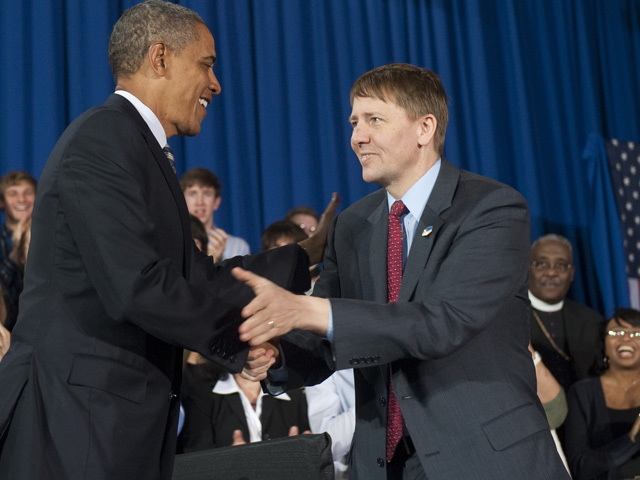 Yesterday President Obama named Richard Cordray director of the Consumer Financial Protection Bureau (CPFB) with what is called a "recess appointment" -- one made while Congress is in recess. He did this because Republican senators had blocked confirmation of Cordray, also a Republican and former attorney general of Ohio. They do not object to Cordray but to how the CPFB is organized. Its financing, for example, comes from the Federal Reserve, which means Congress can't exert pressure on the agency by controlling its budget.

While this type of recess appointment is a common action for presidents, this one is fuelling a lot of argument because the Senate was technically still in session. The GOP senators, fearing Mr. Obama would do this, had been holding pro-forma sessions (pretend sessions where the Senate is called into session but no work is done). Senate Democrats used the same tactic during President Bush's administration.

These "sessions" are held every third day because traditionally Congress has had to be out of session for at least that period of time before a president can make a recess appointment. Cordray's is the first such appointment during a Senate break of fewer than three days since 1949.

Republicans and their allies who oppose the CPFB say Cordray's appointment is illegal. The U.S. Chamber of Commerce has said it is considering whether or not to sue over this. At issue is whether the president can say when Congress is or isn't in session -- a key issue when it comes to the separation of powers of the executive and legislative branches of government.

Also, even if Cordray's appointment is legal, not being confirmed by the Senate may limit the powers he has as the agency's leader. The Dodd-Frank reform bill, which created the CPFB, says it can't commence operations until after its head is confirmed by the Senate. It will be up to the courts to decide how literal that wording is and, until they do, all of the CPFB's actions will be operating under a cloud of uncertainty.

The president says he took the action because he believes the position is a vital one and because so many of his nominees have been stymied by the Senate. According to the White House, 181 nominees are pending before the Senate, with an average waiting time of 165 days.

Mr. Obama had previously found it helpful to recognize Congress' pro forma sessions as actual ones. During one of those pro-forma sessions on Dec. 23, with only two members of the Senate on the floor, both Democrats, the Senate approved by unanimous consent the extension of the 2011 payroll tax cut by two months. Hours later, the president signed the bill into law.