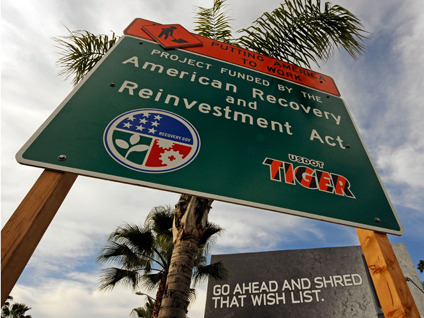 With President Obama unveiling proposals this week meant to bolster the lagging economy, Republicans are again attacking the massive stimulus package passed early in Mr. Obama's term as a failure.

Over the weekend, House Republican Leader John Boehner put out a statement saying that "the White House has chosen to double-down on more of the same failed 'stimulus' spending."

Republican National Committee chair Michael Steele followed that up by also casting the White House's proposals as more "stimulus." He wrote in a Monday statement that the president and fellow Democrats are "recycling the same disastrous policies that failed to generate sustainable job growth and resulted in record deficits," arguing the new plans are "not the response struggling middle-class families are looking for from this White House."

Nevada Republican Senate candidate Sharron Angle, meanwhile, said in a statement today that "instead of listening to Americans, President Obama has proposed spending another $50 billion to stimulate the economy after his $800 billion stimulus package failed miserably."

The "failed stimulus" talking point is also showing up in ads for GOP candidates around the country.

Anticipating such attacks, the White House last week insisted that its proposals do not amount to a "big new stimulus plan" to goose an economy in which the unemployment rate stands at 9.6 percent. White House Press Secretary Robert Gibbs reiterated that point Tuesday, adding, with respect to the new proposals, "I do not think this is anywhere near the level of what was enacted."

But while the word "stimulus" may well be toxic from a political perspective, the notion that the stimulus "failed" is debatable at best. Most independent economists say that the Recovery Act - a $814 billion package of tax cuts, domestic spending and money for safety-net programs - has been responsible for more than 2.5 million jobs and has boosted gross domestic product by $400 billion. Without it, according to chief economist for Moody's Analytics Mark Zandi and former vice chairman of the Federal Reserve Alan Blinder, the unemployment rate would now be at 11 percent.

There is, it should be noted, an argument to be made that the stimulus "failed" from the perspective of not living up to White House projections. In January of last year, now departed White House chief economist Christina Romer said in a report that the stimulus package would keep the unemployment rate below 8 percent. By last July, Republicans were already pointing to the comment.

But it is disingenuous to suggest the stimulus package did not create any jobs, as the GOP statements in recent days imply. Romer originally pushed for a larger stimulus package - something deemed politically impossible at the time - and some economists, including the New York Times' Paul Krugman, say the data show her position has been proven right. The problem, they say, is not too much stimulus but not enough.

Of course, there is little room for nuance when it comes to political messaging. Which is why instead questioning the stimulus within the context of the consensus view that it helped the economy, Republicans are simply hammering it as a failure and ignoring the numbers.

There is a small risk for members of the GOP in casting the economy in such pessimistic terms - no political party wants to be linked too closely to doom and gloom, after all. But there is also political advantage for them in tying the poor economy to Democratic economic policies that they can cast as ineffective. And that means you can expect to hear plenty from the GOP about the supposed "failure" of the stimulus package right through the midterm elections.