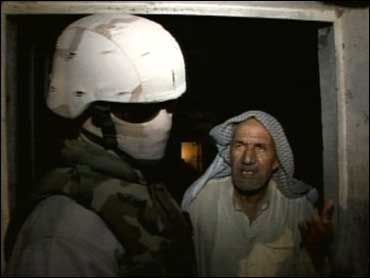 Iraqi interpreters have to keep their faces hidden to survive working so closely with U.S. troops. They are the eyes and ears of American soldiers, but as CBS News chief foreign correspondent Lara Logan reports, for that, they are hunted down and murdered.

There are close to 10,000 translators in Iraq alone — but until now, only 50 special visas to the U.S. have been available each year for both Iraq and Afghanistan.

For interpreters, like "Timmy," whose real name CBS News can't reveal, that lack of special visas is almost a death sentence.

Sgt. Jason Krieger and Timmy are like brothers after nearly a year in combat together.

"He's pulled soldiers out of trucks after the trucks have been hit with an IED. He's protected me while I was rendering first aid to a soldier," Krieger says.

Krieger says he has trusted him with his life multiple times.

Both men believe Timmy will die if he stays in Iraq. But he needs a U.S. general's signature to apply for that special visa. The problem is that he doesn't work with any generals.

Another interpreter who uses the name "Moon," told CBS News she's living on borrowed time. Last year, murderers sent to kill her mistakenly killed another woman on her street.

"When I see strange numbers, I don't answer the phone," Moon says.

"So you have to hide?" Logan asks?

Moon was one of the first to apply for a special visa. She was helped by her colleague, Army Reserve Sgt. Steve Valley. She got initial approval last September but had to wait five months for the State Department to process the application.

Now Moon has to make the costly and dangerous journey to the U.S. Embassy in neighboring Jordan to be interviewed, but there's no guarantee she will get a visa.

"I've seen what these people have gone through, and they deserve better," Valley says.

What these interpreters hoped for when they signed up was a better future inside Iraq. Now their only hope lies outside the land they never wanted to leave.