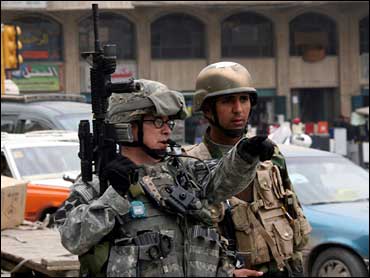 The bodies of 14 Iraqi security officers were found dead Friday after a militant group claimed to have kidnapped them, Iraq's Interior Ministry said.

An al Qaeda-linked Sunni group claimed earlier Friday that it had kidnapped 18 Iraqi government workers and soldiers in retaliation for the alleged rape of a Sunni woman by members of the Shiite-dominated police force.

The claim by the Islamic State of Iraq was posted Friday on a Web site, accompanied by nine pictures showing up to 18 men. Seven were wearing Iraqi military uniforms, and all had their hands tied behind their backs.

It was unclear if the 14 bodies found were those of all the men kidnapped, or if there were more still in captivity or undiscovered. However, the joint U.S.-Iraq operations center in Diyala said Friday that 14 Iraqi policemen had gone missing.

"We work closely with the Iraqi police and Iraqi army to enforce security and prevent these events," said Lt. Col. Michael Donnelly, spokesman for U.S. forces in northern Iraq. U.S. officials were investigating, he said.

"This blessed operation is a response to crimes carried out by those infidels in their fight against the Sunnis," the statement posted by the insurgent group said. "The latest of the crimes committed by these traitors was to rape our sister in religion."

The statement, the authenticity of which couldn't be independently verified, said the kidnap victims were all employees of the Ministry of Interior, which is Shiite-led.

The group did not specify when the kidnapping took place, but an Interior Ministry spokesman said ten policemen were abducted Thursday morning while heading home for leave.

Brig. Gen. Abdul-Karim Khalaf said the men were traveling home to the Shiite town of Khalis, 50 miles northeast of Baghdad. The men were wearing civilian clothes at the time, since there were on leave from duty, he said. An investigation was under way, he added.

Some of the men pictured in the photos posted online appeared to be wearing civilian clothes.

The Web statement referred to the rape victim by her name, which identified her as Sunni.

However, officials of the Iraqi Islamic Party, the country's largest Sunni group, said the woman used a false name when making the allegation and that she is in fact a Shiite. The party's human rights office had been looking into the case. The Associated Press has chosen not to publish her name.

Names of the officers involved in the case were not released, and it was unknown whether they were Sunni or Shiite.

The woman told Arab television stations that she was detained in a Sunni area of west Baghdad on Feb. 18, taken to a police garrison and assaulted by three officers.