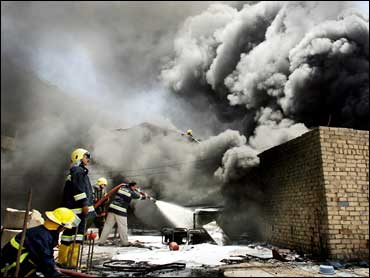 Prime Minister Nouri al-Maliki on Sunday offered an olive branch to insurgents who join in rebuilding Iraq and said lawmakers should set a timeline for the Iraqi military and police to take control of security throughout the country.

The prime minister made no mention of any timetable for the withdrawal of U.S.-led forces in a 24-point national reconciliation plan he presented to parliament.

The plan would include an amnesty for insurgents and opposition figures who have not been involved in terrorist activities, but he never explained how authorities would distinguish that, reports CBS News correspondent Lee Cowan. Al-Maliki stressed that insurgent killers would not escape justice.

"The launch of this national reconciliation initiative should not be read as a reward for the killers and criminals or acceptance of their actions," he said. "There can be no agreement with them unless they face the justice."

The Iraqi leader, who has been in power just over a month, said he was realistic about the difficult road that lay ahead.

"We realize that there is a legion of those who have tread the path of evil (who)... will continue with their criminal acts," he said.

But he held out an offer of peace to those who renounce violence, while threatening retribution and punishment to those who do not.

"To those who want to rebuild our country, we present an olive branch ... And to those who insist on killing and terrorism, we present a fist with the power of law to protect our country and people," he told lawmakers, who applauded his speech.

The plan won the endorsement of the senior Sunni political figure in parliament.

"In the name of Iraqi Accordance Front, I support and agree with this initiative and call upon all Iraqis to support it because it will be the first step toward security, stability and the building new Iraq," said Adnan al-Dulaimi, the leader of Accordance Front, which represents the three key Sunni political parties in parliament.

The Iraqi parliament was to debate the plan, which is believed to face considerable opposition among hard-liners on both sides of the Sunni-Shiite divide.