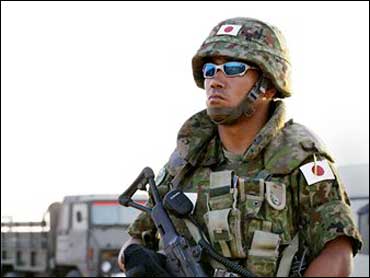 Iraqi Prime Minister Nouri al-Maliki presented his 28-point national reconciliation plan to parliament Sunday, a document that calls for setting a timeline for Iraqi troops to take control of security throughout the country.

The plan would also include an amnesty for insurgents and opposition who have not been involved in terrorist activities. Al-Maliki declared however, that insurgent killers would not escape justice.

"The launch of this national reconciliation initiative should not be read as a reward for the killers and criminals or acceptance of their actions. No, one thousand times no. There can be no agreement with them unless they face the justice."

In the south of Iraq, the first of Japan's force of 600 soldiers being withdrawn from Iraq started crossing the border into Kuwait, according to Associated Press reporters and the Japanese Defense Agency

The Japanese withdrawal of its total force of soldiers conducting a humanitarian and reconstruction mission began with the departure of about 15 vehicles transporting trucks, bulldozers and equipment from the provincial capital of Samawah early Sunday morning for the 210 mile journey south to Kuwait.

As the Japanese ended their mission in Iraq, al-Maliki's reconciliation plan said there should be a timeline established for Iraqi forces to take over all security duties in the country. It, however, included no specifics on the withdrawal of American and British forces, a Shiite lawmaker told The Associated Press.

Al-Maliki said the general amnesty would exclude "those who committed crimes against the Iraqi people."

The most controversial section of the amnesty plan was left ambiguous. Initially it was said to have excluded only those who had killed Iraqi people. But in parliament Sunday, al-Maliki spoke of refusing amnesty to those who had committed terrorist acts, believed to include attacks on American military personnel as well.

The plan also seeks compensation for former detainees "and those who were killed by Iraqi and American forces" and said their time spent in prison would be considered as part of their mandatory military service.

An early draft of the plan also called for a general pardon for thousands of prisoners who are determined not to have committed "crimes and clear terrorist actions."

Hundreds of prisoners have been pardoned and release in recent months in what is seen as a bid by the Shiite-dominated government to appease Sunni Arab anger over allegations of random detentions and maltreatment.

The proposal also would set rules of engagement for military offensives, requiring military leaders to take into consideration and special conditions that might argue against an attack.

That was seen as a bid to alleviate Sunni anger over the alleged killing of innocent civilians and bystanders by U.S. and Iraqi forces.

The reconciliation plan also would call for a reconsideration of policies against supporters of former President Saddam Hussein's outlawed Baath party.

The plan said a dialogue should be opened with all organizations willing to participate in the political process "except al Qaeda" and hard-line supporters of Saddam.

Shortly after taking office May 20, al-Maliki vowed to take over security issues from American and other foreign troops in all of Iraq's 18 provinces within 18 months.

He already has announced plans to take over security from coalition forces in the southern province of Muthanna next month and Japan ordered the withdrawal of its 600 ground troops home from the area.

In Washington, The New York Times reported that U.S. Gen. George W. Casey Jr. has drafted a plan that projects sharp reductions in the United States military presence in Iraq, with the number of American combat brigades projected to decrease to 5 or 6 from the current level of 14 by the end of 2007.

The first reductions would involve two combat brigades that would rotate out of Iraq in September without being replaced, according to the plan Combat brigades, which generally have about 3,500 troops, do not make up the bulk of the 127,000-member American force in Iraq.

The report cited officials describing a classified briefing at the Pentagon this week by Casey, the top U.S. commander in Iraq.

Military officials in Iraq, who spoke to The Associated Press on condition on anomymity because they were not authorized to disclose the information, said there were plans to start the withdrawal by pulling out two brigades in late summer or early fall. Those troops could included forces currently based in the west of Baghdad and in Salaheddin province to the north of the capital.

The administration has repeatedly said that U.S. troops will stay in Iraq until Iraqi security forces can defend the country against a lethal insurgency that rose up after the 2003 U.S.-led invasion toppled Saddam Hussein.

Casey said earlier this week that he expected reductions in U.S. forces this year but did not agree with congressional efforts to put a timetable on the effort.

"I don't like it, I feel it would limit my flexibility" and give the enemy a schedule to focus on, he said.

In addition to the two U.S. soldiers killed by a bomb Saturday while patrolling on foot south of Baghdad, four American soldiers died Friday, including three killed by roadside bombs in separate attacks in Baghdad and another who died in a non-combat incident.

The military did not give more details about the deaths, but U.S. forces have been increasingly visible in Baghdad recently as they move through the city in support of 75,000 Iraqi troops trying to restore security to the capital.