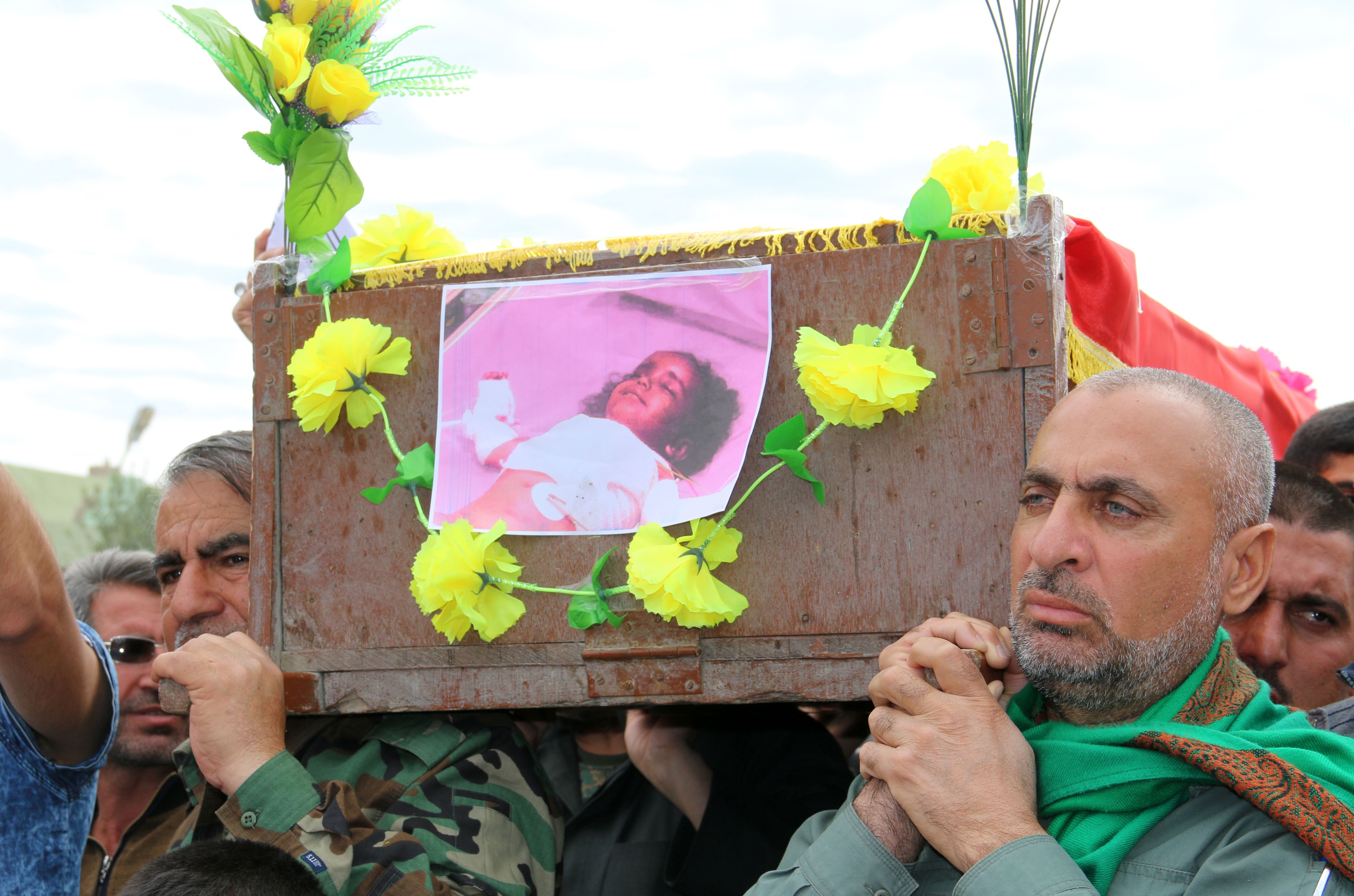 "What the Daesh terrorist gangs did in the city of Taza will not go unpunished," Iraqi Prime Minister Haider al-Abadi said, using an alternative name for ISIS during a meeting with village elders in the small town of Taza on Saturday. "The perpetrators will pay dearly."

Sameer Wais, whose daughter Fatima was killed in the attack, is a member of a Shiite militia fighting ISIS in Kirkuk province. He said he was on duty at the frontline when the attack occurred early in the morning, quickly ran home and said he could still smell the chemicals in the rocket.

Wais said his daughter appeared to be doing better the next day so they took her home. "But by midnight she started to get worse. Her face puffed up and her eyes bulged. Then she turned black and pieces of her skin started to come off," he said.

By the next morning, Fatima had died, Wais said.

The hundreds of wounded are suffering from infected burns, suffocation and dehydration, said Helmi Hamdi, a nurse at the Taza hospital. He said eight people were transferred to Baghdad for treatment.

"There is fear and panic among the women and children," said Adel Hussein, a local official in Taza. "They're calling for the central government to save them." Hussein said a German and an American forensics team arrived in the area to test for the presence of chemical agents.

CBS News national security correspondent David Martin reported Delta Force commandos captured the Iraqi who had once worked for the regime of Saddam Hussein. After interrogating him, U.S. intelligence was able to identify a building in Mosul where mustard agent was manufactured and loaded into artillery shells.

Video released by the British Defense Ministry shows a building described as an ISIS weapons factory being destroyed by an airstrike last weekend.

By the Pentagon's count, ISIS has mounted a dozen chemical weapons attacks in Iraq and Syria, a fact confirmed by CIA Director John Brennan in a "60 Minutes" interview.

"We have a number of instances where ISIL has used chemical munitions on the battlefield," Brennan said.

"There are reports that ISIS has access to chemical precursors and munitions that they can use," Brennan said.

The day before the strike on the chemical weapons building, U.S. aircraft targeted a top ISIS commander, known by the alias Omar the Chechen, who the Pentagon considered to be the equivalent of the group's Secretary of Defense.

U.S. intelligence was trying to confirm if he was in fact killed.

The U.S.-led coalition said the chemicals ISIS has so far used include chlorine and a low-grade sulfur mustard which is not very potent. "It's a legitimate threat. It's not a high threat. We're not, frankly, losing too much sleep over it," U.S. Army Col. Steve Warren told reporters Friday.

Experts also say the extremist group appears incapable of launching a large-scale chemical weapons' attack, which requires not only expertise, but also the proper equipment, materials and a supply-chain to produce enough of the chemical agent to pose a significant threat.

Airstrikes are targeting laboratories and equipment, and further special forces raids targeting chemical weapons experts are planned, the officials said. They spoke on condition of anonymity because they were not authorized to brief reporters.

The extremist group is believed to have set up a special unit for chemical weapons research made up of Iraqi scientists who worked on weapons programs under Saddam Hussein as well as foreign experts.

The group is believed to have created limited amounts of mustard gas. Tests confirmed mustard gas was used in a town in Syria when ISIS was launching attacks there in August 2015. There have been other unverified reports of ISIS using chemical agents on battlefields in Syria and Iraq.

Separately, attacks across Baghdad Saturday killed 13 and wounded 27. The attacks were mostly carried out with homemade bombs placed along roads in the capital's southern and eastern neighborhoods. There were no immediate claims of responsibility, but ISIS often claims responsibility for bomb attacks in the Iraq capital targeting civilians.

As the group has endured territorial losses in Iraq -- most recently the city of Ramadi which was declared "fully liberated" by Iraqi and U.S. officials last month -- they have stepped up insurgent style attacks in Baghdad and other areas far from the front lines.

The mustard agent that ISIS is using is not very toxic, Gordon says, but "it has a huge physiological impact that far outweighs its physical impacts."

Fatima's father Wais said he was planning to return to the frontline with ISIS as soon as possible. "Now I will fight Daesh more than before, for Fatima."