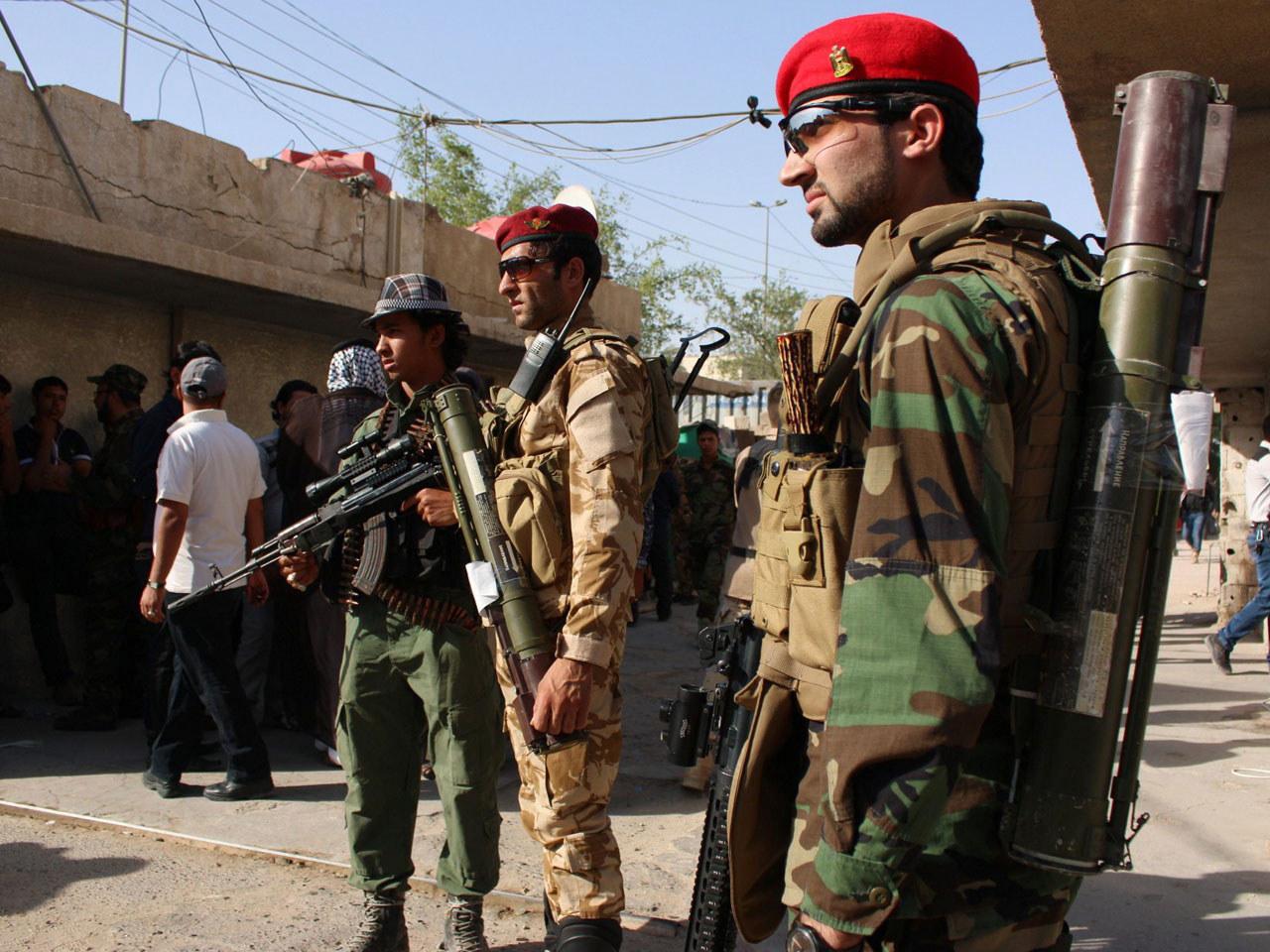 BAGHDAD - Iraqi security officials say an army helicopter has been shot during clashes with Islamic militants west of Baghdad.

They said the helicopter's two-man crew was killed when their aircraft was shot down Monday near the city of Fallujah in Anbar province. Fallujah has been under the control of Sunni militants since January.

In a sign of Iran's deepening involvement in the Iraqi crisis, the commander of Tehran's elite Quds Force is helping Iraq's military and Shiite militias gear up to fight the Sunni insurgents who have advanced across the country, officials said Monday.

Iranian Gen. Ghasem Soleimani has been consulting in Iraq on how to roll back the al Qaeda-breakaway group, known as the Islamic State of Iraq and the Levant (ISIS, or sometimes call ISIL), according to Iraqi security officials.

In its latest success, the group Monday seized the strategic city of Tal Afar near the Syrian border, part of its goal of linking areas under its control on both sides of the Iraq-Syria frontier.

In a further dramatic shift unthinkable only weeks ago, Washington says it is willing to talk with Tehran on turning back the insurgents' advance after years of trying to limit Iran's influence in Baghdad.

The security officials said the U.S. government was notified before Soleimani's visit.

Soleimani has been inspecting Iraqi defenses and reviewing plans with top commanders and Iranian-backed Iraqi Shiite militias, the officials said. He has set up an operations room to coordinate the militias and visited the holy cities of Najaf and Karbala south of Baghdad, home to the most revered Shiite shrines, and areas west of Baghdad where government forces have faced off with Islamic militants for months.

The Islamic State has threatened to march to Baghdad, Karbala and Najaf, and a call to arms Friday from Iraq's top Shiite cleric, the Iranian-born Grand Ayatollah Ali al-Sistani, was mostly focused on the need to defend the holy shrines.

Soleimani's visit adds significantly to the sectarian slant of the mobilization by the government of Prime Minister Nouri al-Maliki. Armed Shiite militiamen have been parading on the streets and volunteers joining the security forces are chanting Shiite religious slogans.

Al-Maliki rejects charges of sectarianism and points to recruiting efforts by some Sunni clerics, but there is no evidence of Sunnis joining the fight against the Islamic State in significant numbers, if at all.

The legitimacy accorded by his government to the Shiite militias poses a risk of Iraq sliding back into the deadly sectarian bloodshed of 2006 and 2007.

Such tensions were rising months before the Islamic State's lightning incursion of last week, with thousands killed since late last year. Bombings killed Shiites and members of the security forces as militants took hold of vast territory and at least one city in the mainly Sunni Anbar province west of Baghdad.

Soleimani is one of the most powerful figures in Iran's security establishment, and his Quds Force is a secretive branch of Iran's Revolutionary Guard involved in external operations. In the mid-2000s, it organized Shiite militias in a campaign against U.S. troops in Iraq, according to American officials. More recently, it has been involved in helping Syrian President Bashar Assad in his fight against Sunni rebels.

His visit and the empowerment of the Shiite militias that his Quds Force trains and arms means Iran could take a role in Iraq similar to the one it plays in Syria. The Quds Force - along with Iraqi and Lebanese Shiite fighters - has been crucial to the survival of Assad, himself a member of a sect that is an offshoot of Shiite Islam.

U.S. Secretary of State John Kerry said in an interview with Yahoo! News that Washington is "open to discussions" with Tehran if the Iranians can help end the violence and restore confidence in the Iraqi government.

U.S. officials said earlier there is a possibility that a senior American diplomat may discuss Iraq with an Iranian delegation at nuclear talks in Vienna.

The Sunni militants' capture of the city of Tal Afar was a key prize because it sits on a main highway between Syria and Mosul, Iraq's second-largest city, which the Islamic State captured last week.

Farther south, the ISIS militants battled government troops at Romanah, a village near another main border crossing to Syria in Anbar province, according to a security official in Baghdad. The official spoke on condition of anonymity because he was not authorized to talk to the media.

The Islamic State already controls territory in Syria in several regions next to the Iraq border. Its fighters move relatively freely across the porous, unprotected desert border, along with money, weapons and equipment. Seizing an actual border crossing, however, would be a major symbolic gain for the group.

Tal Afar has a population of about 200,000 and is located 420 kilometers northwest of Baghdad. Its residents are mostly ethnic Shiite and Sunni Turkomen, raising fears of atrocities by Islamic State fighters, who brand Shiites as heretics.

Over the weekend, the group posted graphic photos purporting to show its fighters killing scores of Iraqi soldiers captured when it overran other areas.

The local security force fled before dawn, and local tribesman who continued to fight later surrendered to the militants, al-Abadi said as he prepared to head out of town with his family.

Another resident, Haidar al-Taie, said a warplane dropped barrels packed with explosives on militant positions inside the city Monday morning, and many Shiite families had left the town shortly after fighting broke out a day earlier.

"Residents are gripped by fear and most of them have already left the town for areas held by Kurdish security forces," al-Abadi said. The city lies just south of the self-rule Kurdish region and many residents were fleeing to the relatively safe territory, joining an influx of refugees from Mosul and other areas that have been captured by the militants.

Some 3,000 others from Tal Afar fled west to the neighboring town of Sinjar.