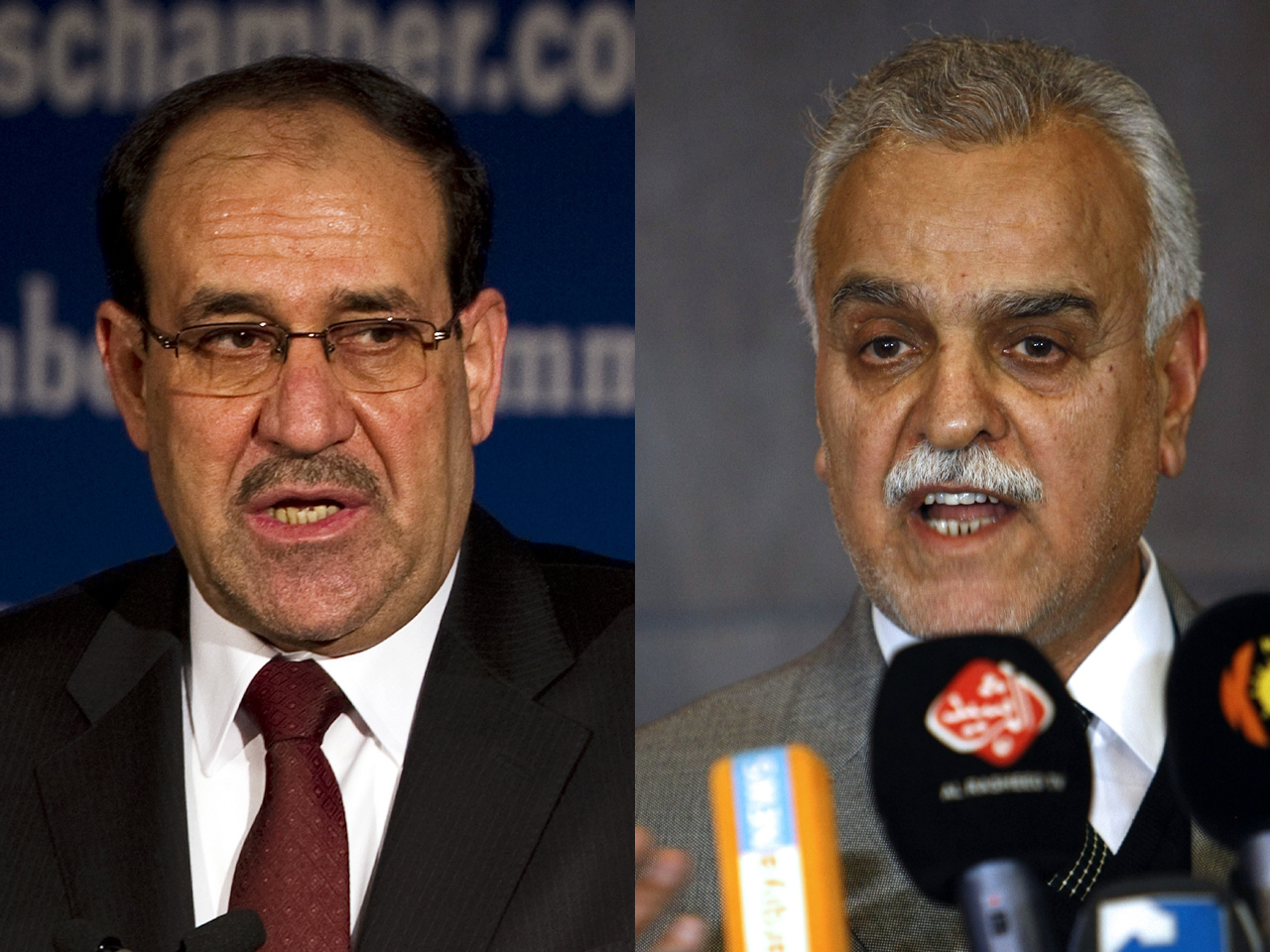 The charges, leveled a day after the last American troops left Iraq, have opened up a new round of the Shiite-Sunni sectarian tensions that pushed the country to the brink of civil war just a few years ago.

Tariq Al-Hashemi, the country's highest-ranking Sunni political figure, said Monday the allegations by his longtime rival Prime Minister Nouri al-Maliki are fabricated and politically motivated. He accused al-Maliki of concentrating power in his hands and torpedoing national reconciliation between Sunnis and Shiites.

"I do not allow myself and others to bargain over Iraqi blood," al-Maliki said in his first public comments on the warrant. He said Iraq is a unified county and the Kurdish authorities should hand over al-Hashemi to the Iraqi justice system. "If they will not hand him over or let him flee or escape, this will lead to problems," the premier said.

There has been speculation that al-Hashemi may try to flee the country to Turkey, which shares a border with the northern Kurdish region.

The Sunni minority dominated Iraq under Saddam Hussein until he was ousted by the U.S.-led invasion in 2003. The Shiites have held power ever since, and many Sunnis feel the Shiite-led government is determined to keep the them from ever regaining positions of power.

The charges raised suspicions that al-Maliki ordered the arrest of al-Hashemi as part of a campaign to consolidate his hold on power out of fear that Sunnis inside and outside of Iraq are plotting against him. The conflict has sharpened the divisions in what is shaping up to be one of the most serious political confrontations in Iraq in years.

Al-Hashemi denied charges he paid his bodyguards to kill government officials during the heyday of Iraq's Sunni insurgency. Most of the accusations date back to the height of the war in 2006 and 2007, when neighbors turned on neighbors and whole sections of Baghdad were expunged of one Muslim sect or the other.

Al-Hashemi fled to the Kurdish region on Sunday, before the arrest warrant was announced and before purported confessions from his bodyguards aired on Iraqi television Monday evening. He was barred from leaving the country on Sunday.

Al-Maliki effectively runs the Interior Ministry, where the charges originated. Al-Hashemi's Sunni-backed party Iraqiya, which shares power in Al-Maliki's government, has repeatedly accused the prime minister of hoarding power and last weekend boycotted parliament because al-Maliki refused to give up control over key posts such as the defense and interior ministries. The prime minister has not appointed permanent ministers of defense or interior since he came to office a year ago.

Al-Hashemi has taken refuge in the Kurdish region, which is part of Iraq, but has its own security forces. Iraqi Army and national police do not operate there.

As long as the Kurdish officials allow him to stay there, he is effectively immune from prosecution in Baghdad. The Kurds, who have been trying to work out a solution to the crisis, are also wary of al-Maliki's perceived authoritarian streak. But they have also clashed with Sunni politicians from Iraqiya over the future of disputed areas in northern Iraq claimed by both Baghdad and the Kurds.

The charges have thrown Iraq into crisis just days after the last U.S. troops left the country and ended a nearly nine-year war. Al-Maliki is also pushing for a vote of no confidence against the Sunni Deputy Prime Minister, Saleh al-Mutlaq, also a member of Iraqiya.

Al-Hashemi addressed the charges against him at a news conference in the northern city of Irbil on Tuesday. He said the case was "fabricated" to embarrass him and Iraqiya.

When asked whether al-Hashemi could get a fair trial in Iraq considering that the confessions have already aired on television, al-Maliki defended the treatment of the vice president.

"We gave the dictator Saddam a fair trial, and we will guarantee a fair trial for al-Hashemi," he said.

Al-Maliki also threatened to appoint new cabinet ministers if the ministers from Iraqiya do not attend Cabinet sessions. However, he said that Iraqiya would be able to keep those positions and nominate new people from within their ranks.

Iraqiya has not indicated whether they will pull out of the government, but al-Maliki seemed prepared for that eventuality. He did not address Iraqiya directly but during his opening remarks raised the possibility of having a majority government.

Right now, Iraq has a unity government that includes all the major factions, including Iraqiya and al-Maliki's State of Law alliance. The unwieldy government makes it extremely difficult to make decisions but supporters say it lessens the risk of violence if large segments of the population are cut out of power.