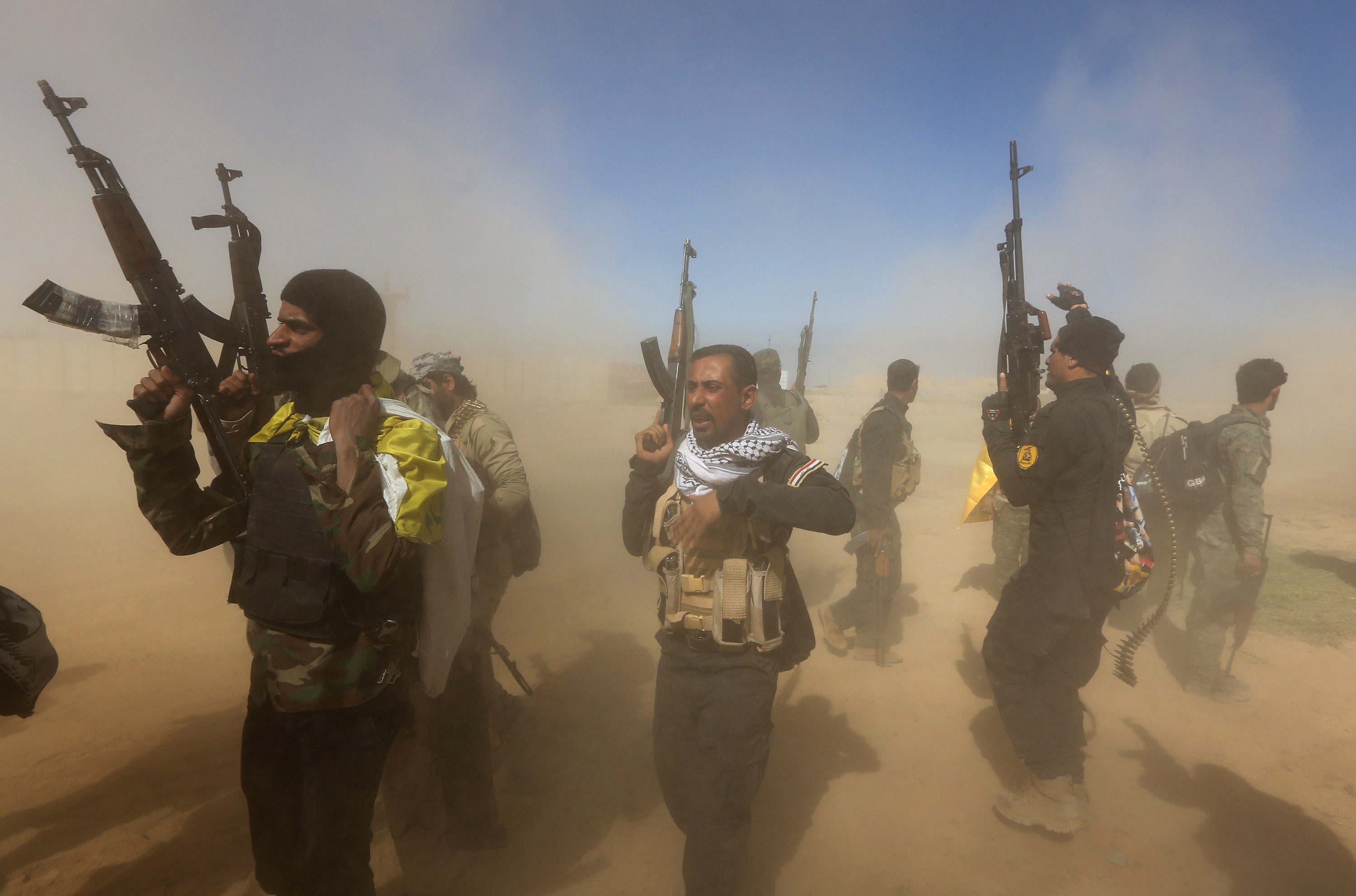 BAGHDAD -- Iraqi soldiers and allied Shiite militiamen swept into the Islamic State of Iraq and Syria (ISIS) held northern city of Tikrit on Wednesday, launching a two-front offensive to squeeze extremists out of Saddam Hussein's hometown in a major test of the troops' resolve.

Explosions and heavy gunfire echoed through Tikrit, a key way station for Iraqi forces trying to expel the militants who hold roughly a third of the country and neighboring Syria. The battle also will serve as a major crucible for Iraqi forces, which collapsed under the extremists' initial offensive last year and now face street-by-street fighting in one of the Islamic State group's biggest strongholds.

According to the Reuters news agency, the office of Salahuddin province governor Raed al-Jubouri said in a statement that "half of Qadisiya district, the largest of Tikrit's neighbourhoods" had been secured by the Iraqi troops and their Iranian-backed Shiite allies.

A local official in Iraq's Salahuddin province confirmed that Iraqi troops entered Qadisiyya, and penetrated the northern suburbs, raising the Iraqi flag over Tikrit's general hospital. He spoke on condition of anonymity as he was not authorized to brief journalists.

Later Wednesday, allied forces also swept into Tikrit from the south in a pincer movement to squeeze out militants, though some suggested many already fled in the face of the advance.

"The terrorists are seizing the cars of civilians trying to leave the city and they are trying to make a getaway," Rasheed said.

The government and allied forces have been closing in on Tikrit for days, capturing the town of Alam on its outskirts Tuesday and sealing off ISIS in preparation to confront the extremists in one of their biggest strongholds, officials said.

The fight for Tikrit is being seen as the ultimate battle-readiness test for Iraqi forces now advancing there without the support of U.S.-led airstrikes which has helped them reclaim territory elsewhere in the country. Their operation likely will set the stage for how Iraq attempts to retake the more-densely populated cities of Mosul and Fallujah from the militants.

Iraqi forces entered Alam early Tuesday morning, their armored convoys roaring past the empty arid fields and occasional palm tree before gaining full control hours later, two Iraqi officials said. By nightfall, the military had sealed off Tikrit on all sides, the officials said, speaking on condition of anonymity because they were not authorized to talk to journalists.

Gen. Maan said some ISIS fighters had tried to escape the encircled city to the north, but Iraqi troops "killed so many of them."

But Williams says the truth is, ISIS has put up a fierce resistance in Tikrit, fighting back with weapons including landmines and suicide bombs.

The Iraqi Government denies that troops from neighboring Iran are fighting alongside its soldiers around Tikrit, saying Iranian officers are serving only as advisers.

"If there is a disaster in Iraq, of course it will affect Iran," said Gen. Maan.

After seizing Alam, Shiite militiamen held assault rifles over their heads, chanting that ISIS was "unable to conquer us." Their involvement has been key in the Iraqi offensive, as has the involvement of Iranian military advisers guiding them.

But if the rag-tag alliance fighting ISIS does manage to retake Tikrit, Williams says some fear the victory could lead to more bloodshed, sparked by Iraq's decades-old religious tensions. The Iranians are Shiite Muslims, as are most of the Iraqi forces, but Tikrit is a mainly Sunni Muslim city.

But Williams says Shiite Muslim militias have already been accused of massacring more than 70 unarmed Sunni men after they defeated ISIS in Diyala Province. Witnesses claim that Iraqi government soldiers watched and did nothing to stop the massacre. Iraqi officials say they're investigating.

Most battlefield successes in Iraq have been coordinated efforts, with Iraqi and Kurdish forces and Shiite militias fighting on the ground and the U.S.-led coalition providing air power. The siege of the village of Amirli just north of Baghdad, when many feared the capital itself might fall, was broken last year with the help of U.S.-led airstrikes and a fighting force of mainly Shiite militias. Shiite militiamen backed by a coalition air campaign also retook the town of Jurf al-Sukhr, on Baghdad's outskirts, from the militants in October.

Soleimani was a key player in both of those campaigns. But Iraqi and Kurdish officials and Shiite militia fighters all acknowledge the crucial role the coalition airstrikes played in their modest victories. And so far, the U.S. has said it isn't coordinating with Iran on its strikes and hasn't been asked to provide aerial support in the Tikrit offensive.

U.S. military officials have that said a coordinated military mission to retake Mosul, Iraq's second-largest city, likely will begin in April or May and involve up to 25,000 Iraqi troops. But the Americans have cautioned that if the Iraqis are not ready, the offensive could be delayed.

ISIS holds a third of Iraq and neighboring Syria in its self-declared caliphate. In Syria, activists said Tuesday that more than 70 prisoners escaped from an ISIS jail in the northern town of Al-Bab, with militants searching for those who fled.

In recent months, ISIS has been defeated in some parts of Syria, but the militants reportedly launched a new offensive Tuesday on a town along the country's border with Turkey.

A Kurdish official and an activist group said Wednesday that ISIS militants had launched an offensive against the predominantly Kurdish town of Ras al-Ayn, home to about 50,000 people and a border crossing with Turkey, although the fighting seemed to be limited to the surrounding countryside.

"There are more than 1,000 ISIS fighters taking part in the attack. It's a large number," he added.

The ISIS offensive carries echoes of the militant group's ultimately failed attack on the predominantly Kurdish border town of Kobani. Kurdish fighters backed by airstrikes from the U.S.-led coalition repelled that assault in January after four months of heavy fighting that left Kobani in ruins.