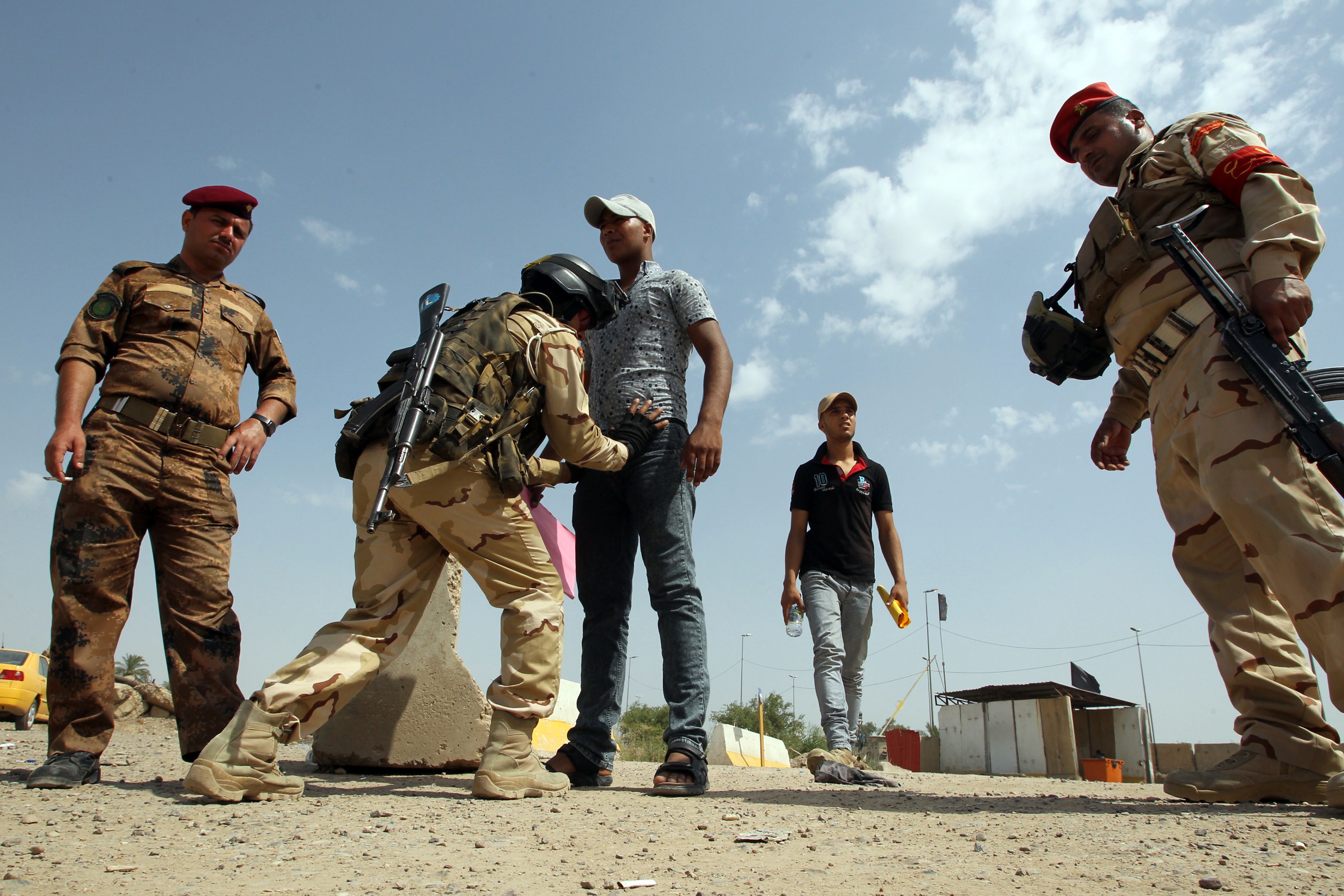 The fresh gains by the fighters from the Islamic State of Iraq and Syria (ISIS) come as Prime Minister Nouri al-Maliki's Shiite-led government struggles to form a coherent response after the Sunni militants blitzed and captured the country's second-largest city of Mosul as well as other, smaller communities and military and police bases - often after meeting little resistance from state security forces.

The new reality is the biggest threat to Iraq's stability since the U.S. withdrawal at the end of 2011, and it has pushed the nation closer to a precipice that could partition it into Sunni, Shiite and Kurdish zones.

Iraqi soldiers abandoned their posts there without any resistance, said the officials, speaking on condition of anonymity because they were not authorized to talk to media. The officials also said Kurdish forces from northern Iraq's semi-autonomous Kurdish region entered Jalula to secure offices of Kurdish parties in the town but no clashes were reported between the two groups.

ISIS fighters have vowed to march on Baghdad and are being joined in their rebellion by Saddam Hussein-era loyalists and other disaffected Sunnis.

Trumpeting their victory, the militants also declared they would impose Shariah law in Mosul, which they captured on Tuesday, and other areas they seized.

A video posted online showed ISIS fighters holding a parade in a Mosul neighborhood, with many of the gunmen seen purportedly sporting armored vehicles and American-made Humvees seized from Iraqi army and police.

A fighter using a loudspeaker urged the people to join the militant group "to liberate Baghdad and Jerusalem." The Islamic State's black banners adorned many of the captured vehicles. Some in the crowd shouted "God is with you" to the fighters.

The video appeared authentic and consistent with AP reporting of the events depicted.

But in the Shiite holy city of Kabala, Iraq's grand ayatollah declared a "sufficiency jihad" in Iraq.

Ayatollah Ali al-Sistani urged Iraqis to defend the nation and its holy sites, and bravely confront terrorist groups. In a Friday prayers' sermon at the Hussaini Shrine, Sistani's representative, Sheikh Abdul Mahdi al-Karbalai told thousands of worshipers that "all those who can take up arms must volunteer to confront the terrorists, adding that the call was going out to all Iraqis, not just Shiites.

Experts say that move matters -- it opens the window wider for sectarian war between Shiites and Sunnis, without even a provocative incident to trigger it.

In northern Iraq, Kurdish security forces have moved to fill the power vacuum caused by the retreating Iraqi forces - taking over an air base and other posts abandoned by the military in the ethnically mixed city of Kirkuk.

In Iraqi Kurdistan - an autonomous region that's been relatively peaceful since the U.S. invasion in 2003 - Kurdish leader Juaud Mohammed told CBS News correspondent Holly Williams the Iraqi soldiers simply melted away. "The Iraqi army is useless," he said. "They don't fight for any principles. They abandoned their equipment and their weapons."

Hundreds of thousands of refugees have fled the violence - many into Kurdistan --but very few of them blame the militants, Williams reports. Like the armed Islamic extremists, they're Sunni Muslims - and resent the government in Baghdad.

Three planeloads of Americans were being evacuated from a major Iraqi air base in Sunni territory north of Baghdad, U.S. officials said Thursday, and Germany urged its citizens to immediately leave parts of Iraq, including Baghdad.

President Obama said Iraq will need more help from the United States, but did not specify what it would be willing to provide.

A Pentagon official told CBS News correspondent David Martin no decision has been made to provide additional assistance or what it would look like. Air strikes are being considered looked at as an option, but "we are no closer (to air strikes) today than yesterday (Wednesday)," said the official, who added it as unclear how effective the strikes would be.

Senior U.S. officials who spoke to The Associated Press on condition of anonymity because they were not authorized to discuss the matter by name said Washington is considering whether to conduct drone missions in Iraq.

The U.N. Security Council met on the crisis, underscoring the growing international alarm over the stunning ISIS advances.

Separately, Iran, heavily populated by Shiite Muslims, "is so alarmed by Sunni insurgent gains in Iraq that it may be willing to cooperate with Washington in helping Baghdad fight back," the Reuters news agency quotes a senior Iranian official as saying.

In Iraq, Al-Maliki had asked parliament to declare a state of emergency that would give him and his Shiite-led government increased powers to run the country, but the lawmakers failed to assemble a quorum on Thursday.

In Saddam's hometown of Tikrit, overrun by the militants on Wednesday, witnesses said fighters raised posters of the late dictator and Izzat Ibrahim al-Douri, his former deputy who escaped the 2003 U.S.-led invasion and has eluded security forces ever since.

Fighters loyal to his Naqshabandi Army as well as former members of Saddam's Baath Party were the main militant force in Tikrit on Thursday, said a resident who identified himself by his nickname, Abu Mohammed, out of concern for his safety. He said about 300 soldiers surrendered near the governor's office.

Lawmaker Hakim al-Zamili as well as two senior intelligence officials, who were not authorized to talk to the media, confirmed the involvement of al-Douri's group and other former Baathists and Saddam-era military commanders.

That could escalate the militants' campaign to establish an al-Qaeda-like enclave into a wider Sunni uprising and lead to breaking up the country along ethnic and sectarian lines.

With its large Shiite population, Baghdad would be a far harder target for the militants. So far, they have stuck to the Sunni heartland and former Sunni insurgent strongholds where people are already alienated by al-Maliki's government over allegations of discrimination and mistreatment. The militants also would likely meet far stronger resistance, not only from government forces but by Shiite militias.

Baghdad authorities tightened security and residents stocked up on essentials. Hundreds of young men crowded in front of the main army recruiting center in Baghdad on Thursday after authorities urged Iraqis to help battle the insurgents.

"We do have a stake in making sure that these jihadists are not getting a permanent foothold in either Iraq or Syria, for that matter," Mr. Obama said in Washington.

Meanwhile, diplomatic efforts were under way to free 80 Turkish citizens held by militants in Mosul, an official in the Turkish prime minister's office said. The captives include 49 people seized in the Turkish consulate Wednesday, said an official, who spoke on condition of anonymity because of the sensitivity of the issue.

Kurdish fighters from the ethnic group's autonomous enclave in the north showed signs of taking a greater role in fighting back against the Islamic State. Their role is a potential point of friction because both Sunni and Shiite Arabs are wary of Kurdish claims on territory.

Kurdish security forces known as peshmerga took over an air base and other posts abandoned by Iraqi forces in Kirkuk, Brig. Halogard Hikmat, a senior peshmerga official told The Associated Press. He denied reports the whole city was under peshmerga control.