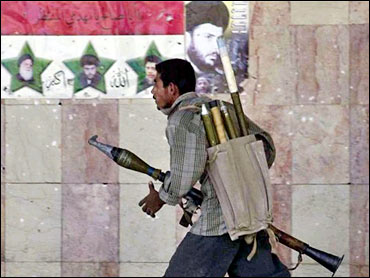 Militants said they took a top Iranian diplomat hostage, according to video shown on the Arab-language Al-Arabiya television station.

The tape showed a bearded man identified as Faridoun Jihani speaking to the camera, though his voice was not audible.

The video also showed his identification, passport and a business card identifying him as the "consul for the Islamic Republic of Iran in Karbala," a southern Iraqi city.

The kidnapping has been confirmed by the Iranian embassy in Baghdad.

The kidnappers, calling themselves the "Islamic Army in Iraq," accused Jihani of provoking sectarian war in Iraq and warned Iran not to interfere in Iraq's affairs, according to Al-Arabiya.

The kidnappers made no other demands.

The Iranian government is also on the receiving end of a more official message from Iraq. Iraqi Defense Minister Hazem Shaalan on Monday accused Iran of sending weapons to Shiite insurgents in Najaf, where U.S. troops and Iraqi security forces have fought for the past five days against soldiers loyal to Shiite leader Muqtada al-Sadr, many of them reported to be Iranian.

"There are Iranian-made weapons that have been found in the hands of criminals in Najaf who received these weapons from across the Iranian border," said Shaalan. "From far and near, the facts that we have say that what has happened to the Iraqi people is done by the one who is considered as the first enemy."

The U.S. military says hundreds of militants were killed in Najaf Thursday and Friday; the militiamen have put the number far lower.
Monday, at least three people, including two policemen, were killed and at least 19 others were injured.