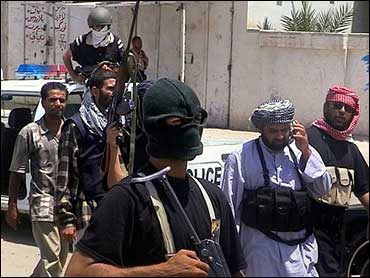 Interim Iraqi Prime Minister Ayad Allawi signed a long-awaited amnesty law Saturday that would pardon Iraqis who have played minor roles in the country's 15-month-long insurgency, but not those guilty of killing.

The amnesty had been expected to be a key element in the government's efforts to coax Iraqis away from the anti-U.S. campaign, but the more limited offer is unlikely to dampen the violence.

Iraqi officials had earlier said the amnesty might extend to those who killed U.S. and other coalition troops. U.S. officials said an early draft contained ambiguous language on that issue, but later drafts ruled it out.

The announcement came as sporadic clashes continued in the holy Shiite city of Najaf, but fighting was largely calmed after two days of the most intense battles between U.S. forces and Shiite Muslim militiamen in months. The fighting Thursday and Friday spread to other Shiite communities and threatened to reignite a Shiite insurrection.

Much of the main fighting appeared over by Saturday afternoon.

Shiite leaders, joined by a U.N. official, met with aides to militant Shiite cleric Muqtada al-Sadr, whose militia was involved in the fighting, in an effort to mediate an end to the violence.

But CBS News Correspondent Kimberly Dozier reported Saturday from Baghdad that some religious and government officials there fear al Sadr has created a monster he can no longer control. And that his fighters may turn on him, too, if they think he is cooperating with the new Iraqi government, or the Americans.

And the amnesty was rejected immediately by al-Sadr. "This is a trivial and insignificant statement," said al-Sadr aide Ahmed al-Shaibany. "Amnesties are for criminals, but resistance is legitimate and does not need an amnesty."