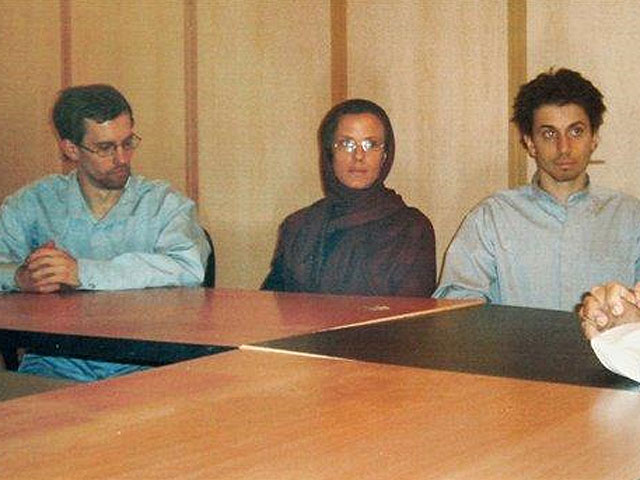 Shane Bauer and Josh Fattal have been held since July 2009 after being taken into custody on the Iran-Iraq border. A third American who was taken with them, Sarah Shourd, was released in September on $500,000 bail and returned to the United States. She is being tried in absentia.

Bauer and Fattal, who are both 28, remain in jail. The three claim they were hiking in Iraq's northern Kurdish region and any crossing into Iran was inadvertent.

A Swiss diplomat representing the United States' interests in Iran told CBS News of the postponement, saying that the Iranian regime was "just not ready to take a decision." The diplomat asked to remain anonymous.

The hikers' Iranian attorney, Masoud Shafiei, confirmed the delay, telling The Associated Press that Iranian officials had given no immediate explanation.

The trial opened on Feb. 6 and was to have resumed on Wednesday.

Initially, Tehran accused the three Americans only of illegally crossing into Iran but later added espionage charges. Authorities have given few details to support the accusations.

Tehran's chief prosecutor, Abbas Jafari Dowlatabadi, has claimed, without elaborating, that the Americans had "equipment and documents and received training."

Shafiei says his clients deny the allegations and maintain any crossing into Iran was inadvertent. Shourd, 32, from Oakland, California, was ordered back to Tehran for the trial by Iranian officials but she has said she won't return.

Shourd told The Associated Press Wednesday that the families of Bauer and Fattal are "devastated" that the two were not brought to court. Shourd and Bauer are engaged.

Shafiei also said he was worried about his clients' health and the court's failure to hold the proceedings Wednesday.

"My clients are in custody of judiciary officials but they were not brought into court," he told the AP. "The trial date had been fixed a long time ago. There is no justification for the postponement."

The lawyer said he has not been allowed to see Bauer and Fattal since the February date of the trial's opening.

"I've demanded to be allowed to meet my clients several times," he said, adding that although his request for a meeting was never officially denied, the authorities "never let it happen."

The spying charges could bring a maximum sentence of 10 years.

The U.S. government has denied the charges against them and demanded their release. Their lengthy detention has added to tensions between the two nations over issues like Iran's disputed nuclear program.

The three Americans are graduates of the University of California at Berkeley.

Shourd and Bauer had been living together in Damascus, Syria, where Bauer was working as a freelance journalist and Shourd as an English teacher. Fattal, an environmental activist, went to visit them in July 2009 shortly before their trip to Iraq.

Bauer is a native of Onamia, Minnesota, and Fattal grew up in Pennsylvania.