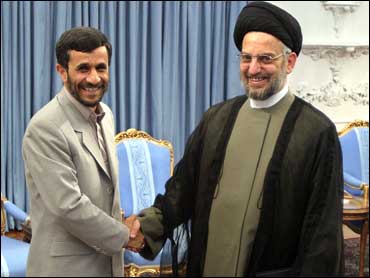 President Mahmoud Ahmadinejad said Wednesday that his country will respond in mid-August to the package of incentives on its nuclear program offered by the West.

"We are studying the proposals. Hopefully, we will present our views about the package by mid-August," Ahmadinejad told a crowd in western Iran in a speech broadcast live on state television.

The offer, presented by European Union foreign policy chief Javier Solana during a June 6 visit, provides a range of incentives for Iran to impose a moratorium on uranium enrichment, a process that can produce material for nuclear generators or for weapons.

President Bush accused Iran of dragging its feet on a Western incentive package aimed at getting Tehran to suspend uranium enrichment activity.

"We'll come to the table when they verifiably suspend. Period," Mr. Bush said at an annual U.S.-European Union summit.

He said that the mid-August timetable "seems like an awfully long time" to wait for an answer. "It shouldn't take the Iranians that long to analyze what's a reasonable deal," Mr. Bush said.

Austrian Chancellor Wolfgang Schuessel stressed U.S.-European cooperation in various areas, including the efforts to persuade Iran to give up its nuclear ambitions.

"Iran has to make the right choice," Schuessel said, adding that the European community welcomes U.S. involvement, particularly the recent historic signal that the United States is ready to join negotiations if Iran suspends enrichment activities.

If Iran rejects the deal, President Bush previously warned that it can expect U.N. Security Council action and progressively stronger political and economic sanctions. The U.S. and Europe are pressing for a quick answer.

If Iran accepts the package, it has to suspend its uranium enrichment entirely before the six powers will start negotiations on a framework for its nuclear program.

Such a step would be politically difficult. Since Iran resumed enrichment this year after a three-year suspension, Ahmadinejad has repeatedly vowed never to halt it again.

Javier Solana, the EU's foreign and security affairs chief, said there was not much room for talk anymore, two weeks after he put the package on the table in Tehran.

He called for a rapid decision.

"We expect a response in the coming days," Solana said in an interview with The Associated Press as Mr. Bush arrived at the Hofburg complex, a vast former imperial palace, in the historic center of Vienna.

Iran was one topic in discussions Mr. Bush and Secretary of State Condoleezza Rice were having with a delegation of senior EU officials, led by Schuessel, whose country now holds the EU presidency.

Speaking Wednesday, Mr. Bush called for a "common diplomatic front" to compel Iran to give up its nuclear ambitions.

Solana said the Iranian leaders he has spoken with are "no doubt ... aware of the responsibility they have" in coming to a negotiated solution.

Given the gravity of the situation and Tehran's isolation, Solana said it was natural Iranian leaders must "think very carefully what decision to take. I hope that they will not make a mistake."

Acting on behalf of the five permanent members of the U.N. Security Council, the United States, France, Britain, Russia and China, plus Germany, he has been to the international community's point man to get Iran to drop the secrecy over its nuclear activities.

For that to happen, the EU has put together a package of economic incentives.

"Messages go back and forth," Solana said. He said Tehran has "to take a decision rapidly. There is not much time left for discussion."

Indicative of the sensitive nature of Solana's dealings with Iran, a nine-page draft summit declaration contained no mention yet of Iran, when Bush arrived in Vienna Tuesday evening.

The international community will not back down from their demand that Tehran suspend uranium enrichment, Mr. Bush said Monday in a town outside New York City.

"Iran's leaders have a clear choice. We hope they will accept our offer and voluntarily suspend these activities so we can work out an agreement that will bring Iran real benefits," he said.

Iran has accused the United States of trying to sway European nations from a possible compromise. The Iranian foreign ministry said U.S. insistence that negotiations be conditioned on Tehran's suspension of uranium enrichment has narrowed the scope of possible solutions, and made it more difficult for all parties to reach an accord.

But Mr. Bush has continued to make it clear he would not budge. He said allowing Iran to enrich uranium, a process that can make nuclear fuel for a power plant or fissile material for an atomic bomb, would present a grave threat to the world.

Iran has said its nuclear program is designed to generate power.