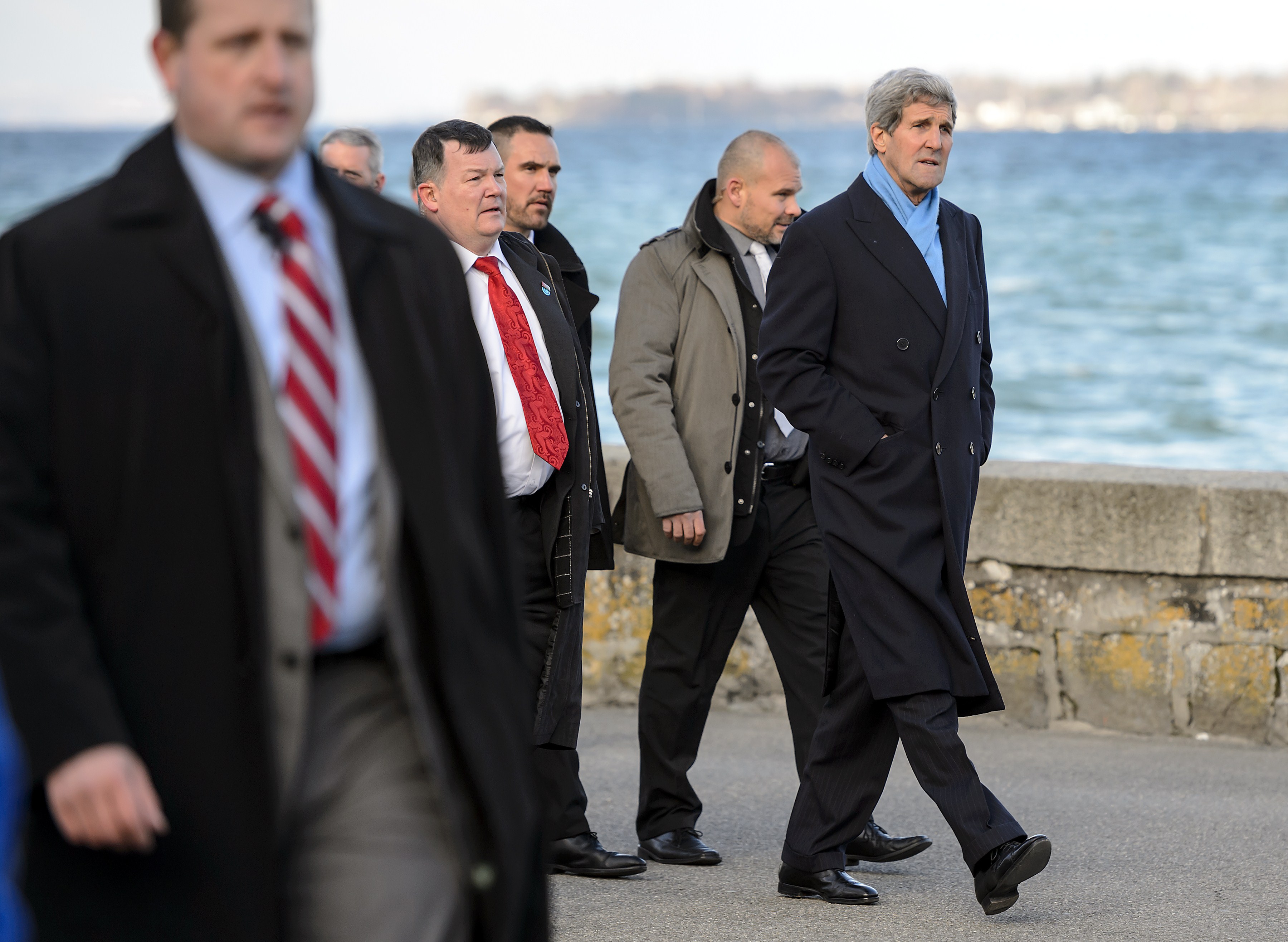 GENEVA - Edging toward a historic compromise, the U.S. and Iran reported progress Monday on a deal that would clamp down on Tehran's nuclear activities for at least 10 years but then slowly ease restrictions on programs that could be used to make atomic arms.

Officials said there were still obstacles to overcome before a March 31 deadline, and any deal will face harsh opposition in both countries. It also would be sure to further strain already-tense U.S. relations with Israel, whose leaders oppose any agreement that doesn't end Iran's nuclear ambitions.

Israeli Prime Minister Benjamin Netanyahu is expected to strongly criticize the deal in an address before Congress next week.

Still, a comprehensive pact could ease 35 years of U.S-Iranian enmity - and seems within reach for the first time in more than a decade of negotiations.

"We made progress," U.S. Secretary of State John Kerry said as he bade farewell to members of the American delegation at the table with Iran. More discussions between Iran and the six nations engaging it were set for next Monday, a senior U.S. official said.

Western officials familiar with the talks cited movement but also described the discussions as a moving target, meaning changes in any one area would have repercussions for other parts of the negotiation.

The core idea would be to reward Iran for good behavior over the last years of any agreement, gradually lifting constraints on its uranium enrichment and slowly easing economic sanctions.

Iran says it does not want nuclear arms and needs enrichment only for energy, medical and scientific purposes, but the U.S. fears Tehran could re-engineer the program to produce the fissile core of a nuclear weapon.

The U.S. initially sought restrictions lasting up to 20 years; Iran has pushed for less than a decade. The prospective deal appears to be somewhere in the middle.

One variation being discussed would place at least a 10-year regime of strict controls on Iran's uranium enrichment. If Iran complied, the restrictions would be gradually lifted over the final five years.

One issue critics are certain to focus on: Once the deal expired, Iran could theoretically ramp up enrichment to whatever level it wanted.

Experts say Iran already could produce the equivalent of one weapon's worth of enriched uranium with its present operating 10,000 centrifuges. Several officials spoke of 6,500 centrifuges as a potential point of compromise, with the U.S. trying to restrict them to Iran's mainstay IR-1 model instead of more advanced machines.

However, Iran's supreme leader, Ayatollah Ali Khamenei, said last year that his country needed to increase its output equivalent to at least 190,000 of its present-day centrifuges.

Under a possible agreement, Iran also would be forced to ship out most of the enriched uranium it produced or change it to a form that would be difficult to convert for weapons use. It takes about one ton of low-enriched uranium to process into a nuclear weapon, and officials said that Tehran could be restricted to an enriched stockpile of no more than about 700 pounds.

The officials represent different countries among the six world powers negotiating with Iran - the United States, Britain, China, France, Germany and Russia. They spoke on condition of anonymity because they were not authorized to talk publicly about the negotiations.

Formal relations between the U.S. and Iran, severed during the Iranian revolution and hostage crisis in 1979, have progressively improved since moderate Iranian President Hassan Rouhani took office in 2013. Further reconciliation would help the West in a region where Iran holds considerable sway and the U.S. is increasingly involved in the struggle against Islamic extremists.

But even if the two sides agree to a preliminary deal in March and a follow-up pact in June, such a two-phase arrangement will face fierce criticism from Congress and Israel, both of which will argue it fails to significantly curb Tehran's nuclear weapons potential.

Israel was already weighing in.

Defense Minister Moshe Yaalon warned that such a deal would represent "a great danger" to the Western world and said it "will allow Iran to become a nuclear threshold state."

In Washington, President Barack Obama has been trying to keep Congress from passing new sanctions against Iran that he says could scuttle further diplomacy and rekindle the threat of a new Mideast war.

Iranian hardliners fearing a sellout of their country's nuclear program may also pressure Rouhani, although he appears secure as long as a deal is supported by Khamenei.

The U.N's International Atomic Energy Agency would have responsibility for monitoring, and any deal would depend on technical safeguards rather than Iranian guarantees.

The IAEA already is monitoring Iranian compliance with an interim agreement that came into force a year ago and has given Tehran good marks. Separately, it also oversees Tehran's nuclear programs to ensure they remain peaceful.

Its attempts to follow up on suspicions that Iran once worked on nuclear arms are deadlocked however, with Iran saying such allegations are based on phony evidence from the U.S. and Israel.

That stalled probe and other issues that the U.S. says must be part of any final deal could remain unresolved by June, opening any agreement to further criticism.

For the United States, the goal is to extend to at least a year the period that Iran would need to surreptitiously "break out" toward nuclear weapons development. Daryl Kimball of the Washington-based Arms Control Association said that with the IAEA's additional monitoring, the deal taking shape leaves "more than enough time to detect and disrupt any effort to pursue nuclear weapons in the future."

In exchange, Iran wants relief from sanctions crippling its economy and the U.S. is talking about phasing in such measures.