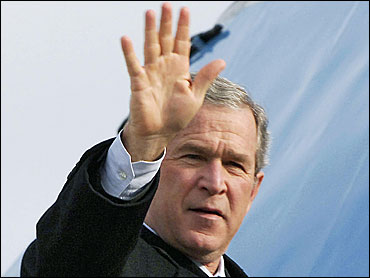 
In traveling to Austria and Hungary this week, President Bush is making his 33rd foreign trip since taking office.

Our CBS News tally of his travels abroad shows that this journey brings to 56 the number of foreign countries Mr. Bush has visited during his presidency. (See list.)

In Vienna, he'll attend the biannual U.S. summit with leaders of the European Union. In Budapest, he'll join in ceremonies commemorating the 50th anniversary of the 1956 Hungarian revolution against Soviet domination.

"The trip is an opportunity to reaffirm the strong relationship between the United States and the European Union," says White House National Security Adviser Steve Hadley.

Topping the agenda is the showdown with Iran. Mr. Bush will reaffirm American support for joint efforts with the European Union to get the Iranian government to foreswear enrichment of uranium, which the United States and its allies fear could be used for nuclear weapons.

Neither Austria nor Hungary has been a frequent destination for U.S. presidents.

Not since Jimmy Carter in 1979 has an American chief executive set foot in Austria. Back then, Vienna was the site of a summit with then-Soviet President Leonid Brezhnev at which the two leaders signed a Strategic Arms Limitation Treaty.

Only two previous U.S. presidents have visited Hungary: George H. W. Bush in 1989 and Bill Clinton in 1994 and 1996. The second visit was a brief drop-by to a muddy staging area in Taszar for U.S. troops bound for peacekeeping duty in Bosnia.

As a foreign traveler, President Bush is keeping pace with his predecessors. He's not far behind the record set by President Clinton, who made 55 foreign trips to 72 nations during his eight years in office.

As he approaches the midpoint of his sixth year in office, Mr. Bush is making his 33rd foreign trip to 56 countries.

Unlike Mr. Clinton, President Bush is not one to linger. By nature, he is not given to sightseeing, though he will occasionally visit famous landmarks to avoid offending his hosts.

As part of the U.S.-European Union summit in Vienna on Wednesday, Mr. Bush will tour the historic National Library and attend a performance by the Vienna Boys Choir.