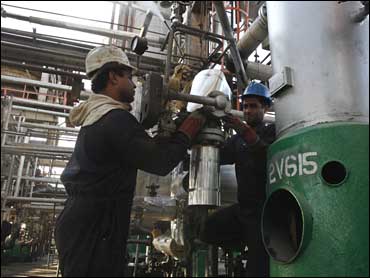 Iran has dramatically reduced dependence on the dollar over the past year in the face of increasing U.S. pressure on its financial system and the fall in the value of the American currency.

Oil is priced in U.S. dollars on the world market, and the currency's depreciation has concerned producers because it has contributed to rising crude prices and eroded the value of their dollar reserves.

"The dollar has totally been removed from Iran's oil transactions," Oil Ministry official Hojjatollah Ghanimifard told state-run television Wednesday. "We have agreed with all of our crude oil customers to do our transactions in non-dollar currencies."

Iranian President Mahmoud Ahmadinejad called the depreciating dollar a "worthless piece of paper" at a rare summit last year in Saudi Arabia attended by state leaders from the Organization of Petroleum Exporting Countries.

Iran put pressure on other OPEC countries at the meeting to price oil in a basket of currencies, but it has not been able to generate support from fellow members — many of whom, including Saudi Arabia, are staunch U.S. allies.

Iran has a tense relationship with the U.S., which has accused Tehran of using its nuclear program as a cover for weapons development and providing support to Shiite militants in Iraq that are killing American troops. Iran has denied the allegations.

Iranian oil officials have said previously that they were shifting oil sales out of the dollar into other currencies, but Ghanimifard indicated Wednesday that all of Iran's oil transactions were now conducted in either euros or yen.

"In Europe, Iran's oil is sold in euros, but both euros and yen are paid for Iranian crude in Asia," said Ghanimifard.

Iran's central bank has also been reducing its foreign reserves denominated in U.S. dollars, motivated by the falling value of the greenback and U.S. attempts to make it difficult for Iran to conduct dollar transactions.

U.S. banks are prohibited from conducting business directly with Iran, and many European banks have curbed their dealings with the country over the past year under pressure from Washington.

However, the U.S. has been wary of targeting Iran's oil industry directly, apparently worried that such a move could drive up crude prices that are already at record levels.

Iranian analysts say Tehran can withstand U.S. pressure as long as it can continue its oil and gas sales, which constitute most of the country's US$80 billion in exports.