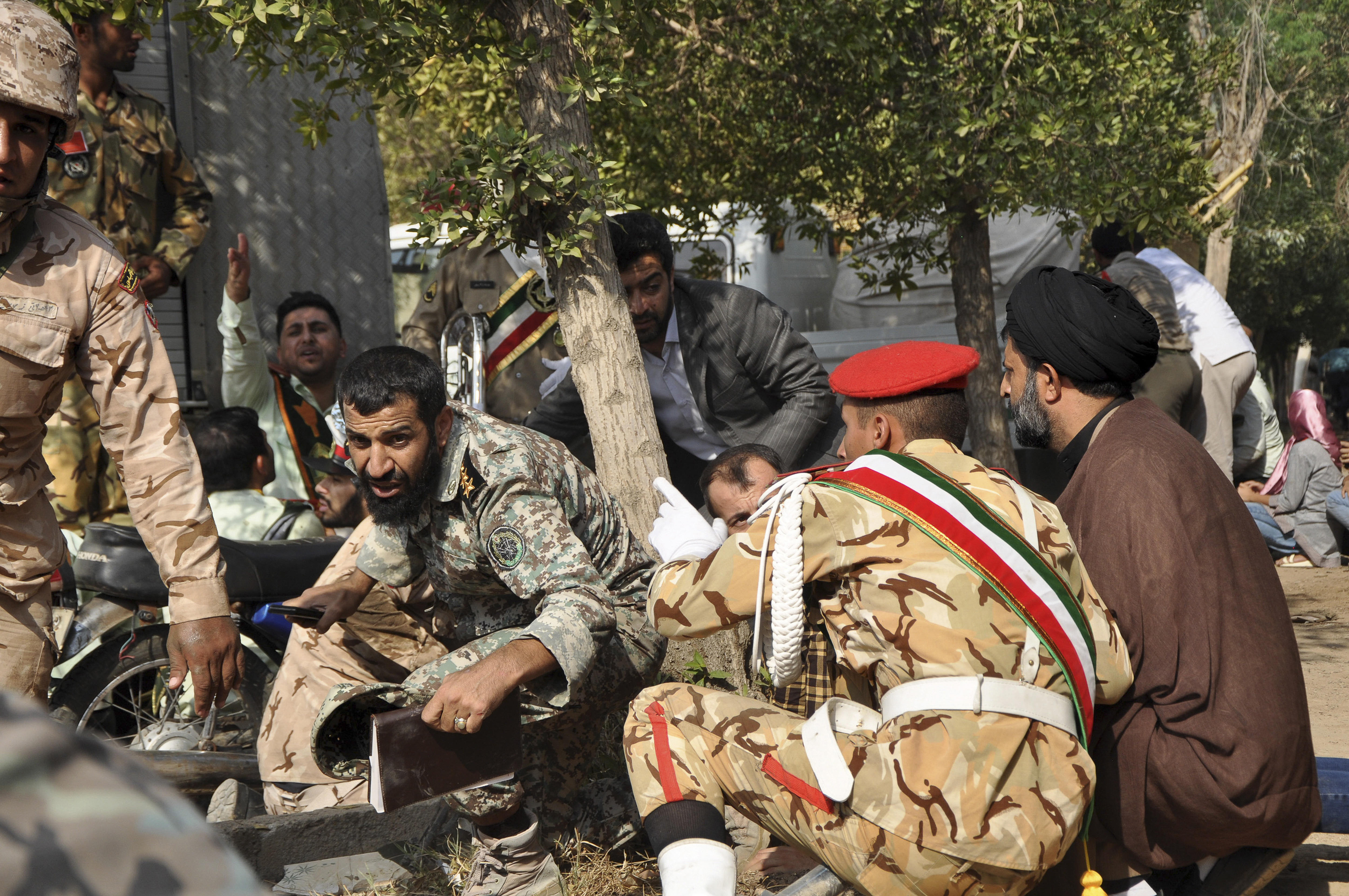 TEHRAN, Iran -- Gunmen disguised as soldiers attacked an annual Iranian military parade Saturday in the country's oil-rich southwest, killing at least 25 people and wounding 53 in the bloodiest assault to strike the country in recent years. The attack in Ahvaz saw gunfire sprayed into a crowd of marching Revolutionary Guardsmen, bystanders and government officials watching from a nearby riser.

Suspicion immediately fell on the region's Arab separatists, who previously only attacked unguarded oil pipelines under the cover of darkness.

Iran's Foreign Minister Mohammad Javad Zarif immediately blamed the attack on regional countries and their "U.S. masters," calling the gunmen "terrorists recruited, trained armed and paid" by foreign powers. That further raises tensions in the Mideast as Tehran's nuclear deal with world powers is in jeopardy after President Donald Trump withdrew America from the accord.

"Iran will respond swiftly and decisively in defense of Iranian lives," Zarif wrote on Twitter.

The attack came as rows of Revolutionary Guardsmen marched down Ahvaz's Quds, or Jerusalem, Boulevard, which like many other places around the country saw an annual parade marking the start of Iran's long 1980s war with Iraq. Images captured by state television showed journalists and onlookers turn to look toward the first shots, then the rows of marchers broke as soldiers and civilians sought cover under sustained gunfire.

"Oh God! Go go go! Lie down! Lie down!" one man screamed as a woman fled with her baby.

In the aftermath, paramedics tended to the wounded as soldiers, some bloodied in their dress uniforms, helped their comrades to ambulances.

"We suddenly realized that some armed people wearing fake military outfits started attacking the comrades from behind (the stage) and then opened fire on women and children," an unnamed wounded soldier told state TV. "They were just aimlessly shooting around and did not have a specific target."

Details about the attack remained unclear immediately afterward. The semi-official Fars news agency, which is close to the Guard, meanwhile said two gunmen on a motorcycle wearing khaki uniforms carried out the attack.

Khuzestan Gov. Gholamreza Shariati told IRNA that two gunmen were killed and two others were arrested.

State TV hours later reported that all four gunmen had been killed, with three dying during the attack and one later succumbing to his wounds at a hospital.

Who carried out the assault also remained in question. State television immediately described the assailants as "takfiri gunmen," a term previously used to describe the Islamic State group. Iran has been deeply involved in the fight against IS in Iraq and has aided embattled Syrian President Bashar Assad in his country's long war.

But in the hours following the attack, state media and government officials seemed to come to the consensus that Arab separatists in the region were responsible. The separatists, however, previously only conducted pipeline bombings at night or hit-and-run attacks.

The separatists accuse Iran's Shiite theocracy of discriminating against its Sunni Arab citizens. Iran has blamed its Mideast archrival, the Sunni kingdom of Saudi Arabia, for funding their activity. State media in Saudi Arabia did not immediately acknowledge the attack.

The Islamic State of Iraq and Syria (ISIS) later claimed responsibility in a message on its Amaaq news agency, but provided no evidence it carried out the assault. The militants have made a string of false claims in the wake of major defeats in Iraq and Syria.

In Tehran, Iranian President Hassan Rouhani watched a military parade that included ballistic missiles capable of reaching Israel and U.S. military bases in the Mideast. Rouhani said the U.S. withdraw from the nuclear deal was an attempt to get Iran to give up its military arsenal.

Saturday's attack comes after a coordinated June 7, 2017, ISIS assault on parliament and the shrine of Ayatollah Ruhollah Khomeini in Tehran. At least 18 people were killed and more than 50 wounded.

Khomeini led the 1979 Islamic Revolution that toppled the Western-backed shah to become Iran's first supreme leader until his death in 1989. The assault shocked Tehran, which largely has avoided militant attacks in the decades after the tumult surrounding the Islamic Revolution.

In the last decade, such attacks have been incredibly rare. In 2009 more than 40 people, including six Guard commanders, were killed in a suicide attack by Sunni extremists in Iran's Sistan and Baluchistan province.