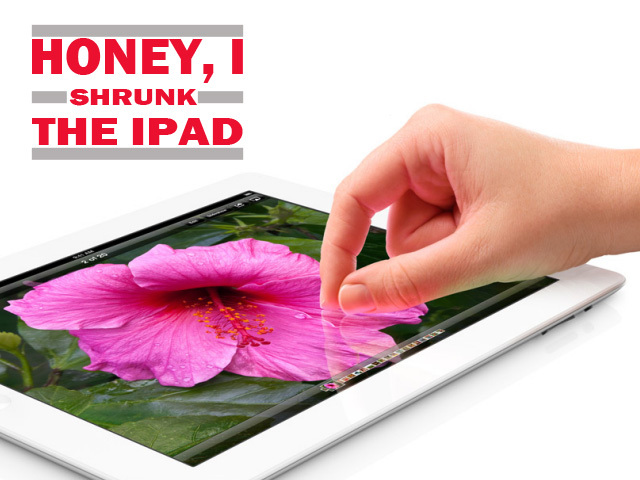 (MoneyWatch) There have been rumors that an Apple (AAPL) press event next week will be to introduce a new smaller screen iPad. And now the Wall Street Journal reports that such a device is in full production, probably with a 7.85-inch screen with lower resolution than the current iPad offers.

The question is, why? Not that long ago, Steve Jobs dismissed the idea of a tablet with a smaller screen. Maybe it was misdirection. Or it could be that Apple is simply reacting to competition -- the company might need a new offering to protect its lead in tablets.

Had Jobs planned it all along?

There was a history of Jobs misdirecting and even outright lying about his strategic intents. He certainly was capable of twisting competitive facts during a presentation.

According to Jason Calcanis, Jobs claimed that no one wanted to watch video on an iPod just a few months before the feature was publicly announced. Jobs pretended that television was only a "hobby" for Apple, even though Walter Isaacson's biography makes clear that he had seriously pursued a full Apple TV and thought he had "finally cracked" the problem.

Jobs denied that Apple was working on a tablet a year after it had already created prototypes. So, it's perfectly believable that Jobs had every intention of moving into a smaller screen size.

Whether or not Job's comments were misdirection, the company faces ever fiercer competition. Android smartphones collectively outsell the iPhone, and there is evidence that Samsung alone sells more units than Apple.

Apple does not want to lose control of the tablet market, and so far it has been able to hold its domination on the full-sized tablet front. But it faces danger both from the incessant push by Android vendors to develop popular tablets and from Microsoft, which could see a boost in popularity when Windows 8 becomes available on tablets. And the one front on which Apple has defenses is in smaller tablets.

Both Amazon (AMZN) and Google (GOOG) have gained a lot of attention for their smaller screen tablets, which  are available for $159 to $199 -- hundreds less than Apple's entry price of $499 for the newest iPad model, or even the $399 bottom-end price tag for the older iPad 2.

Apple would make less money on a smaller iPad and probably see some erosion of its margins, which wouldn't please investors. But there's a trade-off. One of Apple's massive competitive advantages is the sense among developers that all software and other content need to be on the iPad. That dominance becomes part of a self-fulfilling prophesy, as consumers consider an iPad first because they're likely to find that everything they want is available on it.

Enough volume of lower-priced tablets could upend that assumption. Break the close tie between content and the iPad, and choosing Apple isn't a foregone conclusion, particularly when someone could pay half as much or less for another device.

And so, Apple must come out with a smaller tablet. It's the old business story of Apple being willing to cannibalize its own sales so that a competitor can't.

There's a secondary benefit to Apple as well. It looks as though the TV business might not be easy to disrupt after all. Without a new approach to television as a business venture, Apple will need something else to offer the continued high growth that Wall Street has come to expect.