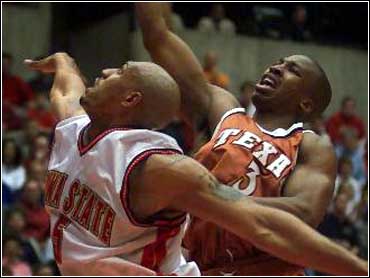 The most valuable player in the Big 12 Conference? Iowa State's Michael Nurse has no doubt: teammate Marcus Fizer.

"I think he might have showed that tonight," Nurse said after Fizer scored a career-high 35 points in No. 17 Iowa State's 89-77 victory over 14th-ranked Texas on Tuesday night.

With Fizer making one huge play after another, Iowa State (23-4, 11-2 Big 12) broke down a team that had allowed an average of just 55 points in its five previous games and pulled into a tie with Oklahoma State for first place in the league with three games to play.

Texas (19-7, 10-3), unable to hold a 14-point lead against the smaller, quicker Cyclones, dropped one game back in the league race.

"I don't know what you'd label this group of ours, but they're special in my mind and they really battled, they accepted the challenge," Iowa State coach Larry Eustachy said.

"I thought once we started getting to their perimeter guys and contesting shots and making it difficult for them to throw it inside that was our game plan and once we got our game plan on the court, we took advantage of it."

Nurse added 20 points for Iowa State, which trailed 8-0 and was down 26-12 before taking the lead for good at 38-37 on Jamaal Tinsley's 3-pointer at the halftime buzzer.

Tinsley and Stevie Johnson each scored 12 points, with Johnson getting all of his in the second half on 5-for-5 shooting.

This night, however, belonged to Fizer, who scored on drives, dunks and turnarounds and even made two 3-pointers. He also grabbed nine rebounds, handed out a career-high five assists, blocked two shots and made two steals.

The previous high for the 6-foot-8 junior, who missed his first four shots, had been 32 aainst Oklahoma State last season.

"I was disappointed in our post play," Texas coach Rick Barnes said. "Fizer is a big, strong guy, but so are our post men. Tonight, he got the best of us. His ability to score off the dribble is what really hurt."

Iowa State played the last half without its tallest player, 6-9 Paul Shirley, who broke his foot late in the first half. As a result, the Cyclones' starters played the entire second half except Fizer, who went out to a thunderous ovation with 7.3 seconds left.

With Shirley out, the 6-4 Johnson often had to guard Mihm, a 7-footer.

"It's one of the gutsiest performances this will be my 10th year as a head coach that I've ever had," Eustachy said. "We just really showed a lot of toughness."

Iowa State opened the second half with a 7-0 run five points by Johnson and a basket by Fizer on a drive against Mihm to go up 45-37. The Longhorns got no closer than five points after that.

Two straight 3-pointers by Nurse stretched the lead to 52-41 and Iowa State maintained a comfortable cushion until Texas drew to 66-61 on Mihm's reverse layup with 6:36 to play.

But Iowa State answered. The 6-4 Johnson slipped inside for a basket and Fizer beat Mihm off the dribble for another bucket to make it 70-61. The Cyclones then went into a four-corner setup with Tinsley running things to preserve the lead.

It grew to 79-65 when Fizer got the ball in the right corner, drove the baseline and jammed the ball through the hoop with 2:08 left. The Cyclones wrapped it up by making eight straight free throws.

As Fizer was at the line with 39.9 seconds left, the crowd chanted "One more year. One more year," a plea for him to return for his senior season instead of entering the NBA draft.

Fizer kept his concentration and made both shots.

The 89 points were the most scored against Texas this season. Arizona scored 88 on Dec. 4.

"It's tough to come in here and lose," Mihm said. "If we get another shot at Iowa State, that would be great, but if it doesn't happen, it doesn't happen. I played hard tonight and my shots felt good, but sometimes you have those nights."