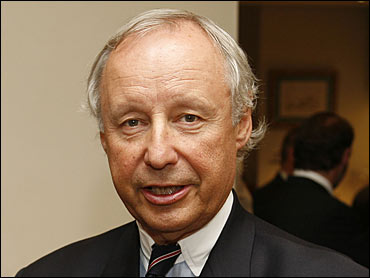 The suicide of a investor who lost more than $1 billion of his clients' money as a result Bernard Madoff's alleged ponzi scheme may be just the beginning, says a fellow hard-luck investor who predicted such incidents shortly after news of the scandal broke.

"It was kind of an easy prediction to make," Robert Chew, who lost $1.2 million in Madoff's fund, told CBS' The Early Show Wednesday. "I'm afraid that this is just the beginning of this kind of devastation and tragedy. It's just going to continue."

In a column Chew wrote for Time Magazine nine days ago, he said the scandal was "the kind of news that's been known to cause shortness of breath, sudden cardiac arrest, revolvers pulled from bedside drawers."

On Tuesday, the body of Rene-Thierry Magon de la Villehuchet was discovered in his Madison Avenue office after he apparently swallowed sleeping pills and slashed his wrists with a box cutter, police said.

The bloody scene marked a grisly turn in the Madoff scandal in which money managers and investors were ensnared in an alleged $50 billion Ponzi scheme. De la Villehuchet is believed to have lost about $1.4 billion to Madoff.

But de la Villehuchet was just one of many investors now facing severe losses to savings and retirement accounts.

"Mr. Madoff really sort of set off a financial neutron bomb here," said Chew. "[Investors are] sitting in their nice homes with their nice cars, with their nice artwork, but the reality is they only have two or three months of cash available and then it's over."

De la Villehuchet, 65, was an esteemed financier who tapped his upper-crust European connections to attract clients. It was not immediately clear how he knew Madoff or who his clients were.

Follow the Madoff Money Trail
A look at the people and institutions that have lost millions in the alleged Bernie Madoff Ponzi scheme.

He grew increasingly subdued after the Madoff scandal broke, drawing suspicion among janitors at his office Monday night when he demanded that they be out of there by 7 p.m.

A partner in the firm asked a security guard later in the evening to check and see if De La Villehuchet was still there, but the door was locked, Police Commissioner Raymond Kelly said.

When a guard came into the 22nd-story office suite the next morning, less than 13 hours later, the Frenchman was dead, Browne said. There were several cuts "to his arm, to his wrist and also to his bicep area," Kelly said.

His death came as swindled investors began looking for ways to recoup their losses. Funds that lost big to Madoff are also facing investor lawsuits and backlash for failing to properly vet Madoff and overlooking red flags that could have steered them away. It's not immediately known what kind of scrutiny de la Villehuchet was facing over his losses.