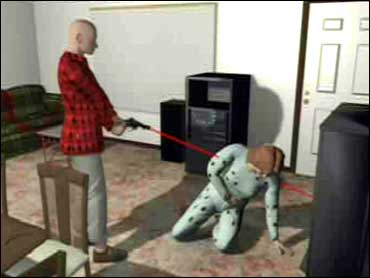 Investigators have a growing arsenal of tools when it comes to catching a killer.

But there's one new tool in particular that is literally bringing a new dimension to solving crime - although not everyone thinks justice is being served by it.

Correspondent Harold Dow reports on a ground-breaking case in Pennsylvania where debate is animated. This report was first broadcast last October.

Forensic animation is causing quite a stir in courtrooms around the country. And it has become the latest high-tech way to present evidence in criminal cases.

Defense attorney Joe D'Andrea claims a 72-second animation sent his client to prison for life. "There's no doubt that the animation was his demise," says D'Andrea. "It was fatal."

Serge was a decorated police detective with the Scranton police department. He was also an alcoholic with a history of domestic violence.

"It was just very hard to live in that house. It was very tense. You never knew when he was going to blow up," says his daughter Jennifer, who claims that on several occasions she had to break up fights between her mother and father.

On Jan. 15, 2001, Serge shot his wife Jennifer twice and called 911. He said that she had come at him with a knife, and that he had shot her in self-defense.

When police responded to his 911 call, they found Jennifer, his wife of 35 years, lying face down on the floor, dead. Serge was arrested and charged with murder. There was a knife on the floor next to the body, but prosecutors said the knife was planted after the murder.

"We didn't buy his defense that he had come at him in a threatening manner with a knife and he was protecting his own safety by shooting at her," says Jarabola.
To prove that in court, Jarabola would have to rely on forensic experts to analyze and interpret the physical evidence found at the crime scene. Knowing that jurors can often be confused by that type of testimony, he decided to try something that had never before been used in a criminal case in Pennsylvania: A 3-D animation of the shooting.

The raw data from the crime scene, and from photographs, was sent to 21st Century Animation in Dallas, where it was loaded into computers. Animators there worked closely with forensic investigators on the Serge case to craft the finished animation.

D'Andrea, however, argues that the animation is too realistic. "The faces were too humanlike. We would have rather stick figures," he says. "That's Jennifer Serge in the jurors mind, not a stick figure."

In fact, D'Andrea believes that the animation is so realistic and so dramatic that jurors easily forget that it's only a theory of what happened.

According to D'Andrea, the absence of blood in Jennifer's palm suggests that she was holding something when she was shot - namely, the knife. "We found what was considered high velocity blood spatter on both Jennifer Serge's hand, and on the knife," says D'Andrea. "But none in the palm of her hand."

The defense could have produced their own forensic animation portraying their theory. But D'Andrea says it was too expensive. The Serge animation cost approximately $15,000 to produce.

"The prosecution's budget was probably 10 to 20 folds ours in this," says D'Andrea. "That's the scary part of what prosecution is coming down to. Who's got the deeper pockets. Who could buy more. And who can create Hollywood productions."

The jury deliberated less than two hours before declaring Michael Serge guilty of first-degree murder. He was sentenced to life in prison without parole.

Jurors in the case, however, say the animation was very effective.

"If there was a doubt in your mind and you couldn't picture something, it would help give you a perspective on how to look at things differently," says juror Mary Jo Amendolaro.

While the jury may still be out on how useful a tool forensic animation really is, the Serge family is satisfied that justice was served in the end.

"I think he's a ruthless killer and he belongs where he is for the rest of his life," says Michael Serge, the son. "Now he'll suffer the way he made my mother suffer all these years."