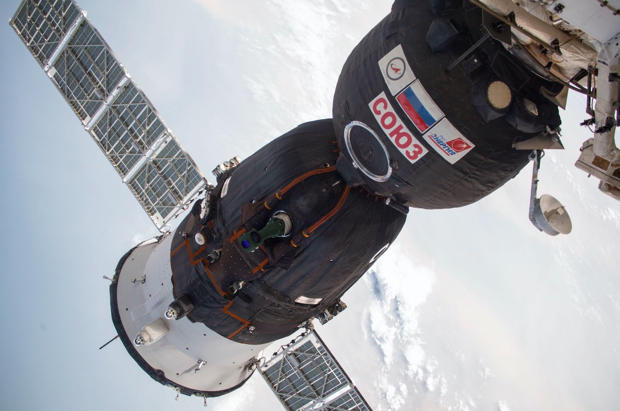 The International Space Station's crew used a cloth wipe saturated with epoxy to plug a small leak Thursday, stopping a slight loss of air. There was no immediate word on what might have caused the 2-millimeter-wide hole, but NASA officials said the crew was never in any danger.

The "tiny" leak was detected by on-board sensors Wednesday evening, a very slight decay in the station's atmospheric pressure that was not deemed serious enough to warrant waking the crew.

The cause of the leak was not discussed, prompting speculation a piece of space debris might have hit the ship or a spacecraft component might have broken on its own.

In any case, Kapton tape was initially placed over the hole, slowing the leak while engineers debated various repair options. In the end, Russian flight controllers radioed up instructions for the crew to saturate a gauze strip with a glue-like sealant and to push it as far as possible into the hole.

"First of all, take a gauze wipe, it should be semi-transparent, dab the sealant with it so it's saturated and then try to push the center of the wipe five, six millimeters deep," the ground called up in translated remarks.

The repair work was carried out by Prokopyev and cosmonaut Oleg Artemyev. When they were done, a sensitive microphone was no longer able to detect any sounds of a leak. But the cosmonauts were unsure what to do about a relatively large bubble that formed over the hole as the epoxy began hardening.

In the end, flight controllers told the crew to hold off additional repair work until Friday, giving engineers more time to evaluate options and giving the epoxy time to fully set, or harden.

"OK, we copy all," one of the cosmonauts replied. "The height of the protrusion is approximately 1 centimeter and 3 to 4 centimeters in diameter. We're afraid of touching it, to ruin the whole process."

"Yes, we agree with that," the ground replied. "We are not going to do anything else with it today. let it set and then tomorrow, we're going to run a leak check. We will proceed with further activities tomorrow."

"Just out of curiosity, I guess you should have seen a little bit of a leak rate while we worked on it, while Sergey and Oleg worked on it," Gerst radioed. "But now, it should have gone back to stable. We checked with ultrasonics and there was no signature once it was fixed. Let us know if you see anything to the contrary.""

The Houston flight control team confirmed "we're also seeing stable pressures down here for the time being on the ground."