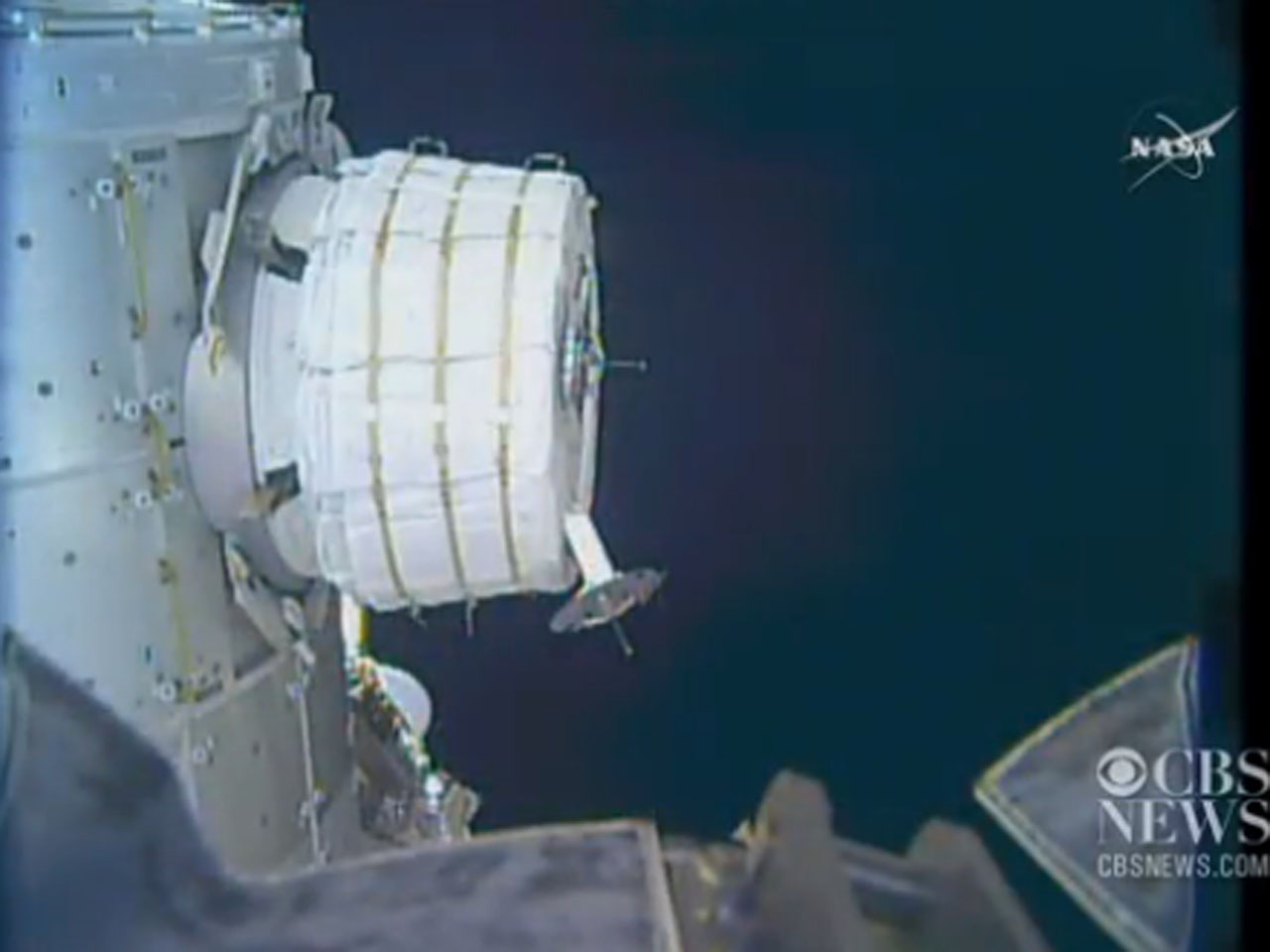 The International Space Station crew began the process Thursday of inflating an innovative expandable space module developed by a Las Vegas billionaire, but the inflation stalled and NASA called off efforts for the day.

The Bigelow Expandable Crew Activity Module, or BEAM, was supposed to grow six feet in length and three feet in diameter when it was expanded using internal tanks and station-supplied air. But in a blog post Thursday morning, NASA said that after several hours of attempts to introduce air into the module, BEAM had only expanded a few inches in both length and diameter. "Engineers are meeting to determine a forward course of action, with the possibility that another attempt could be made as early as Friday morning," the statement said.

Once it's expanded as planned, BEAM will be monitored over the next two years to determine the feasibility of using such "soft goods" crew compartments as habitats for astronauts on long voyages into deep space or as space station modules in Earth orbit or around the moon.

For this initial test, the station astronauts will only open the hatch and float inside a few times a year to collect data from a battery of instruments that will measure internal pressure, temperature, stresses and strains to determine how the module stands up to the radiation, vacuum and temperature extremes of low-Earth orbit.

At the end of the test period, NASA plans to jettison the BEAM, which will eventually fall into the atmosphere and burn up.

But for Robert Bigelow, the motel chain magnate and owner of Bigelow Aerospace, the data is the real prize. If the $17.8 million BEAM module holds up over the course of the test, Bigelow will be in a good position to market even larger modules for eventual use by NASA, traditional space contractors or entrepreneurs who envision government-sponsored or commercial space stations in Earth and lunar orbit.

"Successful BEAM demonstration on ISS will certainly be a giant stepping stone to understanding the role of inflatable structures for future space exploration habitats," according to a NASA project overview.

United Launch Alliance, builder of workhorse Atlas 5 rocket, has agreed to work with Bigelow Aerospace to launch a much larger inflatable module by 2020 that could be attached to the space station, adding 30 percent more volume, officials said shortly after BEAM's launching.

While that scenario would require extensive technical analysis, NASA-government concurrence and international agreements, the much larger, 12,000-cubic-foot Bigelow B330 module could be launched atop an Atlas 5 and operate on its own in low-Earth orbit as a stand-alone commercial space station.

Either way, the use of roomy, expandable modules could open the door to widespread commercialization on the high frontier, said Tory Bruno, CEO of Atlas-builder United Launch Alliance.

"We are standing on the very threshold of an expanded and permanent human presence beyond our planet," he told reporters earlier this month. "And the beachhead for that future, the foundation will be the commercialization of LEO (low-Earth orbit)."

Bruno said ULA was working with Bigelow to reserve an Atlas 5 launch slot around the end of the decade to boost a B330 into orbit. But all of that assumes the BEAM module now attached to the space station performs as expected.

The 3,100-pound BEAM compartment was launched in its compressed state, measuring seven feet long and 7.7 feet wide, aboard a SpaceX Dragon cargo ship on April 8. It was pulled out of the Dragon's unpressurized cargo "trunk" by the lab's robot arm eight days later and attached to the aft port of the station's Tranquility module.

Fully expanded, the BEAM was expected to maintain an internal air pressure between 11 and 15.2 pounds per square inch with a volume of some 565 cubic feet. The flight plan calls for the module to remain isolated for at least 80 hours to allow time for temperatures and pressure to stabilize after the fabric of the module stretches to its final form.

The astronauts will monitor internal pressure from the Tranquility module and only open the final hatch after engineers determine the compartment is stable and maintaining pressure. And even then, they only plan to float inside every now and then to collect sensor data. Most of the time, the hatch will remain closed.

The BEAM is not equipped with lights, heaters, communications gear or any other crew systems.

"We want to understand the structural integrity, the radiation performance of (the module) and the temperature controls in order to help inform our choices for deep space habitats," said Jason Crusan, director of NASA's Advanced Exploration Systems Division. "So we're going to do that over these two years."

Expandable modules offer a significant advantage over traditional solid-body compartments, taking up much less room atop a launch vehicle and allowing much roomier, lighter-weight modules to be launched than could otherwise be accommodated atop current rockets.