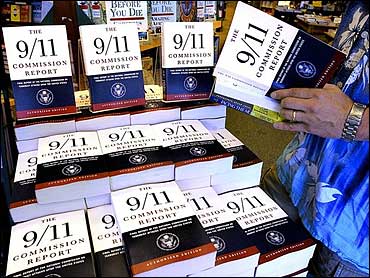 The Bush administration will address the recommendations of the Sept. 11 commission, but it is unclear "what reforms will be made and when," national security adviser Condoleezza Rice said Friday.

Citing failures across the federal government going back a number of years, the panel's final report(.pdf, 7MB) warned Americans that while post-Sept. 11 reforms have made the country safer, "We are not safe"

"Every expert with whom we spoke told us an attack of even greater magnitude is now possible and even probable," commission chairman Tom Kean said. "We do not have the luxury of time."

The report, released Thursday, did not blame any individuals, but did say Mr. Bush and Mr. Clinton both failed to make anti-terrorism a top priority.

The panel recommended the creation of a national counterterrorism center and a Cabinet-level national intelligence director to centralize efforts now spread over 15 agencies in six Cabinet departments, including the CIA.

Panelists vowed to make their unanimously backed reforms an election-year issue. Some family members have vowed to fight for the proposals to become policy.

"If these reforms are not the best that can be done for the American people, then the Congress and the president need to tell us what's better," Republican commissioner James Thompson, a former Illinois governor, said at a news conference Thursday.

"But if there is nothing better, they need to be enacted and enacted speedily, because if something bad happens while these recommendations are sitting there, the American people will quickly fix political responsibility for failure," he said.

But Congressional leaders have said the panel's recommendations are not likely to see legislative action this year.

The idea of a new national intelligence director has met with skepticism on Capitol Hill, where some key lawmakers are concerned that the position would create more bureaucracy and politicize the business of gathering and analyzing intelligence.

House Speaker Dennis Hastert, a Republican, expressed doubt that lawmakers would have time to consider a sweeping intelligence overhaul this year. Congress began it summer recess Friday and was scheduled to be out of session until early September.

"There are bad consequences to being in the middle of a political season and there are also good ones, because everyone who is running for office can be asked, 'Do you support these recommendations?'" she told reporters.

Relatives of Sept. 11 victims said they too would lobby.

"We're going to hold these people's feet to the fire," said Debra Burlingame, whose brother Charles was the pilot of the hijacked plane that struck the Pentagon.

Coming less than four months before the presidential election, the report could be trouble for Mr. Bush, who has made his handling of terrorism the centerpiece of his campaign and has insisted he fully understood the threat.

Mr. Bush welcomed the commission's recommendations as "very constructive" although his administration has reacted coolly toward a key proposal to establish a Cabinet-level national intelligence director. He said that "where government needs to act, we will."

Mr. Bush had opposed the creation of the commission, resisted the release of some documents and fought against letting Rice, testify publicly under oath. Still Kean thanked the president for allowing "unprecedented access to documents and cooperation from your administration."

The commission identified nine "specific points of vulnerability" in the Sept. 11 plot that might have led to its disruption had the government been better organized and more watchful. Despite these opportunities, "we cannot know whether any single step or series of steps would have defeated" the hijackers, the report concluded.

The report portrayed the Sept. 11 terrorists as sure-footed and determined while the nation they were preparing to strike was unprepared, sluggish and uncomprehending of the imminent danger.

"Across the government, there were failures of imagination, policy, capabilities and management," the commission concluded.

The Sept. 11 commission also concluded that passengers aboard United Airlines Flight 93 fought back against the hijackers but never actually made it into the cockpit. As passengers apparently tried to break down the cockpit door, the terrorist pilot seems to have decided to fly the plane into the ground.

He asked his fellow hijacker "Is that it? I mean, shall we put it down?"

Roughly 90 seconds later, the jet rolled onto its back and crashed into a Pennsylvania field at more than 580 mph killing everyone aboard.