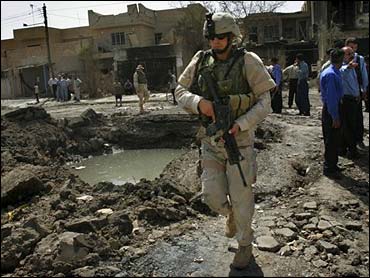 Iraq's insurgency appeared unfazed by two massive U.S.-Iraqi military offensives against militant smuggling routes and training centers west and north of Baghdad, mounting attacks that have killed at least 75 in the past two days — including 30 people on Monday.

The bomber in Irbil was wearing a police uniform when he slammed his car into a gathering of some 200 traffic officers during morning roll call in a courtyard behind the headquarters at 8 a.m., police Lt. Sulaiman Mohammed said.

At least 20 died and 100 were wounded, said Dr. Mohammed Ali of Irbil Hospital.

The attack occurred on a main street that leads to the oil-rich northern Iraqi city of Kirkuk, which is 50 miles south of Irbil, police said.

Irbil, one of two major cities in Iraq's northern Kurdish region, has enjoyed autonomous rule under Western protection since 1991. The area has been largely sheltered from the incessant violence wracking the remainder of Iraq, but has seen several major bombings blamed on militant Muslim groups.

The attack came a day after a suicide bomber walked into a crowded Baghdad kebab restaurant near the heavily fortified main gate of U.S. and Iraqi government headquarters at the Green Zone, killing at least 23 people — the deadliest attack in the capital in just over six weeks. A total of 45 people were killed in insurgent assaults throughout the country on Sunday.

Most of the suicide attackers are thought to belong to extremist groups such as al Qaeda in Iraq, which has justified killing other Muslims, including women and children, in their quest to destabilize the Shiite-led government of Prime Minister Ibrahim al-Jaafari.

The rate of insurgent attacks has risen dramatically since al-Jaafari announced his Cabinet on April 28. At least 1,182 people have been killed since then, according to an Associated Press count of police, military and hospital reports.

Some extremists have also started threatening fellow Sunni Arabs, who make up the insurgency's core, because some leaders of the minority Muslim sect have expressed a readiness to join the political process. Most Sunnis boycotted January's historic election.

On Monday, Sunni Arabs were expected to name their representatives to a committee that has until mid-August to draft Iraq's new constitution. The number of Sunni members took weeks to negotiate with the Shiite majority.

At least one American has died since the new military campaigns — code-named Spear and Dagger — began Friday and Saturday, respectively, in Anbar province. About 1,000 U.S. and Iraqi forces are taking part in each offensive.

Operations Spear and Dagger are aimed at destroying militant networks near the Syrian border and north of Baghdad, the military said. About 60 insurgents have been killed and 100 captured so far.

Troops on the ground said they found numerous foreign passports and one round trip air ticket from Tripoli, Libya, to Damascus, Syria. They found two passports from Sudan, two from Saudi Arabia, two from Libya, two from Algeria and one from Tunisia.

Intelligence officials believe Anbar province is a portal for extremist groups, including Abu Musab al-Zarqawi's al Qaeda in Iraq, to smuggle in foreign fighters. Syria is under intense pressure from Washington and Baghdad to tighten control of its porous 380-mile border with Iraq.

Operation Spear appeared to be winding down and U.S. Marines reported finding a weapons cache in the town of Karabilah early Monday, including two dozen RPG launchers, heavy machine guns and equipment to make up to 25 bombs.

The dusty town is about 200 miles west of Baghdad and near Qaim, a city on the Syrian border.

Troops also found a large number of explosives in the building and conducted a controlled blast, leveling an entire block, according to an AP reporter in the town. Many residents had already left their homes for safer areas and portions of the town have been reduced to rubble.