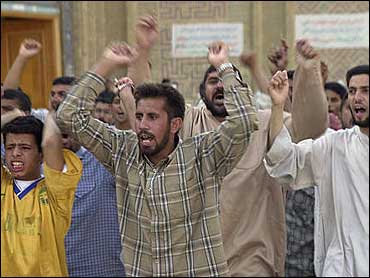 A day after President Bush outlined his plans for handing power to Iraqis in a few weeks' time, the obstacles to an orderly transition were apparent as insurgents mounted bomb and rocket attacks in Baghdad.

Militants fired rockets from the window of an apartment building toward a police station and a hotel, setting off thunderous explosions and wounding one American soldier.

A car bomb near a hotel wounded at least five Iraqis, the U.S. military said. The target of the blast, about 100 yards from the Australian Embassy, was not immediately clear.

Elsewhere, a bomb stopped the flow of Iraqi oil to a key export terminal in Turkey, and insurgents bombed a bridge in Numaniya, destroying part of it and disrupting traffic. Clashes in Najaf between U.S. forces and radical Shiite militiamen killed at least 13 Iraqis, and damaged a key Shiite shrine.

With only weeks before the June 30 deadline when U.S. occupation forces hand over limited power to an interim government in Baghdad, Iraqi Planning Minister Mehdi Hafedh acknowledged at a conference of international donors that, "security is, without doubt, the most significant challenge currently facing Iraq."

"The violence is clearly a serious impediment to progress and development in Iraq on every front," he told the conference. "It depresses economic activity and increases the cost."