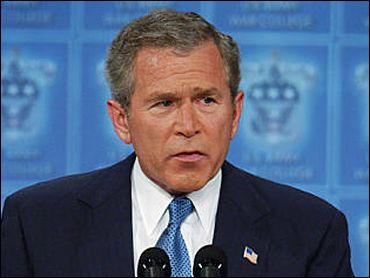 President Bush is urging Americans and Iraqis alike to follow what he envisions is a path toward a stable, peaceful Iraq. But events out of his control could frustrate his five-step plan in coming weeks, and he acknowledges "difficult days ahead."

The president, speaking at the Army War College in Carlisle, Pa., offered no exit strategy for bringing 138,000 American soldiers home, pledging instead to send more, if necessary.

"Terrorists will not determine the future of Iraq," Bush declared.

In the speech Monday night, he promised that Abu Ghraib prison, notorious for torture under Saddam Hussein and scene of prisoner abuse by U.S. troops, will be destroyed "as a fitting symbol of Iraq's new beginning."

Mr. Bush, aiming his remarks at audiences both at home and abroad, was trying to reverse growing doubts about the war, doubts that have dragged his approval ratings to the lowest point in his presidency. A new CBS News poll shows 61 percent of Americans disapprove of the president's handling of Iraq.

That state of affairs has undercut what his political advisers viewed as a strength heading into the election five months from now: his leadership in combating terrorism.

Democratic rival John Kerry said Mr. Bush's speech broke no new ground and "what's most important now is to turn these words into action by offering presidential leadership to the nation and to the world."

"That's going to require the president to genuinely reach out to our allies so the United States doesn't have to continue to go it alone and to create the stability necessary to allow the people of Iraq to move forward," said Kerry, who himself has been faulted for failing to offer a concrete, alternative Iraq policy.

In his speech, Mr. Bush tried to signal that the troops would not be there indefinitely.

"America's task in Iraq is not only to defeat an enemy, it is to give strength to a friend — a free, representative government that serves its people and fights on their behalf, and the sooner this goal is achieved, the sooner our job will be done," Mr. Bush said.

The president laid out a five-point plan to "achieve freedom and peace in Iraq":

But the insurgents in Iraq have been hampering such efforts, assassinating top Iraqi political leaders and harrying U.S. troops, destroying infrastructure by blowing up oil pipelines and stoking dissent among Iraqis about the legitimacy of the interim government.

"There are difficult days ahead, and the way forward may sometimes appear chaotic," Mr. Bush allowed. "The terrorists and Saddam loyalists would rather see many Iraqis die than have any live in freedom."

In Baghdad on Tuesday, a car bomb near a hotel wounded at least five Iraqis, the U.S. military said. The target of the blast, about 100 meters from the Australian Embassy, was not immediately clear. Elsewhere, some of the fiercest fighting yet between U.S. forces and a radical cleric's militia killed a number of Iraqis and damaged one of the most sacred Shiite Muslim shrines.

Thousands of miles from the military challenge in Iraq, the Bush administration faces a diplomatic test at the United Nations. A U.S.-sponsored resolution outlining the handover of power on June 30 met with generally positive reaction Monday, but France and Germany are demanding that Iraq's interim government be the key decision-maker on security issues. The head of the U.S.-supported Governing Council says the draft proposal falls below expectations.

Then, there is the political challenge: the mounting doubts about the war not just from Democrats, but also Republicans and even retired military leaders.

"I have a feeling this speech was very disappointing to official Washington," said CBS News political consultant Craig Crawford. "He is setting dates and timetables without being clear how those things get done.

"The president will get an initial boom from a lot voters who are not paying that close attention, but as time goes by I think it will become clear the president is laying out a lot of goals, but not how to get there," Crawford said.

Watching Mr. Bush's speech in Dearborn, Mich., Sam Bakir, a 32-year-old Iraqi-American, said, "What he's saying is what all Iraqis want to hear. We want the chance to elect our own leaders and write our own history after 30 years of being force-fed a fate we didn't want."

Edward Goldberg, 66, an investment manager watching Mr. Bush in Brookline, Mass., said he was sad about what he believes is the failure of a war he once reluctantly supported.

"I don't see how we can pull off a smooth transition," Goldberg said.

Secretary of State Colin Powell told the CBS News Early Show that the handover will not be delayed by events on the ground.

"We think 30 June is the right date. The Iraqi people are expecting us to transfer sovereignty at that time and that's fully what we intend to do," he said.

After the handover, Powell says, the U.S. ambassador to Iraq will be "playing the same role as any country" — despite having 138,000 U.S. troops there with him.