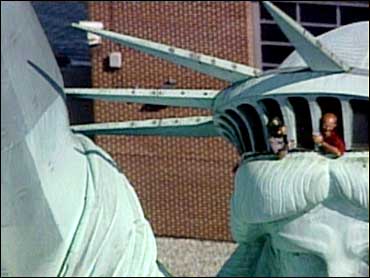 Every day for 27 years, Charlie DeLeo took a ferry across New York harbor to go to work. It wasn't just a job he was headed for, but the love of his life.

"I never got tired of the lady after all these years," he told Harry Smith in a 1997 interview for CBS News Sunday Morning.

Charlie DeLeo is one of those rare people who believes he was born (destined, even) for his job.

After returning from Vietnam with a Purple Heart from a shrapnel wound, the first thing he did was visit the Statue of Liberty.

With the skill and strength of a gymnast, Charlie climbed the girders and rigging that hold the inside of Liberty together, inspecting for debris and changing the light bulbs.

Charlie learned every handhold and every wrinkle in the 31 tons of copper that stand for America's independence and freedom.

From Gus To Guster

The windows in Liberty's crown have been locked for years, but Charlie had a key.

Visitors haven't been allowed in the torch since 1960. Charlie, though, was a regular. He made sure the old flame stayed lit.

"I love being up in the torch. It's like a prayer chapel."

He thinks of the place as sacred.

"I feel close to God and I ask God to bless all nations – not only America but all nations – that want democracy and freedom, too."

For Charlie, liberty and freedom are more than mere ideas. They are living things that require care and nurturing.

"To me, I think her spirit is alive, and I believe my spirit, my soul and her soul are entwined."

Millions come every year to get as close as they can to the statue, to feel her power. Charlie knows its source. His thousands of hours inside have helped the old marine understand what the statue stands for.

"I've seen what war can do. Nobody wins in a war. But the only thing worse than war is slavery. And as long as Lady Liberty is standing on her perch, her pedestal, we're free."

Charlie retired in 1999. Today, Jeff Marrazzo has Charlie's old job. But Charlie still works at Liberty Island as a volunteer.