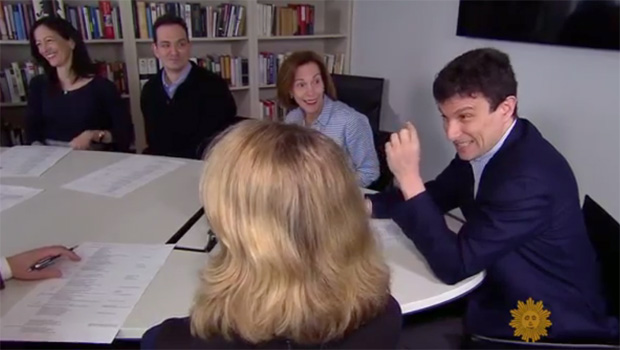 He's the talk-about man behind one of our most storied magazines. He's David Remnick, editor of The New Yorker. This morning, he's talking with Erin Moriarty of "48 Hours":

"I'd never been the editor of anything," said David Remnick, except for his high school newspaper, The Smoke Signal. "I kind of did the whole newspaper on my kitchen table and it came out twice a year. I don't think that really was adequate preparation!"


Since his high school days in New Jersey, Remnick's come a long way. For 17 years he's been at the helm of The New Yorker, which marks its 90th anniversary this year.

Remnick is only the fifth editor of the weekly magazine, and perhaps one of its most influential. It's said that what he's thinking right now, you'll be talking about next week.

He personally chooses the magazine's artistic and topical covers -- occasionally so controversial, they spark an outcry.

Wolf Blitzer: "Can't tell you how many people have said to me, David, if they wouldn't have known this was on the cover of The New Yorker magazine, they would have just seen this cartoon and been asked which magazine has this on the cover, almost everyone would have said some neo-Nazi magazine, some Ku Klux Klan magazine ..."

"You couldn't consider that maybe you went a little too far?" asked Moriarty.

"Well, I think satire is often about going 'too far' enough. If you're not going too far sometimes, you're playing it awfully safe."

Did the magazine lose any subscribers? "Here's what happens: People call up and say, 'Cancel my subscription!' And my silent answer to that is, 'You cancel your own damn subscription!'"

But in person, Remnick seems less firebrand and more good-humored brainiac. The magazine seems to reflect his broad interests: news-breaking articles mixed with fiction and, of course, its legendary cartoons.

And he's expanded the reach of his magazine with a new radio show and a yearly live event, The New Yorker Festival, which attracts newsmakers and celebrities like Larry David.

With the festival selling out and the magazine reaching younger readers on their electronic devices, Remnick became the editor who could turn red ink to black in an age when many magazines are struggling.

"I knew at some level that the impact that I could make was infinitely more if I could be a good editor of The New Yorker than as a writer," he said. "And I don't think I'm a terrible writer or journalist. I'm not bad."

Not bad, indeed. Remnick won the Pulitzer Prize in 1994 for his book, "Lenin's Tomb." By any measure, he's lived a writer's dream life. He wanted to be a newsman, and started at the Washington Post. He did features, even covered sports.

"I covered whatever I was told to, including hockey, which I had to keep somebody on the phone to explain the game to me. I didn't know what the hell was going on!"

Then his life was changed by two events.

"All of a sudden there was a job notice that went up to go to Moscow, and nobody really wanted to go because it's cold," he said.

He became the Post's correspondent in Moscow; and he married Esther Fein, a reporter at The New York Times.

"We literally got married in October of 1987 and went to Moscow," he said.

In 1992, after returning to the U.S., Remnick was hired as a staff writer at The New Yorker by the editor at that time, the flamboyant Tina Brown.

And when she left to start a new magazine, called Talk, Remnick -- a thoughtful and even reticent writer -- was not the obvious choice to fill her shoes.

"I used to tease him -- it was sort of like Joe Torre coming after Billy Martin with the Yankees," said Adam Gopnick, a New Yorker staff writer who has worked for four editors there. He says that Remnick brought stability to the magazine when Brown left.

"You know that, after a brilliant but very high-pressure kind of leader, you want somebody who's equally authoritative but in a much more generous and easygoing way," Gopnick said. "David's great gift is for identifying talent and using it, and creating a circumstance in which talented people feel happy."

Remnick and his wife say their household is also run with that same spirit of collaboration.

"We have a complicated family," he said. "You know, we have two grown healthy sons. We have a 15-year-old daughter who has autism. And that, as any parent with a special-needs kid knows, is an enormous challenge. It's not a mild case. So we have to depend on each other in innumerable ways that I can't even begin to calculate."

"And I would assume that most of the burden of that -- the stress, the dealing with it -- has been on your shoulders," Moriarty said to Fein, "because his job has only become more and more complicated over the years."

"The pragmatics of it is in my hands, but the stress is equally shared," Fein replied.

For Remnick, the worries at home have put the stress of work in perspective.

"To do what I do in terms of works is an immense gift," he said. "And at the same time, you see what real suffering can be. The work is frustrating. The work is complicated. Work is difficult. But it is not shoveling coal, it's not suffering."

Gopnick said, "As far as I know, every sentence that goes in the magazine he passes his eyes over at one point or another in the course of assembling it."

And Remnick is not afraid to make tough calls.

"I remember in the week after 9/11, for instance, David said, 'I'm gonna take all the cartoons out of the magazine,' which is something we had never done in our history," Gopnick recalled. "That was totally his decision. And I thought that it was a mistake because I thought our readers are looking to us for continuity. That turned out to be exactly the right thing to do, and he put together an extraordinary issue."

As editor Remnick brings a cool perspective to everything he does. But he is acutely aware of the responsibility he carries.

Having achieved all that he has, there's one title David Remnick does not want.

"I know that you have told people you don't want to be the last editor of the magazine," said Moriarty.